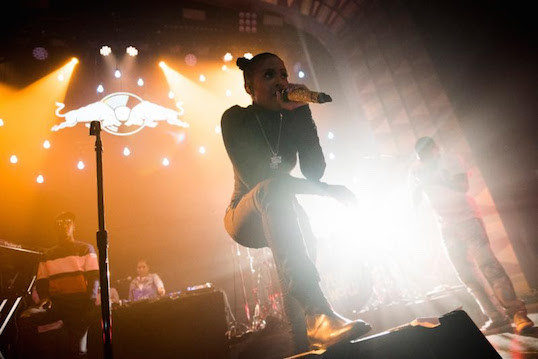 #FOMOBlog: Dej Loaf Surprises #30DaysinLA With Silkk The Shocker, Snakehips Brings Out Anderson .Paak For "Money On Me"

I had to make a trip to the Los Angeles Auto Show at The Convention Center downtown. It was super dope too because this was a media day, so it wasn’t even open to the public yet. Shout out to Junior who was the ultimate plug. He used to work for Power 106 but now works for Galpin Auto Sports. It’s funny because homeboy is usually at every single show at The Belasco and I was wondering why I didn’t see him at Pusha T last night. He had to up at 4 a.m. to set up. Salute to you, fam.

the best part about this @LAAutoShow is ppl thinking i wanna buy a car. na bro, just taking photos of ur cars lmao ?

The whole show was a trip. I’m really not into cars — at all. My knowledge is so limited. I was at Belly’s Inzombia release party and he had just gifted his manager a Spyder, in which I spelled it as “Spider” all night. How embarrassing.

You know Ty Dolla $ign brought back the Maseratis tough with “Blase.” Other than that, couple Ferraris and two $100K Audis caught my eye. I had to text my brother. He wants an Audi, tough. I told him I got him.

The Pink Panther car inside the Galpin Auto Show showroom.

This Pink Panther whip was too clean. I can definitely see RiFF RaFF thriving in it. The event is open until November 27. You guys should definitely check it out if you have time.

Tomorrow at 7pm, we are back with the 2nd installment of "The Creator's Corner" featuring more of LA's dopest talent! This time we're showing love to the geniuses behind the boards for LA Producer's Night. Hosted by @kingthurz feat. new beats and vibes from @djdahi @clearlyitslike @clncwatts and @thxbeats Doors open this Thursday (11.17.16) at 7pm with early arrival highly suggested! RSVP Only. Free food by @freerangela and open bar to match! Pull up! #adidasoriginals #adidasmelrose #djdahi #thurz #pacdiv #thxbeats #cwatts #community #culture #melrose #losangeles

Fast forward nine hours (of work), to adidas throwing the most lit event in Los Angeles in a minute. I know I throw that word around a lot, but this was for real. Free food, free alcohol, dope beats/music, and 15% off all merchandise in the store. All you had to do was RSVP to this link. Special thanks to my homegirl spreading the love. I definitely spread the word also.

And shout out to Thurz hosting! The lineup was crazy too. So many dope producers (DJ Dahi, THX, Like of Pac Div, and C Watts) with a resume that will blow your mind. Everyone was packed inside the adidas Originals shop on Melrose in West Hollywood.

I have to point out the free food. You know how most events say “free food” and you get there, and there ain’t shit? This was the opposite. They legit fed you. I’m talking fried chicken sandwiches. And free liquor. Dang, adidas. You really had this shit for free? Salute. Everybody was there for it.

It was nothing but great energy amongst everyone that showed up. Shout out to League of Starz and Nick Grant in the building. This was just the beginning of the evening. The 7-10pm time frame was actually perfect for most of us with other commitments. Hello, Thursdays.

Bardot in Hollywood was the next move. This was the Matrix Artists Happy Hour to celebrate FKi 1st’s birthday. Beyond being Post Malone’s DJ, he is really starting to blossom as an artist. I’m a huge fan, and was happy to finally meet him. Thank you Jennifer, who manages 1st, for the invite.

There were actually two birthdays to celebrate tonight. The other was Mijo, who does A&R work for Chris Brown. Watching him and his homies do the #MannequinChallenge when the DJ dropped “Black Beatles” was comedy. I had to capture Jennifer bringing out 1st’s cake. Precious.

Last but not least, Hopsin at The NOVO in Downtown L.A. A lot of people have been asking when I sleep, and I honestly ask myself the same question. This was a late show too, which meant Hopsin wasn’t coming on til after 1 a.m. It was actually 1:30 a.m. BRUH.

Thanks to Goldenvoice for the all access pass. We were able to kick it backstage. Joyner Lucas was opening, and my homie said we had to catch his set. He was right as Joyner went in. He can definitely rap and his army vest reminded me of Flosstradamus, who I super fuck with.

The moment I walked in the venue, my first thought was, “Damn. This shit is empty.” It was literally the opposite from when I was here on Monday for Rae Sremmurd. It’s interesting because I actually discovered Hopsin when he opened for Andre Nickatina. I fell in love with “Pans in the Kitchen,” mostly for the beat and his performance.

That being said, I haven’t really kept up with Hop, especially the drama with him leaving Funk Volume. I do think there are die hard Hopsin fans, but there are also many haters as well. All I know is, the crowd was weak from what I could see. I’m surprised they caught him when he leaped into the crowd. He also stood up on his two feet (on top of the crowd) for a couple seconds, Tory Lanez status.

The shirt came off mid-show. Homeboy is ripped. And I super dig his colored contacts. I’ll stop there.

Ask me who my favorite rapper is right now, I would have to say Saba. His Bucket List Project has been on repeat. That says a lot. I feel like nowadays there is so much new music, it’s impossible to keep up. This project stuck with me hard. It’s just the kind of Hip Hop I can vibe to. I’ve been trying to get my homies on him tough. I compare him to Isaiah Rashad.

Saba is actually featured on the track Chance’s “Angels” on Coloring Book. Artists from Chi-Town continue to deliver. Shout out to Rory for getting me on the list, and letting me know about this show. He was on at 9pm at Los Globos on Sunset. This venue in particular usually has the underground acts come through. It’s tiny, but perfect for Saba. The crowd was small also, but everybody there knew all the words. He’s definitely got fans, and those fans know what’s good. Saba is the one.

Every single track he performed was amazing. I had the hardest time choosing which song to post. I went with “Church/Liquor Song.” “West Side Bound 3” was a close runner-up. I was totally by myself and had the best time. Feels.

Next up, Dej Loaf at The Regent downtown. I’m going to be completely honest, I’m going to miss this shit when it ends. The Red Bull Sound Select #30DaysInLA concert series has been a blast, and it’s almost over. I have to shout out Jeremy and Kate who I met tonight. They have treated me so well <3.

Hold up. Dej Loaf graced the stage looking like a brand new person. Like damn, she was looking sharp, and feeling sharp. We all noticed. My homie goes, “It was the check.” Ha. Maybe?

This night was unexpected, she brought out the homies, including one that left us all in shock: Silkk The Shocker. Whoa. That’s definitely OG status: the Cash Money/No Limit era. The have a track called “Bout That” together, which I’m bumping right now.

Dej is talented, man. She sounds bomb live too. I always said I love her voice, it’s so unique. And she can spit. Highlight if the night: Casey Veggies pops up to perform “Tied Up.”  That’s one of my favorite tracks. . . ever. Kid Ink was the cherry on top. Shout out to DJ Carisma spinning, always throwing down the slaps.

7am at Grand Park in downtown Los Angeles.

My Saturday started way too early, but no complaints. This was United Way’s Annual 5K Family Run/Walk to end homelessness in Los Angeles County. It was held at Grand Park downtown, which I surprisingly walked to. It took me 14 minutes. I just moved downtown, and I’d be lying if I said traffic doesn’t suck. This made up for it. I didn’t have to worry about the parking chaos.

Wise words in the middle of Grand Park.

For those of you who don’t know (most of you), I’m a part-time grad student at USC’s School of Social Work. The question, “Do you sleep?” has become a running joke. But anyways, we had a good group representing from our program, among the 15,000 people that came out. They ended up raising over a million dollars. How amazing is that?

I had every intention to run the three (.1) miles, but it ended up being blazing hot. The nights have been getting chilly in LA so I thought I was doing myself a solid by rocking two layers. Fail. The sun was not playing today. This walk was a little more meaningful to me, as this year I am placed at a homeless shelter for my internship. It’s crazy the circumstances these ladies are in, that leads them to where they are now. I think we all take housing for granted. It’s hard for me to accept that many don’t even have a roof over their head.

Got such a dope show planned for yalllll ????

I should have known from this tweet. Tonight was such a treat, especially for Snakehips fans (me). I was at their last show at The NOVO, and this does not even compare. For those who don’t know, they are a British electronic duo, and they remix the most popping songs in R&B. “Dimelo” with Tory Lanez and “Wanderlust” with The Weeknd are definitely at the top of the list.

Shout out to Red Bull Sound Select #30DaysInLA again. They are literally killing the game. This show was at The Wiltern, where I just saw Post Malone. Yes, it was sold out. Yes, everybody loves Snakehips. And it was Saturday night. I feel like every single person I saw was turnt.

They played a solid one hour and 30 minute set. The special guests tonight were one for the books. Raury came out for “Cigarette Song,” followed by AlunaGeorge. That’s bae. She is exceptionally talented. She’s on the Red Bull lineup as well, which goes without saying that I’m super excited for that performance as well.

I was also geeked when they brought out Anderson .Paak for “Money On Me.” Totally forgot that collab existed. Literally right after, they bring out Big Baby D.R.A.M. for “Broccoli.” Okay Snakehips, I see you.

They closed out with my favorite song by them: “All My Friends” featuring Tinashe and Chance The Rapper. The entire venue was in their feels.