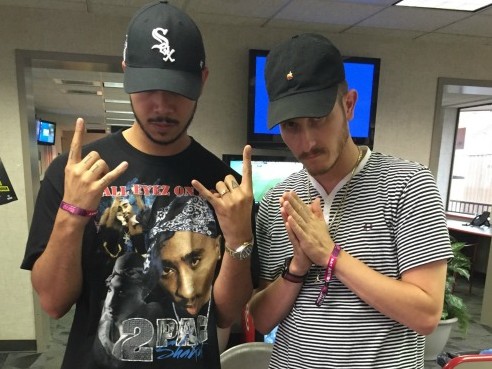 Fontana, CA – Chicago duo Flosstradamus, comprised of J2K (Josh Young) and Autobot (Curt Cameruci), are the pioneering conductors of trap and EDM. This can be confirmed by any fan of EDM and Hip Hop, as well as the mere fact they recently headlined two major festivals: Hard Summer Music Festival in Los Angeles and Lollapalooza in Chicago.

HipHopDX recently caught up with trap duo right before their closing set at the main stage the Hard on Saturday, July 30 to discuss their epic set at Lollapalooza, bridging the gap between EDM and Hip Hop, wanting to collab with Dej Loaf, and Shaq being a dope DJ.

Held at the Auto Club Speedway in Fontana, CA this year, the festival conditions were rough, to say the least. Aside from the struggle of the 100-degree heat to the tremendous lack of organization from the venue, we found Flosstradamus to be two of the most chill, down-to-earth beings, especially taking into account they have maneuvered through the underground and suddenly appeared on top. Both are truly in it for the love of the music.

HipHopDX: How was Lollapalooza?

Flosstradamus: It was crazy good. It was our 10-year anniversary of us doing Floss. It was also the 25th anniversary of Lolla and we got to headline. We brought out Dwyane Wade, Chance the Rapper, Michelle Williams, Post Malone. It was just crazy.

DX: How was connecting with all of them, how did you get them all to come out during the set?

Flosstradamus: It was magic honestly. Just like the powers of being there. Chicago is what made it happen. Found out Michelle Williams is from Chicago, she’s friends with D-Wade. We put other Destiny’s Child songs in our stuff before. She wanted to do “Survivor,” so we made a version for her and it was perfect. It fit with us because we’re survivors.

DX: So you guys perform all over the world, is each festival different?

Flosstradamus: They all are. They all have their own thing. The main thing that I like in festivals that I personally go to are the ones that have collected artists, more than just a specific genre. We played at a lot of EDM festivals but, the ones we like to go to have Hip Hop acts, Rock and Roll acts, all different types of music.

Flosstradamus: Nope, just the L.A. crowd. We’re not going to bring anybody out that we know of. We just got here so maybe we’ll see somebody and bring them up. It’s something that we don’t do very often actually, have a lot of guests come up. We do it ourselves. Coachella for instance, it’s all about special guests, it was almost more special that we didn’t bring out a guest. We had to in Chicago.

DX: I’ve been a fan of yours since Total Recall. How do you feel about the way Hip Hop and EDM has transitioned from then until now?

Flosstradamus: It’s dope. This festival is a really great example of a festival that started out as mostly a dance festival. So it was mostly EDM artists and even us, we were too Hip Hop for this festival. Eventually, they started booking us, RL Grime, Baauer, stuff like that. I felt like we opened the doors a little bit to having actual rappers and Hip Hop artists actually come in. We look at ourselves as the conduit. And we bridged the gap between Hip Hop and electronic music. This festival is a really good example of that. Right now Travis Scott is on. That’s fucking crazy.

DX: How are you guys doing with the fame? Is there a lot more recognition in public?

Flosstradamus: There is that, but as for people, we pretty much haven’t changed. We grew up in the Midwest. We were raised with values. The only thing that’s changed is our bank account. It’s not even like fame. If you look at us we’re cult still — it’s not like we’re Lady Gaga or Bieber. If it was like that, it’d be brutal. We’d have to answer that question. But realistically, we have a cult fan base and they’re all generally really cool, so 9 times out of 10 if we do get recognized, it’s someone who really likes our music and knows our stuff. They know it, and it’s pretty cool.

Flosstradamus: It was so natural. We’ve done music with FKi. He’s a great MC and great producer. He’s a low-key producer- I find out that he makes those songs later on. We’ve done a lot of stuff with him. This one was just another one of those things. We got up in the studio and magic happened. Post is just open to everything, just down to do whatever. So opened-minded.

DX: Are there any artists on your hit list that you do want to collab with?

Flosstradamus: Yeah, I was thinking about this today. Dej Loaf. I’m a huge, huge fan of hers. Never got to cross paths with her, but when it happens I’ll have to throw her my demo. She’s just so unique.

DX: What do you think about the current state of Hip Hop?

Autobot: It’s awesome right now! Right now Hip Hop is in this no fucks given right now. Sometimes rappers might not even rhyme a bar. The style is so freestyle — like a post-Lil B thing going on right now. I like it full on. I think it’s cool because the one thing that we like to do and that we’ve done so far, is that the old heads if they start talking shit on you, like “that’s not the way it should be,” then you’re doing something right. I feel like that’s what’s going on in Hip Hop right now. There’s a bunch of old heads right now that are mad at what’s happening, and I think that’s the best thing. It’s pushing it forward and it’s making it fun again.

J2K: I like the energy. When I came up, my intro to Hip Hop was when I became a fan and started going to shows. It was during the Stones Throw and Rhymesayers atmosphere, that Midwest, backpack era. Something that was really cool, they were really anti like, sitting in the corner with your arms crossed and being all pitchfork about it. I think T Scott even has a logo that’s just a dude with a line through it. If you’re literally not partying and not turning up, then you shouldn’t be there.

DX: I recently saw Desiigner perform, and he must have jumped in the crowd at least 10 times.] What do you guys think of Desiigner?

Autobot: He’s dope. He has great energy. I feel like with a lot of the artists they have a long way to go as artists, but it’s cool right now that everyone’s accepting it. Even Famous Dex from Chicago too, he’s just super loose, it’s just a freestyle kind of vibe.

DX: How do you guys feel about Shaq playing your music?

J2K: That old man mentality, not too cool for school or overthinking it. He doesn’t give a fuck. He’s up there playing music and jumping around like a fan of it. It looks genuine. It doesn’t look like trying to get a G off it. It’s really cool.

DX: What do you guys do to unwind, what’s your favorite hobby?

J2K: There’s this app called headspace. I spend my life on that.

Autobot: I unwind with CBD marijuana.