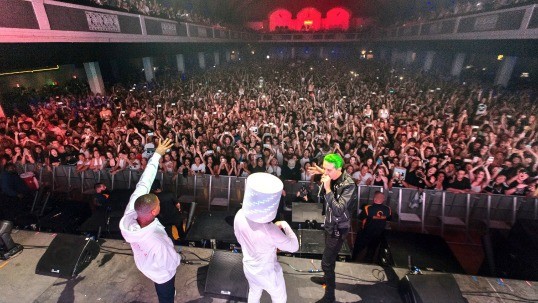 November is here, which not only means Thanksgiving, but it also means the start of Red Bull Sound Select’s #30DaysInLA concert series. Yes, it’s exactly what it sounds like: a show every day of the month. In other words, it’s lit. They even threw an event in Hollywood when the lineup was announced to celebrate, so you know it’s real.

Tonight was Pell and Tory Lanez at The Echoplex in Silverlake. I was actually most excited to see Pell, as I had just seen Tory last night at 92.3’s #RealShowLA. I knew this was going to be different, though. The Forum is massive and Tory thrives in intimate settings. If you follow him at all, you’ll know he gets a little crazy (climbing walls like Spiderman).

Timeout. All the media were greeted with a free jacket and T-shirt designed by Shane Gonzales, whose main client is A$AP Rocky. I was ecstatic.

Unfortunately… we completely missed Pell’s set. It was a huge bummer. We were given set times prior, and it said 9pm. I guess they changed it to 8:45pm. Smh. There was a long intermission before Fargo hit the stage, but it was well worth the wait. Seeing Tory perform in a small venue was a whole different ballgame.

Tory Lanez is so talented. He can sing his heart out one second and then spit like an MC the next. Hearing “Say It” and “Luv” live always hits the spot. He also took some time to tell us a story about how he got fired from Denny’s. He said he walked away from there and promised himself he would never ever “clock in and out for any motherfucker again.” It was inspiring as hell.

But really, how does the crowd not drop him? He closed his set with “Diego,” turnt as ever.

Shout out to #PaulWall Scoop DeVille & TV Johnny for chopping it up with us about #Grillz ? Exclusive interview coming soon! ?

I had the absolute pleasure of interviewing Paul Wall and TV Johnny tonight at Loews Hotel in Hollywood, CA. What’s the first thing when you think of when you hear Paul Wall? Grillz. And that’s exactly what we talked about. Everything grillz. He was honestly so kind and polite, it took me by surprise. I love that about an artist. Personality is everything.

Shout out to producer Scoop Deville who chopped it up with as well. It was nothing but great energy all around. I really wanted to do the #MannequinChallenge with him and his homies, but unfortunately, we got booted by security. Huge thanks to Aishah for setting this up.

Who is a fan of “White Iverson”? I remember hearing this track and immediately demanding to know who the artist was. This was Post Malone’s breakout hit, and I’ve seen his career take off since. This was the last stop on his Monster Energy Outbreak Presents: The Hollywood Dreams Tour at The Wiltern in Los Angeles.

I should clarify my tweet. It wasn’t completely sold out, but it was damn near. Shout out to Janette with Live Nation for the wristbands for the pit. Fact: the closer you are to the artist, the better the experience. I’ve seen Post perform in clubs and he always had the most lit energy. This was no different.

White Iverson ? #PostMalone on the last stop of his Monster Energy Outbreak: The Hollywood Dreams Tour in #LosAngeles ?? @postmalone

He played my favorite track, “Money Made Me Do It” which features 2 Chainz, along with “Tears,” “Fuck” featuring Jeremih, and “Deja Vu” featuring Justin Bieber (no shame). He closed out with “White Iverson,” the same song he opened with, because it’s that good. Thanks to Lisa at Juggernaut Sound for the tickets.

Introducing Musicology. This is the homegirl Brittney’s event at the Ivan Theater in Hollywood, CA. I’ve been to one of these before, and the concept is super dope. It’s an educational panel for those in the music industry, along with some dope performances. Tonight focused on songwriters.

I love what she’s doing with these. So many people want to pursue a career in music but don’t know the steps to take. That’s why she holds these events, so anyone can come, network, and learn from some of the greats. I myself am educated even by getting to know the people on the panel.

The red carpet was chill, all the panelists came through. It was dope to meet Candice Pillay, the Brazilian songwriter who had her vocals on two tracks on Dr. Dre’s Compton album. We’ll be chopping it up with her real soon. Stay tuned.

Tonight, I especially came out to catch Stoppa’s performance. He actually opened up for Dizzy Wright and Demrick at The Roxy, but I had missed his set. I heard it was lit though, and I caught that energy tonight. He puts on for H-Town.

It was so crazy to see Sterling Simms up there, talking about how he literally one day decided he didn’t want to be an artist anymore. You guys remember the track “Jump Off”? He was poppin’. Now, he’s a very well-established music executive. It’s interesting to me because he was an artist that had reached a certain level of success, and he still called it quits. Always follow your heart. Salute.

The other panelists included Micah Powell, the man responsible for Jhene Aiko’s famous “eat the booty like groceries” line, Al Sherrod “A-Rod” Lambert, the man who wrote Ariana Grande’s “My Way,” and Mars (1500 Or Nothin’), with a resume of Chris Brown, T.I., R. Kelly, etc. It’s crazy when you think about the process making a record. If you’re like me, oftentimes you forget songwriting is a career in itself. This event shed amazing light on these talented individuals.

Los Angeles! 3 nights at the shrine start tonight. I'm so excited, we are about to have the biggest mellogang party ever! I can't stop smiling ❤️

My next move meant a lot to me, and hopefully even more for my brother. I feel like I’ve worked my ass off for years and years and I’m finally able to repay him with a simple show. This wasn’t just any show. It was Marshmello, the mysterious EDM DJ with a “marshmallow” head, similar to DeadMau5.

All I know is, homeboy has 1.3 million followers on Instagram, and he is lit. My brother said he tried to get tickets but they sold out instantly, all three shows. This is starting to become the criteria for a show at The Shrine. Shout out to Jessica at Goldenvoice for the tickets, I was honestly really excited to be able to bring my brother. He’s my biggest support. Family over everything.

The best part was seeing a handful number of fans actually dressed up as Marshmello. There is so much unknown behind this artist, who never shows his face. Right when the show started, it was a lituation. He literally had the best visuals and laser beams that coincided perfectly with the music. He definitely knows how to throw down a set, and the entire time he’s jumping up and down with a box on his head (which lights up, by the way). My brother said there’s probably a little fan in there. That made me laugh.

And then I lost my shit. First, he brings out G-Eazy, who literally gets the crowd so hyped performing “Me, Myself, & I.” His hair was still blue from being The Joker on Halloween (I loved it). And then out comes YG. Not sure there could have been a better time to see “Fuck Donald Trump” live.