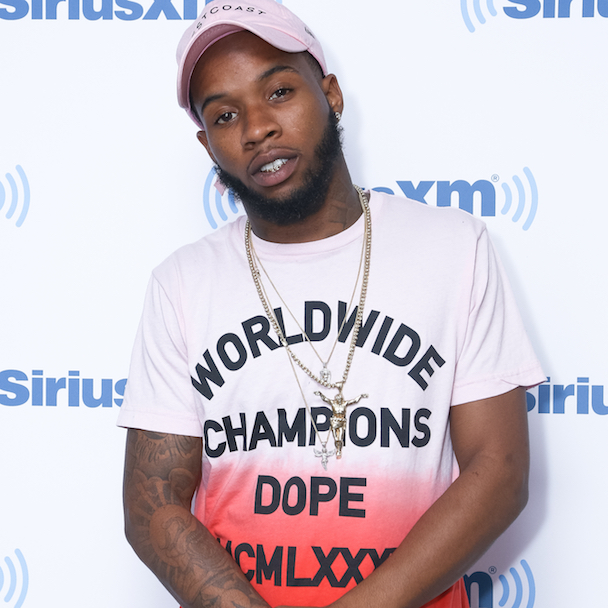 Tory Lanez Says “It’s Over For Everybody”

Toronto’s own Tory Lanez, who also goes by Argentino Fargo, has been on the rise at an exponential rate, riding this new wave of R&B. He shows no hesitation in owning the fact that he is one of the originators of this new sound. One listen, and you can tell he draws his inspiration from old school R&B and the classics. With hits like “Say It,” which recently climbed to the #37 spot on the Hot 100, the sky seems limitless for the 23-year-old.

Catching up with Tory, it is nearly impossible to not notice the drive and motivation as he speaks and carries himself. Being the youngest of six and losing his mother at a young age has molded him into the kind of artist that’s more prepared to suffer the slings and arrows of the game than most. It’s no wonder, as he has steadily crafted for himself a persona that stands out, somehow, from the dizzying number of artists currently occupying his lane. A pivotal moment in his career was his feature on the intro of Meek Mill’s Dreams Worth More Than Money album, blessing the track “Lord Knows” on the chorus.

He is currently on his Swave Nation Tour, in which he is headlining. He is set to release his debut studio album this coming year.

Working With Meek Mill, His Take On The Beef & Drake

DX: What was it like working on Meek Mill album?

Tory Lanez: It was incredible. For me, I did the “Lord Knows” record. It’s crazy, I was actually gonna throw away that record. I personally didn’t like the record until Meek went on it. I thought it sounded too much like my other records. That’s why I was like, “I should probably just give it to somebody else.”

DX: Were you surprised when Meek called out Drake like that?

Tory Lanez: Nah. To be honest with u, for me personally, I just don’t care about that whole situation. I don’t have any view, no point, nothing.

DX: Who do you think won between the Meek Mill/Drake beef?

Tory Lanez: Honestly to me personally, I look at it and just say they’re both talented artists. They’re both incredible. I wouldn’t really give it to anybody. They both gonna still be who they are. I’d be wrong if I say this person won or that person won.

DX: What was it like stepping out from Drake’s shadow?

Tory Lanez: When was the first time you heard about Bigfoot?

Tory Lanez: Exactly. It was something that never really happened, like a myth. I couldn’t tell you how it would be because I’ve never been in the shadow.

DX: You are a songwriter. What was it like writing for other people? Where are you at now with it?

Tory Lanez: It’s always a blessing to be able to write for other people or add to other people’s craft. Just giving them the extra penmanship when they may not have thought about that idea… or thought about something that I may have worked on. Even with production and stuff like that, i like to just contribute to people’s projects.

DX: How do you feel about this new wave of R&B, all with a sound similar to yours. For example, Bryson Tiller?

Tory Lanez: I fathered this whole wave. There’s a certain sound. There’s a certain grid and a certain realness that I’ve seen. There are certain things that I’ll say… I always keep it blunt, whether or not it’s in the music or out of the music. I know for a fact, a lot of the stuff that niggas are doing now is just not new. Things we touched on years ago. And I’m not talking about anybody, in particular, but when we say this whole new wave of artists, in general, you gotta go back and listen to older projects of mine. And you’ll understand where everybody come from and get their style from. At the end of the day, we all just here to make good music. As long as it sounds good, I have no problem being an innovator.

DX: I was at your show in LA at The Roxy. It was beyond lit. You actually had fans fly out from Toronto to the show. How do you feel about your following there compared to here in the States?

Tory Lanez: It’s the same. It’s weird because, in most hometowns, they’ll support you before you go out there. But in Canada, it was different. They supported me because I was the underdog. But in most cases it’s not like that, you have to get respect from America first. You need that cosign from America first, and then that’s when Canada will jump on it. And be like, “okay this is really a thing.” That’s how it’s been for all of us in the past. Now it’s a little different. When I go to America, it’s crazy. Then when I go to Canada, it’s crazy. It just feels the same now. It’s never felt like that. To me, if I was to choose, the craziest thing for me is Europe, I’ve never seen shit like that.

Tory Lanez: Everything! The lifestyle… The girls are crazy out there. Niggas is mad wild. I’m sorry, I don’t know if I should be cursing. It’s just mad crazy. There’s so much to do, so much to see. It’s just a different culture.

DX: Your DJ is your brother right? How did that happen?

Tory Lanez: He’s not my real brother. [Laughs] Everyone thinks that. We kind of look alike. It’s actually crazy. He was a dude I met a while ago in Canada. He goes by BC. Basically, it’s weird because the way we met was on some… we were about to go handle something, on some street shit. It ended up being years later we connected off some music. We didn’t even know. I didn’t connect it until 2 years later that we were on the same mission. When we connected it, later on, we were like “that was you right?” Ever since he been rocking with me. That’s my dog. He’s pretty much like my brother regardless.

DX: What was it like growing up being the youngest of 6?

Tory Lanez: As the youngest, I just had a sincere love for my mom. You know how when you’re the youngest, your mom always kinda feel like “that’s my baby.” I feel like I got a little extra love. When I was coming up, I depended on my mom. Then when she died when i was 11, the whole youngest thing kinda left me. I had to start making older kid decisions.

DX: What did you do with your first advance?

Tory Lanez: If I told you, I’d have to kill you. Na. Let’s just say my first advance made me money.

DX: What’s going on with the tour?

Tory Lanez: It’s my tour, the Swave Nation Tour. Everything sold out. It’s the first time I got the tour bus and  Interscope’s been back and everything. I’m just happy right now because I’ve never seen just back to back to back to back sold out. Everywhere sold out. For me, it’s just like a blessing from God. I’m just thankful for that. I’m thankful God has put me in this position to able to talk to the kids. Every night just being able to give them what they want.

Tory Lanez Says “It’s Over For Everybody”

DX: What can we expect from you in terms of new music?

Tory Lanez: Well I’ma tell you this. It’s over, for everybody. I need HipHopDX to understand this is a big thing. Whatever the headline is, Tory Lanez is saying “It’s over for everybody.” As soon as new music drops, nobody is gonna be on the same level, I know that for a fact. I personally feel like there’s nobody fucking with me. All these kids out here, rappers, singers, all your favorite artists, they’re all going to have to take the number two right now. If you’re in the number one spot, you gotta slide over to number two. I’m completely confident. I’m completely ready. I’m in the best shape of my life. I just feel like no one can stop me. At the end of the day, I haven’t even begin to even get to anything that’s remotely close to what they call a peak. I’m just getting warmed up. My warm up game is about kill everybody in the championship round. It’s that serious.

DX: I have to ask, how are the ladies?

Tory Lanez: [Laughs] The ladies I’ve never struggled in that department. They’re beautiful as ever.

DX: Is it overwhelming?

Tory Lanez: As a man, you get overwhelmed from a lot of girls. I just try to do whatever i can to have them to make sure they have a memorable moment with me. My female fans are some of the most important. When I see them, I always take every picture. I always make sure they’re respected. I direct and edit my own videos, I always make sure the females in my videos, even if they are super curvaceous… I always make sure they’re classy. They always look very artistic and classy. I never try to make the girls look trashy or anything. The only video that I have on some ratchet shit, cause they asked me to have some ratchet video, was this freestyle I got. I went on this “Shit” beat from Future. It was meant to be wild. Even in that, we all look cool. Females are always important to me.

DX: Anything else you want to say to HipHopDX?

Tory Lanez: Yo, I need ya’ll to know, I’m coming for the game, the biggest artist in the world. Everybody on DX, some of ya’ll probably gonna hate, some ya’ll probably not gonna like me, but it’s ok. I’m used to not being liked. I love the fact that everybody who’s watching this or pays attention to this, they supporting. All the people that go on the site just know, Tory’s here. That’s the most important part.