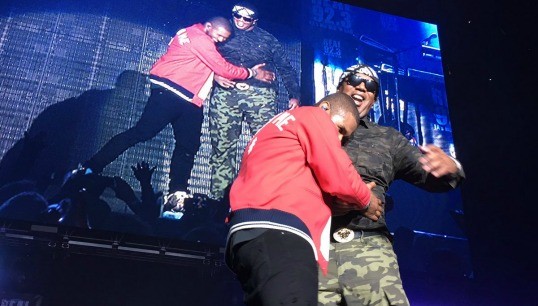 Whoever thought of the name Dillstradamus is a genius. Dillon Francis and Flosstradamus headlining a show? There’s no way I was missing this. These are my baby daddies of EDM. I actually had the pleasure of interviewing Floss at HARD Summer. They are some of the most down-to-earth guys out there.

Dillon Francis at the sold out Shrine in Los Angeles.

Dillstradamus Presents: IDGAFOS HDYFEST 3UNION. This was night one of their three sold-out shows in Los Angeles. Dillon Francis took the stage first, then Flosstradamus, then both B2B for ten minutes. The Shrine was packed. We’re talking people bumping into you left and right and drinks spilled with no apologies.

Dilly had the whole crowd chanting the letters IDGAFOS, which stands for “I Don’t Give a Fuck or Shit.” No one did that night. Funny story. I was granted a photo pass for the show but they didn’t let anyone in the photo pit because, fire. The stage was lit, literally. You could feel the heat when they ignited the flames.

The visuals during Dillon Francis’ sets are always to die for. They are comedy mixed with trippy. One minute it’s Dillon’s face, the next it’s eggs, then it’s burgers coming to life, or headshots of Dwayne Johnson (The Rock). The songs Dillon remix always hit the spot, especially “Coming Over” by Kygo. This reminded me everything will be okay.

i fucking love these guys so much. @FLOSSTRADAMUS pic.twitter.com/QJjdngCfW6

There was a 30-minute intermission before Flosstradamus took over. And the takeover was real. I realized it was to set up the stage. These guys really showed out tonight — in the best way possible. If you guys fuck with trap, you fuck with Floss. Their set had us twerking.

P.S., their army vests are my favorite.

Tonight, I had the best movie experience of my entire life. Go see Doctor Strange in 4D and I promise you’ll be saying the same thing. Regal L.A. Live is home to the first 4DX theater in America. And it’s right there in Downtown L.A. A lot of people asked me what 4D meant, and I felt it was self-explanatory. I like to call it 3D on crack. Per their website, the “4DX auditorium features motion seats and special effects including wind, fog, mist/rain, scents and more that perfectly synch to the on-screen action.”

This was legit. The moment we sat down, we felt like we were in an amusement park. The chair literally sways and moves in sync with the action in the movie. There was even a Water On and Water Off button. You know mine was off. This movie was ridiculous in 4D. I could definitely see this poppin’ off.

Well, minus the fact that it’s a $28 movie ticket. It was definitely worth it for the experience, though.

Don't miss @chancetherapper at our #RealShowLA & on #BigBoysNeighborhood this morning starting at 6:20a LIVE link in bio.

Wow. So much happened tonight I don’t even know where to begin. All I can say is no one expected to witness one of the most epic shows Los Angeles has had to offer in a minute. No one. This was Real 92.3’s #RealShowLA featuring Kap G, Belly, Desiigner, Kid Ink, Ty Dolla $ign, Tory Lanez, Bryson Tiller, Chance The Rapper, and Usher. What a damn lineup. Shout out to my homie Mel who deejays there and laced me with the set times.

Special thanks to Amy with iHeartMedia for the tickets. We pull up to The Forum in Inglewood, which still had Kanye West’s Saint Pablo Tour vibes lingering. Kid Ink was on the stage doing his thing. I was a little concerned at that point, the venue was a bit more bare than I was used to. I was wondering how 92.3 would sell out such a big venue.

That concern went away the moment Ty Dolla $ign hit the stage. Literally, it went from 0 to 100, and I noticed the seats were getting filled by the minute. The show started at 7pm, which is mad early. People were probably just getting their liquor on. Being from L.A, you already know Ty has the juice. So much juice in fact, he brought out Cam’ron and Juelz Santana to the stage. #DIPSET.

This was just the beginning. He also brings out Joe Moses and Wiz Khalifa, who always has a blunt and the biggest smile on his face. #TGOD. Next up was Tory Lanez, who I have seen grow since day one. He brought the energy to the venue, and even got a little ratchet: “Ladies if your pussy clean, say owwww!” He closed out with “Super Freaky” featuring Rick Ross. How fitting.

Bryson Tiller was who I was most excited for. Not that I haven’t seen him live, but TRAPSOUL was my life. (It still is, actually now that I think about it.) He brings out Big Sean, which was a huge surprise to everyone. I thought it was a little random, but hey. Sean Don played his newest single “Bounce Back” which, in my opinion, goes.

Pen Griffey also reveals this is the last show he’s doing before his album drops. That made fans (like me) all too excited. “Don’t” had everybody feeling themselves. Next came Chance The Rapper in his Yeezys. Everything was great; he was doing his thing performing his hits and then, all of a sudden, he walks off stage. We were all very confused. It looked like he was angry. I just felt bad for all the people who paid to come see him tonight. They were the most affected.

Usher stole the show tonight, hands down. He literally graces the stage in the most blinged out jacket and shoes. First off, Usher is the OG, and he is undeniably talented. Not only that, but he’s such a great performer. He’s got the same dance moves he had 10 years ago, and they are just as fresh. Can’t forget about his choreographers, either. They always slay.

wow @Usher brought out @chrisbrown at #RealShowLA and i think every girl at the @theforum jizzed their pants. including me. @Real923LA

That moment Usher brings out Chris Brown and the ladies lose their mind. No lie, if you were at the show, you know what I’m talking about. The high pitched screams lasted from the moment CB hit the stage until he got off. Okay, I’m playing it cool. I lost my shit too. But hey, he’s my number one. He had a solid run where he showed out his dance moves too. I wonder who would win in a dance-off?

And then the greatest surprise of the night. Fresh of Usher’s “No Limit” performance, he brings out the GOAT, Master P. I’m not even going to front, hearing the No Limit boss spit “Make ‘em say uhhhh” in real life was kind of surreal.