A Day In Harlem With Cam’ron & Dipset 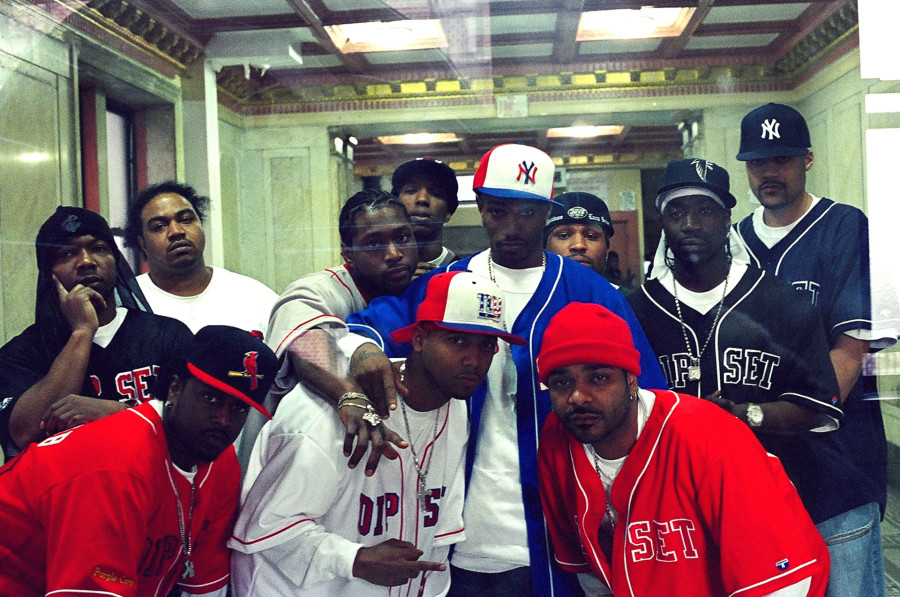 Eric Johnson’s studio, Upstairs At Eric’s, is located in a three story walk up. There’s a huge partition separating the cyc and seamless from the living room. Several Ikea ClosetMaid Cubeicals align the back wall, holding what seems like a century’s worth of vinyl. There’s a vintage point and shoot camera resting on the couch as a Bengal cat named Cooley prances around our peruse through Johnson’s catalog of history…

In 2002, Johnson shot the cover and insert for Cam’ron’s seminal Come Home With Me. This was the first release under The Diplomats’ partnership with Roc-a-fella Records. The project debuted at #2 on Billboard, eventually went platinum, spawned two Top 4 singles in “Oh Boy” and “Hey Ma,” and would become the most important album of Cam’ron’s career.

“I was really psyched to do it because I was really into Cam’ron’s music. I didn’t think that I was the most obvious choice for that project. I was psyched, for sure.”

“They really did their thing on that project,” Johnson recalls. “I was really psyched to do it because I was really into Cam’ron’s music. I didn’t think that I was the most obvious choice for that project. I was psyched, for sure.”

The shoot took place in Harlem in Juelz Santana’s apartment building. Everything looks as gritty as a grey day in New York City, except for the clean Dipset baseball jerseys the entire team is rocking. In this collection, there’s a gripping profile shot of Santana entrenched in smoke, fitted backwards, du-rag dangling, eyes low. There’s another image of a wall with magazine cutouts of Biggie and Tupac connected diagonally by the phrase “Sky’s The Limit”—a nod to the Life After Death classic single. Near the ceiling, part of the plaster is cracked off. A few hazy shots of The Diplomats playing cards and sipping Hennessy are included as well. These are the moments Johnson relishes:

“The shots of them playing cards, that was just a place where they would go and hang out and do what they were doing there—play cards and drink, you know,” he describes. ”I was super intrigued with the location that was in the downstairs basement. It’s interesting to stumble upon scenarios like that because I can just visualize so many nights with them hanging out there and doing their thing. How would someone really get into a scenario like that and be able to catch that? That’s one thing that I think is really great about what I get to do—to really peep into things that people would never see. It felt very much like their crew’s hangout. Anyone who’s a fan or anyone who’s curious about them would never get a peek at something like that, especially with my way of shooting.”

But unlike the Cash Money Records shoot HipHopDX featured in July, there’s a mix of editorial and promotional images. There are a number of group shots with jail poses, for example.

“You’d see some things that would be documentary the way the Cash Money shoot was,” Johnson continues. “Even though I like that style of documenting, usually for the record company to be really effective, there would need to be some things that are more of a connection between them and the audience because they’re selling something.”

“At the end of the day, I feel like I have a style that makes people connect with my images on a street level,” Johnson concludes.

The picture of Cam holding the baby on the Come Home With Me cover, for example, was taken in the same room as the apartment with the couch and matching curtains, then layered into a collage by art director, Kyle Goen. The same with the one of Juelz, Cam, and Jim Jones on the back cover. “I know that we were toying with a couple of other locations,” Johnson remembers before revealing, “there was talk that maybe we would hook up with Jay Z somewhere. Somehow that never really panned out.”

Both the Dipset and the Cash Money shoots capture two of the new millennium’s most iconic collectives at the juncture just before eruption. While Come Home With Me served as Cam’s introduction to mainstream America, he’d already reached rap relevance through 1998’s Confessions Of Fire and 2000’s stellar S.D.E. He could’ve easily opted for a shinier presentation. (According to Johnson there were whispers from within the label that the shoot should’ve been.) There’s no mega mansion like the CMB shoot. There are no luxury cars. Just Cam’ron, The Diplomats, and their kinship with the culture.

“At the end of the day, I feel like I have a style that makes people connect with my images on a street level,” Johnson concludes.

“I think that’s why a lot of my photos get copied and a lot of kids are like, ‘Oh, that’s my favorite photo of this artist.’ Of course labels wouldn’t think the public would notice if something is fake or retouched. Sure enough, they did and got turned off to it. I was always about it. Even now I think it’s about creating something that people can relate to. That’s why I think it’s super important for me to shoot them in those real environments. That never goes out of style.”