Review: Wiz Khalifa & Taylor Gang Are In It To Win It With "TGOD Volume 1" 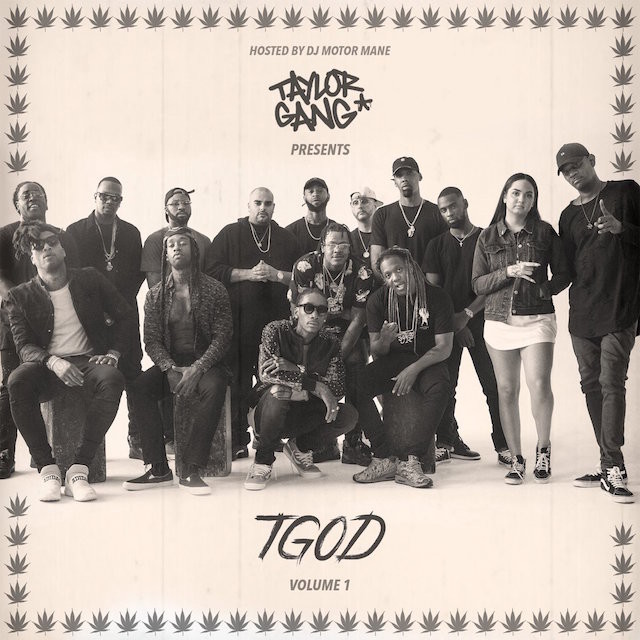 It’s easy to get entangled in rap’s web of conglomerates consisting of Lil Wayne’s Young Money, Rick Ross’s Maybach Music Group, or Kanye West’s GOOD Music imprint. With a bevy of Hip Hop powerhouses fighting to accelerate up the proverbial totem pole of music, it’s easy to let Wiz Khalifa’s Taylor Gang collective slip through the cracks. Quite honestly, it’s not their faults. Rap is a never-ending blood sport, where groups are fiercely competing for the eyes and ears of fans. Even though Wiz has solidified himself as a highly-touted heavyweight, he still doesn’t receive the same acclaim as a Drake, J. Cole, or Kendrick Lamar.

Though Wiz’s sword of lyricism isn’t as sharp as his contemporaries, his masterful ability to pen infectious tunes places him in a class of his own. In the octagon of Hip Hop, fans often laud those who can strangle their adversaries through aggressive wordplay. For Wiz, his penchant for crafting bangers is what ousted any shades of doubt in his career. That’s why he’s still a huge draw in the ring. The same can be said for Juicy J, who still provides a strong veteran presence for rap and Taylor Gang. You also have the emergence of Ty Dolla $ign, the crooner who can cradle your baby girl to sleep by connecting a couple of high notes. Following the label’s signing with Atlantic Records and soaking up their contributions on TGOD Volume 1, it’s safe to say that this triumvirate can wrestle with any other trio in rap right now.

Wiz and Ty$ exude unflawed chemistry when they tag-team on “Brand New” and “Take it There.” With ISM and Geoffro providing the backdrop for Wiz and Ty to thrive on the former, Taylor Gang’s brightest stars bounce off each other’s flows effortlessly. As for Uncle Juicy, his sex-laden escapades on “Come Through” adds some tasteful contrast to Wiz and Alpac’s slow-burning cut “Can’t Wait.” Like any strong crew, it’s not just Wiz, Ty, and Juicy imbuing some flavor onto this great collection of songs. Taylor Gang’s Raven Felix flexes her lyrical muscle on several occasions, especially on “For More,” where she joins Wiz, Ty, and Tuki Carter. “Quitting’s not an option, what’s a boss to a queen/Nah, more like what’s a queen to a goddess / That’s always been my mind state, got a taste/Now there ain’t no going back to the ways when we was unpaid,” she raps. When given opportunities to shine on their own, several artists rose to the occasion, allowing TGOD Volume 1 to resemble a very cohesive project. Not only did we receive a hungry effort from J.R. Donato on “All Winter” but we also got a rejuvenated Project Pat, who treated his verses on “Freaky Before” and “Feeling Faded” like a demolition derby. While Raven showcased her versatility by rapping and singing in hopes of finding some love on “Good Ma,” Berner lazily scooped up Dr. Dre’s “Nuthin’ But a G Thang” in hopes of making it his own but should have aborted that ambitious mission from the start. The one thing that’s rarely ever disputed about the group’s material as a whole stems from their beat selection. On the production end, TM88, ID Labs, Frank Dukes, Harry Fraud, and Crazy Mike all set the table nicely for Taylor Gang to feast on their scorching hot beats.

What’s admirable about this tape is the fact that the role players like Chevy Woods — who chef’s up a hellacious verse on “History,” Tuki Carter, and Raven aren’t drowned out by their star teammates. Wiz allows his artists to utilize their platform to the fullest and thrive. When he deems it necessary to join in on their mischief, he does so with gusto, while also allowing them to orchestrate the show. Despite shooting for the moon and dropping 23 records in an era where people’s attention spans are absolutely abysmal, his decision to mesh his young players with his veteran stars proves to be a wise move. Unlike several marquee artists who dabble in doing group projects, Wiz isn’t all about getting his — he makes sure all of his artists get enough shots to score and create a stir on their own.