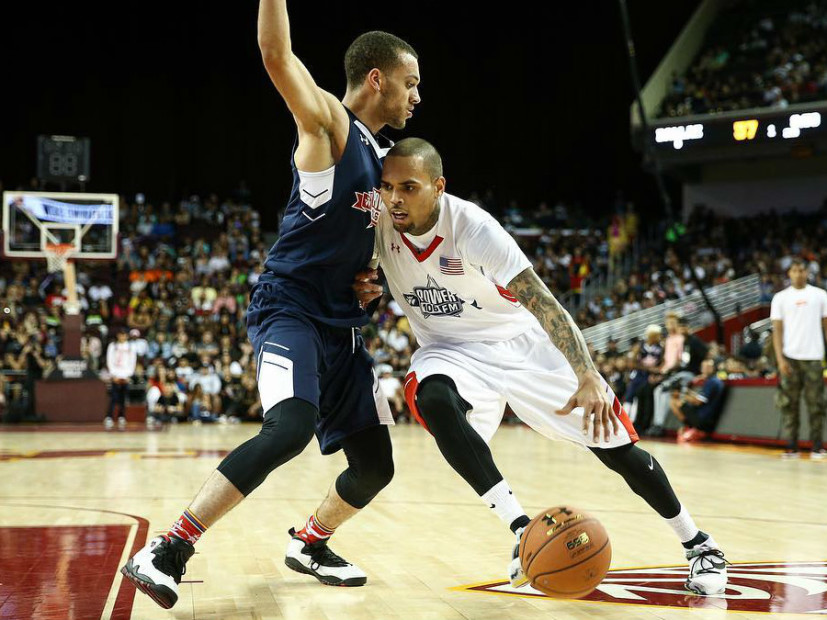 Chris Brown seemingly joined the growing number of those supporting Colin Kaepernick’s protest of the National Anthem at Power 106’s All-Star Celebrity Game yesterday on the anniversary of 9/11.

In footage shared by TMZ, Tank addresses the recent controversy around the National Anthem to the crowd at USC’s Galen Center and asks the fans to join him in honoring the lives of those lost in the terrorist attacks 15 years ago. Breezy stays seated while Tank sings “The Star Spangled Banner,” but wasn’t the only one as some of his teammates sat beside him in front of the scorer’s table. Despite his decision not to stand, the Royalty singer nods along with the tune.

Breezy took to Instagram after the game to address the accusations with a series of posts to seemingly deny protesting the National Anthem. One featured a screenshot of the TMZ story with the caption “Stay classy!” and another one showed a picture of himself at the game bending backward with the explanation “Dodging this bullshit like.”

Brown has had numerous issues with the celebrity news site, including blasting them for a story about his appearance at a gay pride parade and a report that he stomped on a fan.

Watch TMZ’s footage of Chris Brown sitting during the National Anthem and see his Instagram posts below.

Additional footage has emerged via TMZ of Chris Brown at the Power 106 All-Star Celebrity Basketball game. In this video, he is confronting someone in the stands. It gets so heated that he stands on the bench to lean into the person he’s debating with. It is hard to discern what Breezy is saying over the loud music. The cops get involved and try to calm the situation. Brown walks away before anything gets physical.

“I don’t care who’s here. Get it straight,” one officer says, implying that Brown had a problem with someone being in attendance at the game.