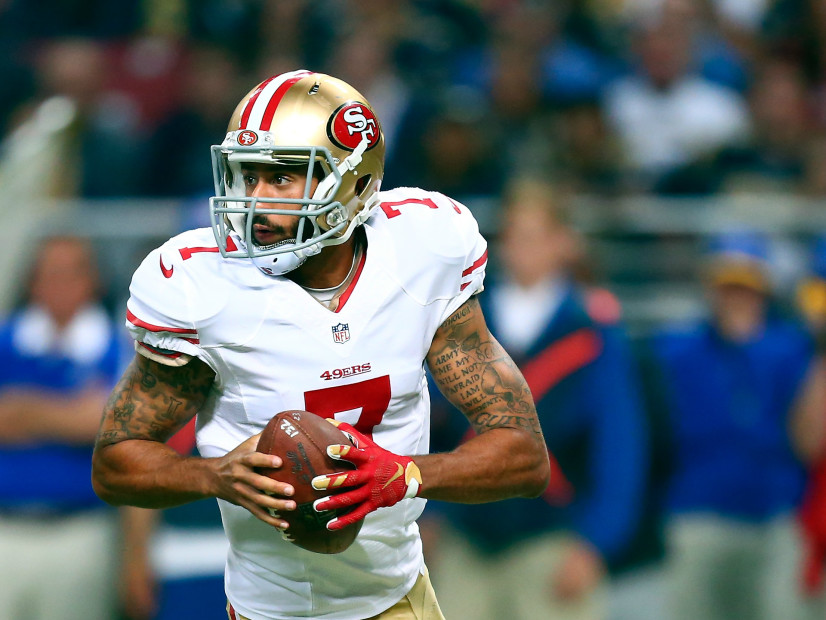 Colin Kaepernick used his platform to raise awareness for social injustice in the United States by protesting the national anthem in the San Francisco 49ers preseason matchup against the Green Bay Packers yesterday.

The quarterback sat while “Star Spangled Banner” played before kickoff. He explained his statement of protest to the NFL after the game.

“I am not going to stand up to show pride in a flag for a country that oppresses black people and people of color,” he said. “To me, this is bigger than football and it would be selfish on my part to look the other way. There are bodies in the street and people getting paid leave and getting away with murder.”

You can see Kaepernick seated on the bench at the bottom of this photo from sports reporter Jennifer Chan.

This team formation for the National Anthem is not Jeff Fisher approved. #HardKnocks pic.twitter.com/SqHHdw0aoj

The San Francisco 49ers released a statement about their star player’s actions, saying he has the right to express his beliefs according to the American Constitution.

“The national anthem is and always will be a special part of the pre-game ceremony,” the team says. “It is an opportunity to honor our country and reflect on the great liberties we are afforded as its citizens. In respecting such American principles as freedom of religion and freedom of expression, we recognize the right of an individual to choose and participate, or not, in our celebration of the national anthem.”

The NFL shared a similar sentiment.

“Players are encouraged but not required to stand during the playing of the national anthem,” the league said in its own statement.

This comes after Carmelo Anthony took to Instagram to spur on his fellow athletes to take a stand against injustices in the wake of recent shootings by police, the presidential race and other strifes in the country.

Many in Hip Hop voiced their support for Kaepernick, including OG Maco, Ne-Yo and Daye Jack. Bas thanked Kaepernick and Anthony for their leadership in the sports community and Dreamvile’s president Ibrahim Hamad also showed his solidarity.

Check out all the reactions to Colin Kaepernick’s protest of the National Anthem below.

@Kaepernick7 thank you for sitting down and standing up for our rights as human beings.

That is the true essence of a leader.

Much respect for @Kaepernick7 @carmeloanthony and the athletes that won’t be silenced for the sake of endorsements. We need you.

Don't be mad at Colin Kaepernick. Be mad at the conditions that forced him to protest. #BlackLivesMatter

. @Kaepernick7 is my friend and brother. I fully support what he did last night. He was both bold and right to not stand for the anthem.

There's nothing more to say about #ColinKaepernick's protest after these two statements pic.twitter.com/4fTlllXVNx