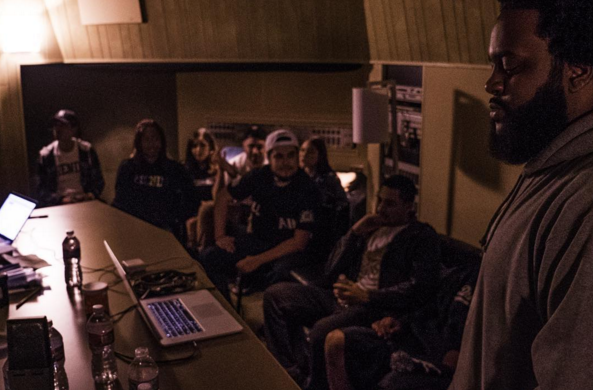 Bas Confused Methylone For Molly & Inspired "Too High To Riot"

Los Angeles, CA – Rappers making music inspired by drug use is certainly nothing new but Dreamville recording star Bas may have just accidentally made the best music of his career. And he can thank/blame an uneducated drug dealer.

Following the release of his debut studio album, Last Winter, the articulate rhymer born Abbas Hamad began globetrotting across the planet in search of some life experience and unnaturally, drug usage became an influence to those travels. Unbeknownst to the Bas and his crew, the molly a.k.a. MDMA they thought they were carelessly blitzing their brains with turned out to be methylone a.k.a. MDMC; an alternative designer drug that commonly circulates around the streets.

The impromptu research prompted Bas to ditch the experimentation but it took his experience and framed them into a bigger picture.

“I feel like a lot of times, the drugs are used as a perspective to [highlight] what I’m really doing in life. It’s almost sobering in itself,” Bas tells HipHopDX at Record Plant Recording Studios during the listening session for Too High to Riot, his sophomore studio album.

“[The album] is darker but no so much in a sad way but more of a reflective way. Being honest and finding more ways to express that was the most enjoyable part of making this album”

Too High to Riot is indeed a rumination of Bas’ tripped-out state of mind the past year and some change since the release of his last album have altered his thinking. But there is no lack of clarity; the lyrical fodder is crystal-clear, even. It packs the same impressive wordplay and song structure (guided by in-house maestro Ron Gilmore, among others) that propelled J. Cole to make the Queens native the flagship artist for his label.

Said live travels also thrusted Bas overseas to the East London region where an encounter with the electronica band The Hics helped shape the album up for the better. Although they may be unfamiliar in most Hip Hop circles, the five-man group have made a name for themselves within their respective niche and ended up carving out two records on “Too High to Riot” with “Matches” and “Ricochet.”

While the project’s intoxicating subject matter is made apparent through the revealing contents and airy production, the title becomes rather tongue-in-cheek when the album’s anchor track in “Black Owned Business” is introduced. Bas says he penned the song after being surrounded by supporters in Ferguson who were all greatly affected by the sins of Officer Darren Wilson.

“We all went out to Ferguson last year, like the whole squad,” Bas recalls, harkening on how the Mike Brown case (and its aftermath following the not guilty Darren Wilson verdict) shook the entire country to its core. “Cole just hit us up like, ‘Whoever wants to go, I got you; flights, hotels and everything’ and instantly, I was like, ‘Hell yeah, let’s do it.'”

However, initial cynicism preceded the trip’s meaning for Bas who admits he didn’t see the vision until he arrived and interacted with the people.

“I’m kind of new at this shit,” Bas explained on his role as a influencer to the culture. “Yeah, I get it. We got a voice but I’m becoming more aware how our voice is growing. Going [down there] changed my perspective on what we could do. It’s easier to sit back and be a cynic but we really speak to people–and they connect to it.”

In other words, there are more than one ways to spark a riot.

Too High to Riot releases on iTunes tomorrow, March 4 courtesy of Interscope/Dreamville Records.