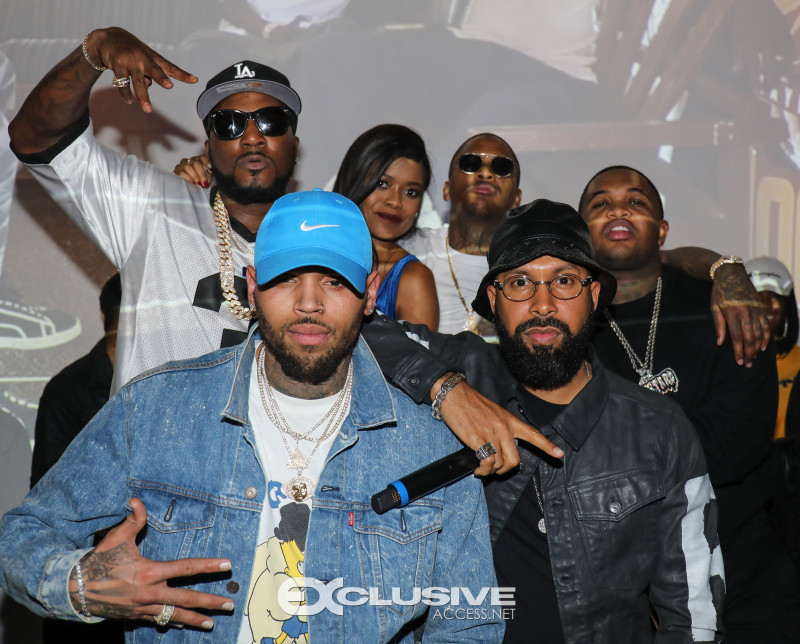 I make venues do this now

Lil Dicky is the truth. This was the scene from his sold-out Los Angeles show at The Wiltern for his Dick or Treat Tour. For starters, what an epic name for a tour. If he wasn’t rapping, he would absolutely kill it as a comedian. This guy is comedy.

This was just the beginning. I have to say, this was an extremely entertaining show. The Halloween-themed stage was perfect. Lil Dicky runs out in a nun costume, which came off real quick, revealing a clown suit. Before he graced the stage, the crowd was screaming all names: LD Lil Dicky, Dave, I’m catching on.

He said he would bring out special guests tonight: dead or alive. The dead comprised of Tupac and Biggie in cartoon form on the projector. (Yes, they conversed.) The living consisted of Madeintyo and Trinidad James. Everybody in the building was “SKRT SKRT”-ing for “Uber Everywhere,” and James brought all the energy as they performed “Just A Lil Thick” featuring Mystikal.

“Pillow Talking” was the song that had me the most lit. Funny story. We were backstage and I saw the scariest clown of my life chilling on the couch. I couldn’t stop staring. Next thing you know, he’s on stage juggling. There was a good percentage of the audience dressed in costumes tonight, so I thought he was just playing the part.

i seriously get so mad when artists throw water at me at a show ? @lildickytweets

I hate when artists get water bottles and spray everyone in the crowd and of course, that happened. Later, he actually threw out candy, which was fitting for the Dick or Treat Tour. And then he threw a caesar salad, a veggie tray, and EGGS. Real eggs.

Throughout the night, Lil Dicky proceeded to sing “I Believe I Can Fly” and do the Michael Jackson “Thriller” dance. I had a friend text me asking what I was up to mid-show. I told him where I was and his immediate response was “I have a problem with white rappers.” That took me aback. I totally forgot LD was white.

And then I realized, I don’t see color. I see an extremely talented rapper on stage giving his fans exactly what they wanted. During “Lemme Freak,” of course, he has to bring out a girl on stage. The only requirement was that she had to be over 18. She was such a good sport. She knew all the words to the track.

He proceeded to give her a lap dance. Then he took off his pants . . . and freaked her again with nothing but boxer briefs. He finished the show with his junk hanging out for the world to stare out. “$ave Dat Money” hit the spot as always. We love you, Dave.

It’s Gucci! Burrrrrr. I was saying these ad-libs ALL day. The moment I saw Gucci Mane on the Beach Goth lineup, it was a wrap. I knew it was going to be a mission, but I mentally had to push through it. This festival took place at the OC Observatory, which is an hour drive from Los Angeles. (My thoughts: “Please God, let there be no traffic!!!”).

Gucci is one of the few artists I haven’t seen live. This may have something to do with him being locked up for what seemed like forever (in reality, only two years). I feel like out of all the rappers that get locked up and earn the #Free [insert rapper’s name] hashtag, #FreeGucci was the realist. I just remember the day he was released, it was the biggest celebration, for everybody.

His set time was at 2:55pm, and he literally walks out at 2:55pm, casual as ever. No hype man, no buildup, just walks out on stage like he’s Gucci Mane. Being in front of him was surreal. That’s how I would describe his set. Surreal.

Out of all the shows I’ve covered, this was the most crowded photo pit I’ve ever been in. How many photographers does it take to shoot Gucci Mane? I’d like to take a second to praise the iPhone 7. Ever since I upgraded, I’ve been getting compliments on my pictures and videos. For example, footage of ScHoolboy Q bringing out Kendrick Lamar on his Black Face Tour.

I literally drove 2.5 hours for 30 minutes of Gucci. Was it worth it? Absolutely. Hearing “Lemonade” and “Wasted” live had me smiling ear to ear. In my yoga class later that night (thank God for Core Power Yoga), the instructor had “Last Time” by Gucci Mane and Travis Scott on the playlist. I was ecstatic. How’d she know?

Agenda for the evening: Lou Williams’ (of the Los Angeles Lakers) 30th birthday affair at The Vault at the Reserve in Downtown Los Angeles. Theme: The Great Gatsby. This venue was absolutely gorgeous and perfect for this event. Shout out to Erica, his publicist, for putting this together.

The actual venue is actually underground and I believe it used to be a bank (hence, The Vault). Shout out to them for that free Wi-Fi, they definitely know how to keep their customers happy. In fact, this is inspiring me to write a Yelp review. The walls were so dope: literally made up entirely of all the little drawers you see inside a bank vault, where robbers like to steal their cash flow from. There was also an actual vault door that many took turns posing in front of.

All the ladies were so extravagant, decked out in Great Gatsby attire. It was like a scene out of a movie. If you need a better idea, here’s Karen Civil playing the part. We weren’t sure if media was supposed to dress up, so I threw on black on black with some Jeffrey Campbell Black Lita Spikes — can’t go wrong there. There was also a photo booth with fun props that printed out the pictures right then and there. That was definitely a hot item tonight.

The star of the night: Lou Williams.

Lou Williams pulled up around midnight. He had his gorgeous girl beside him, along with his family and squad. When I say squad, I mean there were so many of them, they barely fit into the frame of the camera. It was great.

I was extremely fascinated by this woman, as I’m sure she made it onto the majority of everyone’s Snapchats tonight. Guilty. She literally twirled in glass bowl full of water the entire night. Overall, it was a good time for everybody. Shout out to the DJ, the music was on point. Meek Mill “House Party” vibes.

I remember seeing posts from Jeezy’s Trap Or Die 3 listening party in New York, and in my head I’m thinking, “When you coming through LA?” Tonight. This took place at Sirens Studios in Hollywood, CA. This was the definition of lit: free drank, dope music, the who’s who in music, and complimentary valet parking. The latter was my personal favorite.

Another reason I knew it was lit: the owner of DX, Tommy, was out tonight. He’s rarely in the streets because, well, business first. I told him I was proud.

First of all, if you don’t fuck with Jeezy, I question our friendship. He’s the OG. He actually came through DX earlier today for an interview, shout out to Trent. Before Jeezy came out to play us his new shit, the DJ dropped all his classics. Tracks like “R.I.P. (Remix)” had everybody turnt. It was just a reminder that the Snowman is back.

.@DuneyKUSH passed me the blunt at the @Jeezy #td3 listening party and i'm lit lmao ?

And while everyone was sipping their liquor in foam cups with the Snowman logo, the homie Duney Kush came through with a bleezy. Thank goodness. From that point on, I was on everyone else’s level.

My friend had me dying. He goes, “I think Chris Brown has finally smoked enough blunts to the point where he might be high.” This was too real. CB was literally chiefin’ all night. Shout out to Cozz, YG, Kamaiyah, DJ Mustard, Doug E. Fresh, Karen Civil, Kenny Burns, Popular Demand, Roc Nation, Money Making Matt, EB Wright, DJ Nina-9 and more coming through to support. Trap Or Die 3, whether it’s a mixtape or album (we’ll never know), is about to be so lit. It’s #SnowSeason.