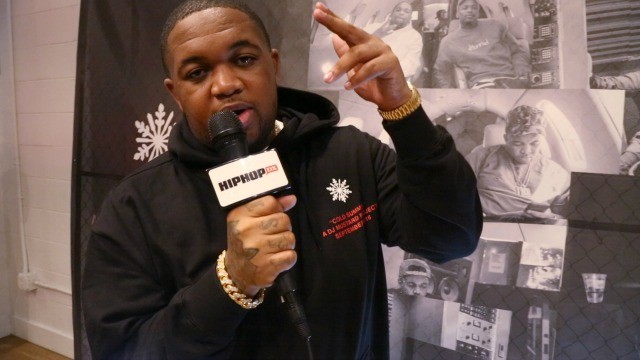 Los Angeles, CA – Anytime there’s Mustard on the beat, hoe, you can expect a lot of A-1 talent. With no real hints at a new project, DJ Mustard recently took to Instagram to surprise drop the tracklist to Cold Summer, which is “more ratchet than his usual.” While this is the follow-up to his 10 Summers album back in 2014, he makes it known that things were a little different this time around.

I'm playing the whole album at the pop up shop today @wildstylela pull up !!!!

On Friday, September 9, HipHopDX caught up with DJ Mustard at Wildstyle, an eclectic high-end concept store (owned by Joyrich) he shops at on a weekly basis. The fashion boutique is located on Melrose in West Hollywood, CA, which also served as home to his Cold Summer fashion line for the weekend.

Prior to the interview, we spoke with Meko, a trusty member of Mustard’s management team, and asked whether this project was a mixtape or album. All we got was a shrug. It seems the lines are blurred intentionally.

However, one thing is certain, the Roc Nation star beatsmith has been putting in work, putting together this new project after finally returning home from opening for Rihanna on her Anti World Tour. After spending a month and a half with Badgalriri, Mustard confidently labels her as his “big sister.”

When asked about the craziest thing that happened to him on tour, he replied, “I missed my first flight to the first tour date to Amsterdam, and I lost all the money. We had to rebook them it was like $14,000 dollars a flight.”

How does such a thing happen you may ask?

“We stopped and got chicken in Louisiana. It really happened, real shit,” he said.

When asked who he would like to work with, a confident Mustard reveals a collab with Beyonce and Jay Z is very possible.

The Cold Summer pop-up shop was held for three days over the weekend. Fans were able to come check out the collection comprising of three pieces (windbreaker, hoodie, and T-shirt) while hearing the new album play in full. Expect guest appearances from YG, Quavo, Young Thug, John Legend, Meek Mill and Jeezy.

POP UP SHOP FOR COLD SUMMER THIS WEEKEND @wildstylela STARTING THIS FRIDAY …. See you there ? ….