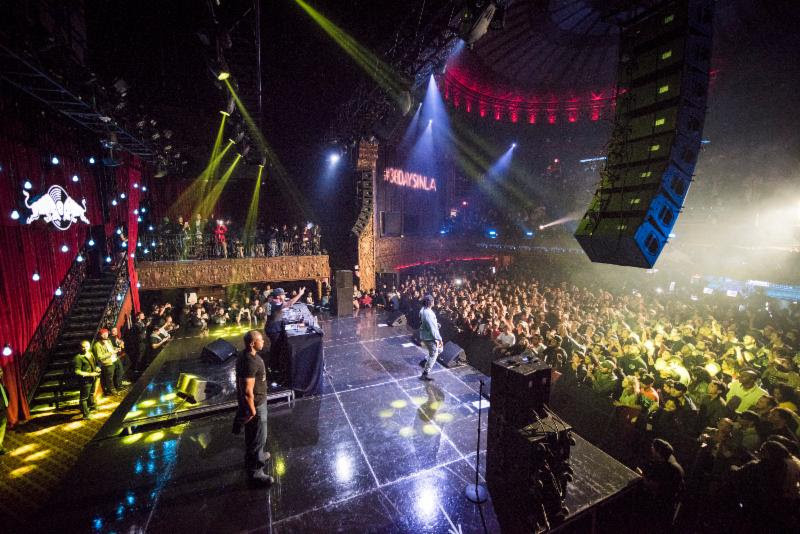 What a perfect night for Rae Sremmurd to celebrate their hit single “Black Beatles” featuring Gucci Mane taking the number one spot on the Billboard 100. This was the Sremmlife 2 Tour featuring Lil Yachty. If you guys know me at all, you know I love these two little dudes. But who doesn’t? Their music gives me life. This was a lit-uation before it even started.

I actually thought it was weird to have Lil Yachty open for them, especially after he just headlined his own tour. But it makes sense. They fit the same level of turnt. I caught Lil Boat at the XXL Freshman show in Hollywood, so I knew to hang back. He loves to throw water at the crowd.“Broccoli,” “1 Night,” and “Minnesota” all hit the spot.

.@RaeSremmurd tonight. please dont mind me as i turn up in my own lil bubble for the evening.

Swae Lee comes out in a yellow jumpsuit, while Slim Jxmmi is surprisingly shirtless (compared to the Gucci pink fur and goggles he wore on The Breakfast Club). They came out to “Start A Party,” one of my favorite songs off Sremmlife 2. Whenever I’m driving and need to get pumped, I play this and it does the trick. The best part is, as many times as I’ve seen them, I never get sick of them. They bring nothing but good, positive energy.

This is one of those shows where everyone in the crowd knows every single song because every song is a hit. Literally. Remember “No Flex Zone”? It all started there. Shout out to Yo Gotti for coming through to play “Down In The DM” and “Law,” and Ty Dolla $ign coming out for “Blase.” Always a movie.

Can we take a second to look at this massive joint Slim has in his hand? That literally came out of nowhere. Hilarious. Soon enough, his Gucci pink fur (that costs $20K) found its way on his back. Another highlight of the night includes a “Free Kodak Black” shout out prior to playing “Real Chill.”

The grand finale. This was the moment the entire venue was waiting for the entire night: the #MannequinChallenge to “Black Beatles,” which even had Paul McCartney participating. You can’t top this. Shout out to Mike WiLL Made-It turning up on stage as well. He’s the reason these guys are where they are today.

HAIM selling out The Fonda Theatre in Hollywood, CA.

Night 15 of Red Bull Sound Select’s #30DaysInLA concert series. This was my first non-Hip Hop show in a minute, and it was a good one. Introducing HAIM, an all-girl indie pop rock band from Los Angeles. These girls are so amazing and I definitely fell in love with them tonight. Not only their music is amazing, but their personalities as well. You could just tell how down to earth they were.

seeing @HAIMtheband perform in their hometown of los angeles rn is so beautiful. ❣️

No better venue to play their hometown show than The Fonda Theatre in Hollywood, CA, sold out to the brim. I remember catching their set at Air + Style, which was major festival vibes. They killed it. All three girls (all sisters) revealed how special tonight was because they grew up attending shows at The Fonda. My homie actually got there when doors opened at 7pm to be in the front row for them. He’s seen the, ten times. If that’s not love, I don’t know what is.

Este, Danielle, and Alana Haim rocking their heart out.

My homegirl noticed we were right behind the girls from Vanderpump Rules. We’re both from the bay so our running joke is #SoLA. She’s a huge fan of the show so I snapped a pic of them. It was adorable. They were definitely HAIM fans, along with every other human being in the venue.

These girls rocked the show. They sing, play guitar, play drums, and probably a million other cool things. “My Song 5” featuring A$AP Ferg was my favorite. Also, a free chocolate chip cookie on the way out? Yes, please.

Next up, Belly’s “InZombia” release event at Adults Only on Sunset Blvd. Man, seeing Belly where he is now from the beginning always makes me feel some type of way. I discovered him when he dropped his “Up For Days” mixtape, home to “Might Not” featuring The Weeknd. I hate to be that person, but I was obsessed with the track before it took over the radios. It still trips me out. It took over a year. . .

The event was super exclusive and. . . Hollywood. When the clock struck midnight, Belly proceeds to make an announcement that it was his manager Saul’s birthday and to follow him outside. He surprises him with a Spyder, with a red bow on the hood. So cute.

#Belly celebrating the release of #Inzombia in #Hollywood tonight ??

Out of all the shows on the Red Bull Sound Select #30DaysInLA series, I was most excited for this one. Pusha T at The Belasco in downtown LA. He’s actually one of my favorite rappers. I was super excited when they announced he was the president of G.O.O.D. Music. My friends had no idea. They still thought it was Kanye. And when I set them straight, they didn’t believe me. Smh.

Pusha T threw it back with some Clipse tracks. Those were the days. We were backstage so I couldn’t see the crowd’s energy, but you know all the day one Pusha fans were lit. Unfortunately, his set was extremely short. He got on around 10:30pm and got off before 11:10pm. We were all very confused. . . and disappointed.

“Drug Dealer’s Anonymous” hit the spot, one of the hottest songs of the year. Real talk, though, when’s King Push supposed to come out? We’re waiting!