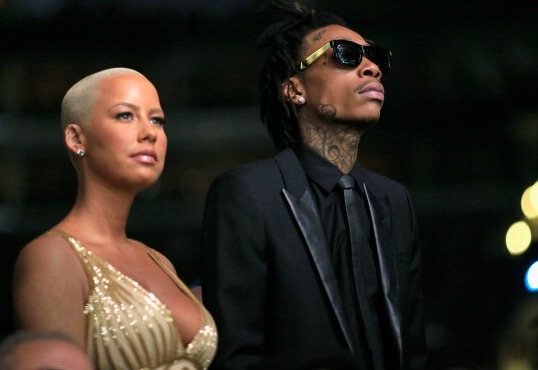 New York City, NY – As much as Wiz Khalifa and Amber Rose’s marriage dissolution was 14kt tabloid fodder, the A-list Hip Hop couple did receive their fair share of love in the news while they were together.

Fans who have been banking on the chance of reconciliation may still have a glimmer of hope to get their wish. That is, should Mr. Taylor Gang purge himself of all the carnal pleasers that come along with being rap royalty.

“I just feel like right now he should go be a hoe for a while and work on his businesses, and then maybe later we can get back,” Rose, 32, told Bethenny Frankel on her new SiriusXM’s B Real With Bethenny show. “If God wants us together, we will be together.”

Rose and the superstar rapper were wed in July 2013 and she filed for divorce — citing irreconcilable differences — in little over a year’s time; atypical of celebrity romance in the public eye. The two share joint custody of their three-year-old son, Sebastian Taylor Thomaz.

But like they say, a couple “who plays together, stays together” and the high-profile pair is keeping it civil in the most unique of ways.

“It’s so crazy that we are literally the best of friends,” she exclaimed. “We hang out all the time. We have full family days with the baby.”

“We just went out to a strip club the other night together — without the baby. Just me and Wiz,” she added. “We just had a great fuckin’ time. We spent like [$30,000] on strippers. It was sick. It was so cool.”

After only two years of dating, Amber and Wiz completed the love, marriage, and baby carriage triangle but seeing that the Taylor Gang CEO’s career is still blossoming, Amber came clean and says they may have moved hastily to the altar.

“I feel like that we just rushed into marriage because we were so deeply in love, and we kind of had a rough patch in our marriage,” she admits. “And because we were married, it kind of, like, brought it to the next level.”

“I feel like if we just stayed in just a boyfriend-girlfriend relationship longer, we could have worked it out and then got married later,” she added.