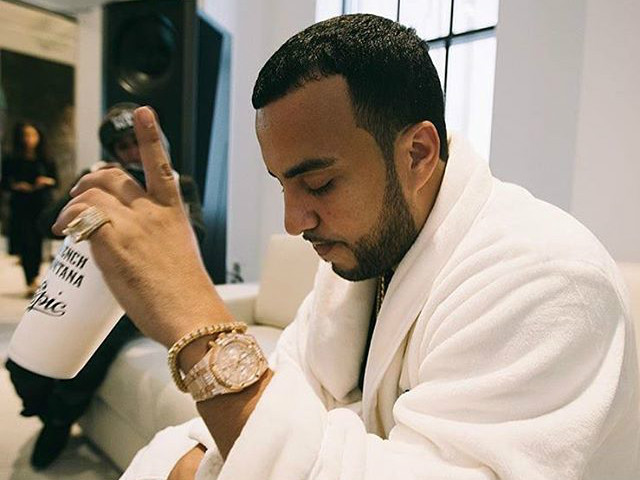 Despite saying that he scrapped MC4 as an album, French Montana has released the project as a mixtape today (November 5).

MC4 is made up of the original 14 tracks that were promised on the album, which actually leaked at Target despite French delaying the August release date due to sample clearances. A$AP Rocky appears on “Said N Done” and the singles “No Shopping” with Drake, “Lockjaw” with Kodak Black and “Figure It Out” with Kanye West and Nas are all on the project. The late Chinx appears alongside Max B on “Paid For” to close out MC4.

Stream French Montana’s MC4 below and keep scrolling for the cover art and tracklist.

French Montana has delayed the release for MC4.

The Coke Boys leader made the announcement on Twitter today (August 16) and did not give a new drop date, but explained that the delay is due to sample clearances.

The album was supposed to be released Friday (August 19) with features from A$AP Rocky, Kanye West, Nas, Max B, Chinx and Drake.

Check out the tweets explaining MC4‘s delay below.

Due to some sample clearances that are still being worked out, I have to move the album release date. – FM #MC4

I want to apologize to my fans that are waiting, I want to make sure the album is something special. – FM #MC4

French Montana has unveiled the tracklist for his long-awaited MC4 album.

The project is made up of 14 songs and includes features from A$AP Rocky, Jeezy, Beanie Sigel, Jadakiss and Styles P. French’s friend Max B is to appear alongside the late Chinx in the closing track, “Chinx & Max/Paid For.”

The Coke Boys leader recently dropped the “No Shopping” single with Drake where the OVO boss seemingly sent jabs at Joe Budden to add fuel to their beef, but French said after the fact that the “Pump It Up” reference was not meant as a diss.

Two cuts from French’s Wave Gods mixtape appear on the tracklist, “Lockjaw” with Kodak Black and “Figure It Out” with Kanye West and Nas.

MC4 is scheduled to drop August 19.

Peep the MC4 tracklist below:

Fresh off the release of his Wave Gods mixtape, French Montana releases the details about his MC4 album, which will be the fourth installment of his Mac and Cheese series.

MC4 is slated for an August 19 release and has 14 songs on the tracklist. The set is hidden except for two songs, “Lockjaw” with Kodak Black and “Figure It Out” with Kanye West and Nas. Both cuts appeared on Wave Gods.

The album will be released through Bad Boy Entertainment and its new venture with Epic Records.

After the release of MC4, the Bronx, New York rapper and Coke Boys founder will be touring on the Bad Boy Family Reunion Tour with Puff Daddy, Lil Kim, Ma$e and The LOX.