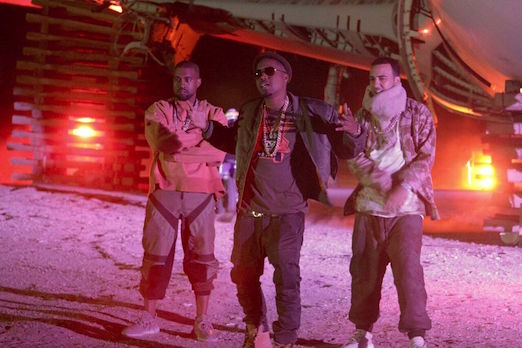 Las Vegas – French Montana is prepping to unveil the most blockbuster track in “Figure it Out” on his recently released mixtape, Wave Gods in visual format.

The Coke Boys CEO was spotted out in the Mojave Desert with the song’s legendary co-stars, Kanye West and Nas for the video shoot yesterday (March 4) while making mention he was surrounded by “real legends” on social media.

The shoot also reunited with his “Bad Bitch” director Eif Rivera (virtually responsible for every 50 Cent/G-Unit video within the past few years) and wrapped up in just a day of shooting. The additional camera time will serve to increase his visibility following his acting debut in CodeBlack Films’ romantic comedy, The Perfect Match on March 11.

“Figure it Out” stood as one the few highlights on Wave Gods (which was also co-hosted by Max B.) but fell short of making an overall impact, only achieving a 2.9 rating with HipHopDX.

Pictures of the video shoot can be seen below.