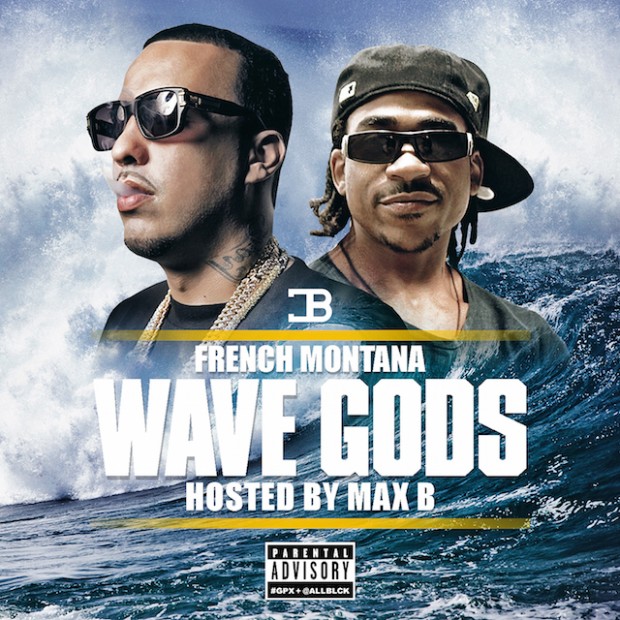 New music should always be welcomed but French Montana is a caricature of Hip Hop troupes on his new mixtape, Wave Gods.

The problem with this approach is that with every style he imitates, the listener is better off going to the primary source. Even the nickname Montana Hendrix, which is shouted out on his latest project, is a rip on Future (who coincidentally appears on the forgettable “Miley Cyrus”) who also got his moniker from the rock legend, Jimi. The hook containing “Let them goons drive the Lambo/ 20 choppers like I’m Rambo,” is unlikely to entice many who aren’t already in French’s corner to go further.

Elsewhere, the sample on the previously released “Sanctuary” is eerily similar to “When We’re Done” off of XV’s Zero Heroes. It also features a rare moment on the tape where French actually raps with some level of emotion and leaves behind the quintessential lines for lyrics worth hearing, On the following track, “Figure It Out” another regurgitation of a sample XV had used on Zero Heroes makes it seem less like coincidence and more like stealing. It isn’t hard to fathom a universe where French and his producers get credit for the work that XV’s team did because of the greater name recognition.

The aforementioned “Figure It Out” also is sure to draw eyes with the features, Kanye West on the hook and Nas unsurprisingly setting the verse bar for the whole mixtape with rhymes: “Hearing people whisper, screaming I’m lucky but trust me/ Nothing come free, shawty tried to keep my son from me/ Or I could be delirious to take life serious/ Remain single forever, can’t wife nothing, period.”

Production throughout is technically sound, including contributions from Harry Fraud and 88-Keys, but doesn’t explore or push the envelope enough the way music by artists garnering attention are making their music. The beats aren’t cheap sounding but rarely use different instrumentation and at a certain point are all rather similar. French does his own impression of southern lean rap on the London on the Track-produced “Groupie Love,” followed by a skit finding Max B, whose role on the mixtape is never particularly clear aside from a cover model and interlude regular. The incarcerated Harlem hero has been in the news thanks to being the center subject of the now infamous Kanye West/Wiz Khalifa spat (he even made the final cut for The Life of Pablo).

Simply put, Wave Gods is not worthy of much attention. The production doesn’t draw you in but well-placed cameos from Travis Scott on “Man of My City” (which sounds more like a French feature on a Travis track), Jadakiss and Puff Daddy on “Old Man Wildin,” Kodak Black on “Lock Jaw,” and the late Chinx and A$AP Rocky “Off The Rip (Remix)” are what truly hold the project together. On the tape’s opener, French talks about street rap selling like Kendrick Lamar. He should be wary of those comparisons as Kendrick is just days removed from an epic Grammy performance. French Montana may want to leave behind the sales talk and focus on improving his product.