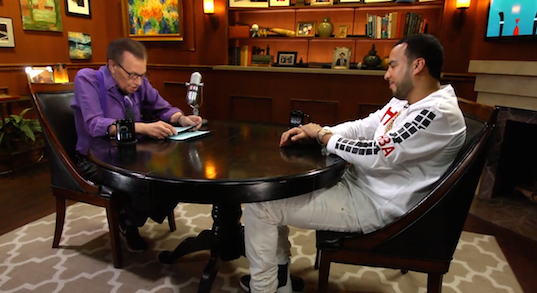 French Montana Tells Larry King How Max B. Made "The Life of Pablo"

French Montana is the latest rapper to take the veteran personality’s hot seat for what is the first Q&A session of a partnership between OraTV and HipHopDX. The Coke Boys’ head honcho comes on the heels of the Kanye West/Max B. Life of Pablo blitzkrieg as well as his own release with his incarcerated mentor.

When asked about the stir Kanye West caused when he announced that he was calling his album Waves (another adjustment from So Help Me God and SWISH), French broke down Max B’s importance to the game, even as his prison sentence drags on.

“A friend of mine–his name is Max B.–he’s incarcerated right now, doing 75 years. And “waves” was his thing. That’s how everyone knew him. His [nickname] was Silver Surfer. So a lot of people that followed the movement kind of took offense to that because it looked like he just took his whole style,” Montana explained before assuring that Kanye was naive to Max B.’s entire existence.

The 58th GRAMMY Awards took place at the beginning of the month and while rap’s chosen son, Kendrick Lamar, had a bang-up night by taking home five awards where four of them were for his critically acclaimed album, To Pimp a Butterfly. However, he fell short of winning the evening’s most coveted honor in Album of the Year, which was bestowed onto Taylor Swift’s 1989, who made history that night by becoming the first female artist to win the award twice. While the ubiquitous superstar’s record sales and fanbase speak volumes, many felt the amount of universal recognition Lamar’s album garnered made it more than deserving to win the award.

Given the amount of influence French Montana has transcended in his still burgeoning career, we asked what would it take for Hip Hop to start being recognized as the undeniable pop force that it truly is. This includes getting rappers their own set on mega stages such as the Super Bowl and the NBA All-Star halftime, where the latter recently set Twitter on fire after iconic rocker Sting was asked to perform in favor of Drake. In Toronto.

“Artists just have to get more creative, probably I would have to say that,” French pondered before squaring responsibility on the powers that be saying, “somebody will have to take rap to another level; someone who is from the upper level from the GRAMMYs. I just feel like they focus more on country music.”