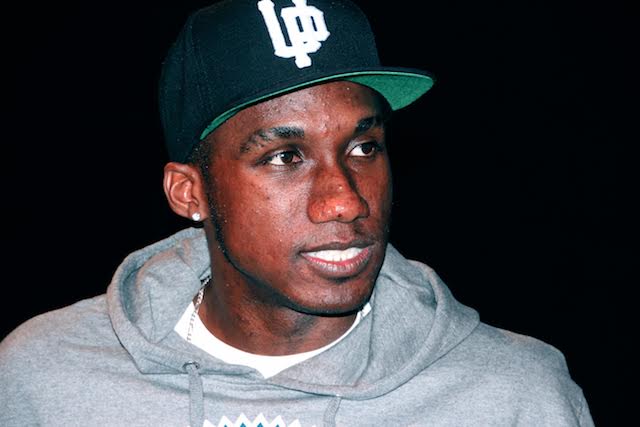 Funk Volume is dead. This according to Hopsin, who has officially left the label he co-founded and has now signed himself to his Undercover Prodigy company.

The Panorama City, California rapper addresses the rift with Funk Volume co-founder Damien Ritter in the self-produced “ILL Mind of Hopsin 8,” which he released today (March 8). He previewed the music video for a group of fans at Secret Rose Theatre in North Hollywood, California yesterday (March 7). Hopsin says that he has now found a sense of freedom.

“It feels great, great feeling,” Hopsin says in an exclusive interview with HipHopDX about releasing the track. “Been waiting to get it off my chest for two months now. I didn’t want to resort to that, but the way things are going with the whole Funk Volume situation, it’s kinda rubbing me the wrong way, so I had to be vocal about it. That’s since I was a child, that’s been my way of venting so I just had to do what I do best and be vocal.”

In “ILL Mind of Hopsin 8,” Hopsin uses the backdrop of a courtroom scene to blast Ritter with multiple shots. He says that Ritter was “biting the hand that was feeding you” and his multiple roles of manager, label owner and accountant are “tricky.” He makes claims that his former business partner has gambling problems and bashed Funk Volume Fitness. He also compares Ritter to Tomica Woods-Wright, who Hopsin had grievances with while he worked with Ruthless Records prior to founding Funk Volume, and a “new age Jerry Heller,” referencing N.W.A’s manager. Someone in the crowd at the screening suggested that Hopsin is the new Ice Cube, who left N.W.A in the early 1990s claiming that Heller did not compensate him properly.

Hopsin founded Funk Volume with Ritter in 2009 and signed himself, Jarren Benton, Dizzy Wright, DJ Hoppa and SwizZz. Hopsin says that the only person he still talks to regularly is Benton and admits that communicating with SwizZz, who is Ritter’s younger brother, is difficult.

Ritter was responsible for getting the independent label a distribution deal with Warner Bros., which Hopsin says he did not agree with and calls “shitty” in the song. The deal started in 2015 and Hopsin’s Pound Syndrome was released in July under the contract. He says that after all the years of working together, the tension between him and Ritter was not a drawn out ordeal.

“It was boiling for about I guess like a month and a half, two months prior to the actual breakup,” he says. “But it wasn’t like years or nothing like that, just a couple months or so.”

Hopsin first publicly announced his issues with Ritter on social media in January. He says that at the time, his use of the platform was to let Ritter know that he was officially leaving.

He hopes that he can bring the other artists along with him to Undercover Prodigy, but Ritter still has power over the other artists. Ritter even has some of Hopsin’s music under lock and key.

“To be honest, it’s a better situation for me,” Hopsin says. “I wish the other guys, I hope they come back to my side so we can work things out ‘cause I would love to create a whole new platform and us all rise together like we were doing, but Damien might get in the way of that.”

Wright told HipHopDX in February that the fallout between Ritter and Hopsin seemed like a miscommunication. Hopsin strongly denies that.

Hopsin feels like he got the best end of the deal. He feels confident that he can turn Undercover Prodigy into an equally successful company that Funk Volume was.

“There’s not really a loss on my side because I have the juice,” Hopsin says. “I was, I started Funk Volume. I built it. I can build another one. It’s not a problem to me.”

He told the crowd that he is currently working with King Los and would be open to collaborating with Ty Dolla $ign.

“I will say that I’ve made more connections in the past two months than I made within the whole time being on Funk Volume,” he says. “Ever since Funk Volume ended, I’ve been making really, really good connections.”

Through the whole situation, Hopsin says that he has learned some lessons and is looking forward to moving on with Undercover Prodigy. He says he is not planning on releasing an album in 2016, but will keep making music and release singles.

“I’m not gonna do business anymore with people who are not of the Hip Hop culture,” he says. “That was my mistake in the past. I’m looking forward to a bright future. I’ve got a lot of things planned that are gonna happen.”