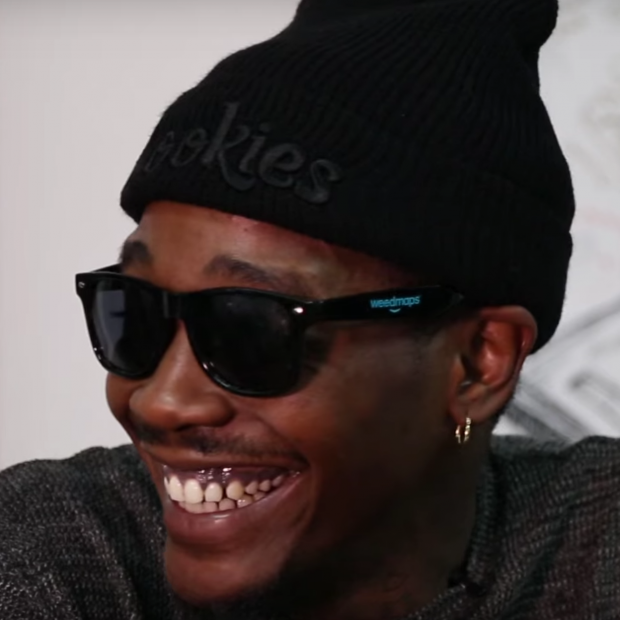 2016 did not begin as anticipated for Funk Volume. On January 2, label founder, Hopsin publicly disparaged co-CEO, Damien Ritter on multiple social media channels. “Fuck Damien Ritter,” he wrote on Twitter. “This man is the death of funk volume.”

“I’ve been having issues with my business partner Damien Ritter,” Hopsin elaborated on Instagram. “We started this whole FV shit years ago, but this man has all the sudden built up the courage to disrespect me and tell me I don’t work hard when I’ve made him Extremely wealthy over the years from my music. At this point, if he doesn’t leave funk volume, then I will.”

By mid-month, the Funk Volume name and brand that millions of fans have come to revere essentially dissolved. FV’s deal with Warner Music is on ice. Hopsin, SwizZz, Jarren Benton, DJ Hoppa and crew are still moving, only in separate directions.

“I just put up a new site today: WisdomAndGoodVibes.com,” Dizzy Wright shares in this exclusive conversation with HipHopDX on the Funk Volume fallout. The Las Vegas emcee’s resolute optimism sounds tested for the first time in recent memory. The previous three weeks of internal strife and public turmoil have clearly been challenging, but also inspiring. His new video, “Plotting” is currently available and his next project, Wisdom & Good Vibes is slated for release this Friday (February 5)—both of which were completed within the past two weeks. He’s also ready to embark on a 44-city tour with Logic. But before hitting the road, Dizzy Wright clears the air.

“I’m just getting ready for my next move. With a lot of shit that I’ve been through in the last few weeks, I feel like we got a lot of attention on us—good and bad. While I got them watching, I just wanna let them know what I was on. I usually like to leave it to the music so I just put it in the music and let them know I was ‘Plotting,’ getting ready for the next move. The song was made [within the past two weeks]. Damn near the whole project was made within the last two weeks. I had the band come in. My boy Reezy in Vegas. When I realized I could bring the band into the studio, it kind of changed everything.

“Funk Volume is not moving. Funk Volume is stagnant. I don’t know what’s going to happen with the name, how everything is going to move forward in that way. Everybody is still moving but in their own directions now. I would say everything was like a fucking cut that just got worse, that had a Band-Aid on it and was supposed to heal. And then some kind of way it just got worse. Maybe we scraped that cut across something and didn’t realize it and next thing you know you’re gushing blood. It was out of my control, though. Everything happens for a reason. I think people were just unhappy. By ‘people’ I mean Hopsin. Hopsin was just unhappy. I think it was miscommunication. There were some things that were said that was kind of blew out of proportion because it came from a different place and it was taken different than that place that it came from. I think that was the tipping point: Not being able to talk about it. That’s kind of the saddest thing about it for me. I feel like we, Funk Volume worked hard enough to be able to talk to each other and solve our problems. Somewhere along the line we weren’t able to do that. Because of that it had to end the way it did.

“Warner is in the position of renegotiating with everybody. It just depends. I’m not sure what Hopsin wants. I’m not sure what Jarren Benton wants. Right now, I’m not sure what I want. I just know what’s in front of me right now and I need to take advantage of that and focus on that and then figure it out from there. I have some direction of what I want to do next. When Jarren was playing on [social media], I didn’t like it. I don’t usually care when Jarren play. I know Jarren just be playing trying to turn it into what it is, but I didn’t like it because I didn’t like how Hopsin went to social media so quick. I felt like we shouldn’t have involved all of y’all. Y’all shouldn’t have known nothing. That wasn’t y’all’s business, the fan’s business. Once you make somebody think they know a little bit, they act like they know everything. That’s what we did. Now we look like we play too many games. Now it looks like a big game. That’s when I was kind of like, ‘This is my life, bro.’ This is how I feed my children. This is how I take care of my family. I take what I’m doing very serious and I need this shit to work because I don’t plan on going to get a regular job. If I have to, I will, but I don’t want to. This shit needs to work. I need to always keep that positive force around me. I feel like it was slowly slipping away from me. At that time, everything was all over the place. Jarren was playing at the wrong damn moment because then the fans were like ‘This is a joke! This is a troll!’ Now they’re harassing us. Now they want answers. We didn’t have the answers yet. They put the pressure on and from there everything trickled down.

“We weren’t fully happy with the outcome with Warner, but there was a lot of things that we needed to understand about making moves in that mainstream light. We were so used to doing things operating our way, dropping it our way. We’re quick. Everybody know me to drop music and projects [consistently]. I can do that because Dame makes it happen. With Warner, they were a little slower. It took some time to get used to it. They wanted things turned in a little earlier for better turnaround. That took some getting used to. Then if the turnaround wasn’t what you expected, everything started sounding like an excuse. That took some getting used to. Building a relationship with somebody that was not part of the relationship at all was a growing process. At the end of the day, I was happy. I felt like we planted the right seeds. I felt like I didn’t get fully the opportunities that I thought I deserved, but it didn’t stop me from trying to strive to get them. That’s the only thing I wanted was to make sure that we were on the same page. It was communication. I don’t think Jarren and Hop would say they felt the same way. I know Hop expressed some frustration. We all had frustrations. Warner just wanted to make sure we were doing everything for us and just keeping in mind that when we came into the relationship, they were under the impression we were still going to go as hard as possible for Funk Volume at all costs, under all circumstances and they would piggyback off that. There were times where I felt we weren’t doing all that we could for the squad, personally ourselves. There were some internal issues that were matching the getting used to [Warner Music]. It wasn’t nothing that couldn’t have been fixed or worked out.

“Hopsin and I are good. I have a different relationship with everybody on the label. I just keep it real with everybody in a different kind of way. Me and Hopsin don’t have any problems. He doesn’t have problems talking to me. He has problems talking to Dame. We on good terms. He’s still showing love. We’re still talking and it’s all love. It’s probably going to be all love because I didn’t have no problems with him. I just didn’t want shit to go down the way it went down. I just didn’t want to start my year like that. When we were on the Funk Volume 2015 tour, we talked about what we wanted to do this year and the energy that we wanted to put into Funk Volume. Some of the momentum was dying down because we weren’t going hard for our squad. We couldn’t let what other people do distract from what we got going on and I feel like that started happening a little bit. From there, we talked about wanting to do more shit, bigger shit in 2016. To start the year like that was frustrating for me. I can’t weep over it. I can’t be trying to fix some shit that niggas don’t believe in anymore. I gotta fucking focus on what I’ve always focused on and that’s Dizzy Wright and the positive energy and the positive force that I want to be in the world.

“We had our last Funk Volume meeting probably ever. SwizZz was on that conversation. I don’t wanna speak for SwizZz, man. SwizZz has told me a lot of good things recently about some of his moves that he’s about to make. It kind of sucks. To some of these Funk Volume fans that have been around from the jump, they’re like, ‘It’s not Funk Volume without SwizZz.’ I respect that because I feel the same way. I tell SwizZz, I tell everybody that. Not having SwizZz around played a part in why we couldn’t fix the situation. It’s not his fault that it happened but him not being around plays a part in why we couldn’t fix it because there wasn’t that extra voice that we needed and he doesn’t feel like he has that voice because he hasn’t held the squad down the way he feels like he was supposed to. He has a close relationship with everybody, but that’s Dame’s brother. SwizZz gonna feel the way that he feel. I feel like he was trying to fix the shit.”