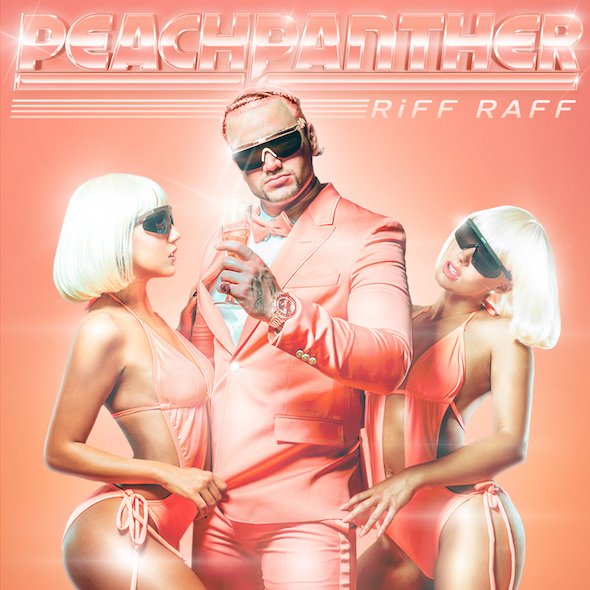 Houston rap spectacle RiFF RAFF has amassed a cult following over the years with his syrupy flow, and bigger than life high roller lifestyle. His fans literally risk death for a chance to jump on stage just to touch the hem of his shirt. However unexplainable the fanfare he has garnered is, RiFF RAFF continues to capitalize on it with his latest album, Peach Panther.

To the uninitiated and sober, RiFF RAFF is unadulterated static. Listening to his music is about as productive as tying string to cups and trying to make a long distance call to your childhood imaginary friend. His nonsensical simplicity is often insulting to a genre of music that was built on wordplay, metaphors, storytelling, and substance. For the record: Peach Panther offers none of those qualities.

RiFF RAFF opens the album with incoherent lines, “Got more ice than a snow fox, three wheel through Jack In The Box half a brick in my sock” and “Codeine in my blender, ‘ring ring who is it? Collect call from Bruce Jenner’”. With no purpose or intent on connecting his bars, RiFF raps for the purpose of making random words rhyme.

Where Peach Panther sets itself apart from his debut album Neon Icon is a more defined homage it pays to his hometown of Houston. “4 Million”, while continuing the pattern of lyrical dribble, offers the feel of early Swishahouse with an infectious southern chorus and chant, “Leanin’ on leather, seats back on recline/I only made $4 million last year.” The HiGHROLLER successfully loses the steam that the chorus and production garners with 100% Jiffy Cornbread bars as, “Ion’t never ask for help, shot more jumpers than Tony Delk”. Comparing his ability a professional mediocre-at-best NBA player with career averages of a paltry 40% from mid-range and 9.1 points, is the most honest look RiFF RAFF has ever taken at himself.

The positive takeaways from Peach Panther lie in the consistent production from start to finish. If listening to unintelligible ramblings about glorifying drug use is your bag at least you have a solid, well-produced sound bed to indulge in. RiFF RAFF does a solid job in securing the right beats. Danny Brown and G-Eazy serve as a much needed lyrical break on “I Drive By” and “Mercedez” respectively. With Peach Panther, there at least appears to be an attempt at cohesiveness; unlike Neon Icon, which was laid out as a collection of poorly mass-produced Jordan cry memes in hopes that one of them goes viral.

Peach Panther panders to the worst qualities of rap. Sure, there are other rappers who recklessly glorify drug use in their music. RiFF RAFF didn’t invent that. There are other successful rappers that have about as much depth as a thimble filled to the brim. The difference is that those others are at least entertaining. The low points on this album run rampant and completely usurp the minor advances RiFF actually made. At the end of the day, Peach Panther harkens imagery from a scene from Adam Sandler’s classic Billy Madison, “What you’ve just said is one of the most insanely idiotic things I have ever heard. At no point in your rambling, incoherent response were you even close to anything that could be considered a rational thought. Everyone in this room is now dumber for having listened to it. I award you no points, and may God have mercy on your soul.”