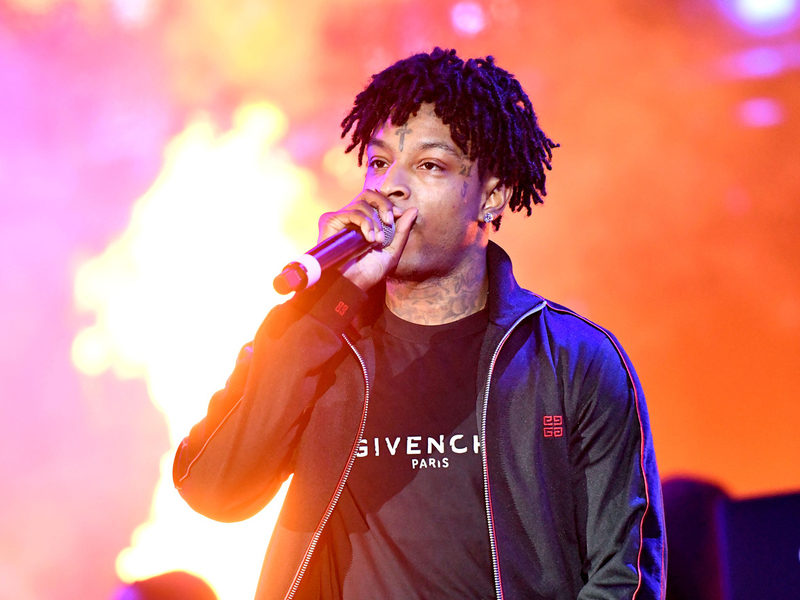 HipHopDX – This week in Hip Hop, 21 Savage was released from ICE custody and made an appearance on Good Morning America to speak about the situation. Also, up-and-coming rapper YNW Melly was charged with the murder of his friends. Lastly, the 2019 Grammy Awards featured some big wins for Hip Hop.

21 Savage has officially been released ?

After spending more than a week in ICE’s custody, 21 Savage posted a $100,000 bond and was released on Wednesday (February 13).

Following his release, the I Am > I Was artist stopped by Good Morning America on Friday (February 15) for an interview about his experience. When asked about whether or not his reworked “A Lot” verse about immigration had something to do with his arrest as many believe, 21 was unsure.

“My lawyers think that,” 21 said. “I don’t really know. I can’t really say. I would see why people would think that.”

The Atlanta-raised rap star, born She’yaa Bin Abraham-Joseph, was arrested by ICE on February 3. In the process, his British citizenship was revealed to the shock of many fans.

Due to his ICE detainment, 21 missed out on his planned appearance at the 61st Annual Grammy Awards on Sunday (February 10). His multi-platinum hit “Rock Star” with Post Malone was nominated for Record of the Year and Best Rap/Sung Performance.

YNW Melly was arrested for allegedly murdering his two friends YNW Sakchaser and YNW Juvy. He was charged with first-degree murder on Wednesday (February 13) along with a 20-year-old man named Cortlen Henry.

“Jamell Demons, a.k.a. YNW Melly & Cortlen Henry have been arrested and charged with two counts of first degree murder,” Miramar, Florida police wrote on Twitter. “The victims, Anthony Williams & Christopher Thomas Jr., were killed on 10/26/2018. The investigation, supported by forensic evidence, has concluded that Demons shot and killed Williams & Thomas Jr. and that Demons and Henry staged the crime scene to resemble a drive-by shooting.”

Before turning himself in, Melly posted a picture of himself and the alleged victims while maintaining his innocence in the caption.

“I want you guys to know I love you and appreciate every single one of y’all, a couple months ago I lost my two brothers by violence and now the system want to find justice,” he wrote. “Unfortunately a lot of rumors and lies are being said but no worries god is with me and my brother @ynw.bortlen and we want y’all to remember it’s a ynw Family I love you @ynwsakchaser1 and 2ynwjuvy #freeus.”

Following his arrest, his 2017 song “Murder On My Mind” rocketed up the Apple Music charts.

That boy @JayRock looking fresh with that #GRAMMY!

Childish Gambino was one of the night’s biggest winners. He nabbed awards for Record of the Year, Song of the Year, Best Music Video and Best Rap/Sung Performance. Elsewhere, Drake won Best Rap Song for “God’s Plan.”

Another huge win was Cardi B, who took home Best Rap Album for Invasion of Privacy. She dedicated her win to the late Mac Miller, whose Swimming album was also nominated in the category.

Cardi’s win was celebrated by many, including J. Cole and Pusha T. Not everyone was celebrating Cardi’s win though as she received some backlash from those who felt she didn’t deserve the accolade. This prompted her to temporarily delete her Instagram.

Redman stopped by HipHopDX HQ in Hollywood and spoke about a variety of things. Eminem’s rap battle with Machine Gun Kelly was among the many topics, prompting Funk Doc to reveal the one topic he felt MGK was out of line for mentioning.

“I was like, ‘Damn, my boy Em is wearing a lot of sweatsuits nowadays.’ Maybe that’s his comfortability. For him to say, you know, ‘them corny sweatsuits,’ I laughed, but I sad you know what, he’s young and maybe one day he’s gonna understand what wearing sweatsuits is about when he gets a certain age.”

Understanding The Distinction In Jacquees’ King Of R&B Claim

HipHopDX writer Cherise Johnson spoke with Jacquees, who recently made waves by claiming the “King of R&B” title. But, he wants to make it clear he’s only speaking for his generation.

Snow Tha Product Reflects On Her Career As She “Vibes Higher”

DX’s Bernadette Giacomazzo caught up with Snow Tha Product to talk about her latest album Vibe Higher in an exclusive interview.

“You know, I’ve been around for a long time. And I pride myself on not only being around for such a long time but consistently elevating in everything I do. I’m now in a place where I have artists under my own label now that I’m independent. People ask me if I’m scared of that, but what have I got to be scared for? I’ve been doing it this way for the longest time.”

Funky 4 + 1 was the first Hip Hop act to ever make an appearance on network television, performing “That’s The Joint” on Saturday Night Live thanks to the help of Blondie frontwoman Debbie Harry. HipHopDX looked back at the historic moment for Throwback Thursdays.