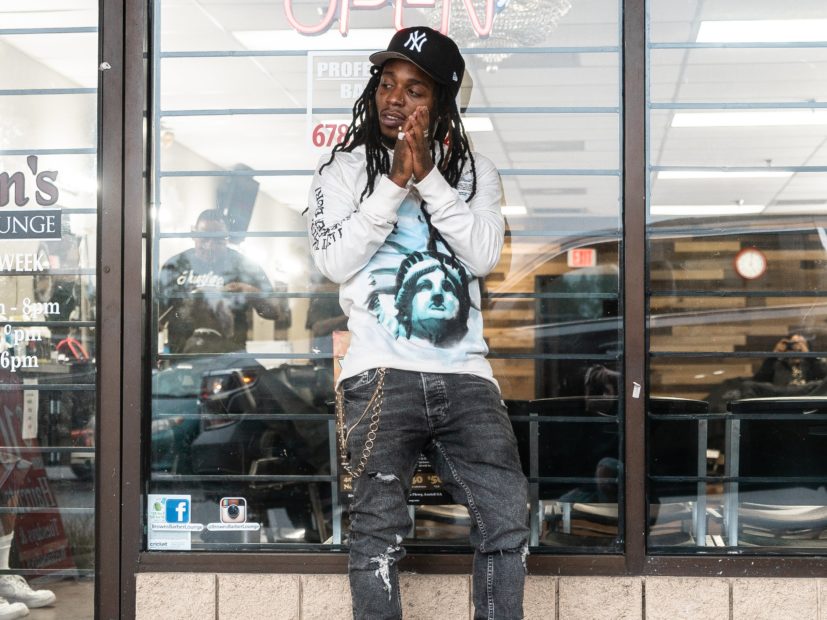 Courtesy of All Def Music

Interview: Understanding The Distinction In Jacquees' King Of R&B Claim

Los Angeles, CA – A young Jacquees took pride in serenading the streets of his Georgia neighborhoods by filling the midnight air with his opulent vocals under the streetlights. The energetic R&B artist, born Rodriquez Jacquees Broadnax, also found solace at his local barbershop and beauty shop. It’s there where he would captivate the ears of everyone sitting in a chair, opening the floor for him to take throne as the king of R&B.

Jacquees’ love for singing is genuine and it’s easy to identify the connection after watching All Def Music‘s new series All In directed by Mandon Lovett, which debuts Friday (February 15). The doc offers those in doubt of Quee’s existence in the R&B space an opportunity to open their hearts and minds to what the Atlanta native has to offer.

The Cash Money-signee stands tall and talks with pure confidence. The burgeoning star knows he’s talented and is sure there’s no other R&B singer out there doing it like he is.

After an exclusive screening of All Def Music’s docu-series, Jacquees spoke with HipHopDX about his recent king of R&B declaration as well what he hopes for people to get from his All In episode.

All In serves its purpose in allowing those who want to understand where Jacquees is from, why he’s so passionate about singing and why he will never stop. The 24-year-old will sing at any time, if for any other reason than to fan out the range of his vocals across not only his own tracks but some of the songs he’s featured on and of course, the songs living on his celebrated QueMix series — where he creates his own bops from existing popular songs. It’s a technique many rappers from the beloved mixtape era utilized back in the day, including Lil Wayne.

In 2014, Jacquees signed to Cash Money Records and independently released his project 19 which contained a lot of major features from Chris Brown to Rich Homie Quan and hit No. 15 on the Billboard Top R&B Albums chart. Two years later his single “B.E.D.” spent seven weeks on the Billboard charts, which was followed by the success of his 2018 debut album 4275.

One of Quee’s biggest singles from 4275 “You,” just got a fresh verse from labelmate and bubbling rap star Blueface, thanks to Birdman Stunnaman who put the play together for it to happen.

It’s also not uncommon for Jacquees to sell out a venue to a crowd of screaming young teenagers hanging on to every word he belts out while putting on the ultimate performance for them.

Even with all these accomplishments, when he boldly proclaimed the “King of R&B” title in December, the internet stopped in confusion. All eyes were diverted to Jacquees and his brave statement.

As social media lolled into an uproar, the DX staff got in on the “King of R&B” debate to discuss what holding that title actually means.

“Does anyone think Jacquees has potential to be the king of R&B? The rest of the R&B boys are shook by his statement,” I asked during the debate.

Doubt ensued and he was dragged all over Twitter and Instagram. His “King of R&B” proclamation shook tables and the names of R&B singers perceived to be better contenders of the crown were named. It prompted a loud response from fellow R&B counterparts including the Grammy Award-nominated J. Holiday — who ain’t valet, baby — to a cry-laughing emoji from frequent collaborator Trey Songz as well as the disgraced R. Kelly.

By now, everyone should be aware that Jacquees doesn’t care at all what the naysayers have to say about his “King of R&B” self-declaration. He said what he said.

“I’m the king of my generation and that’s just what it is,” he doubles down during our conversation.

Emphasis on his generation and he has a point. He can sing, dance, write and his fanbase is as loyal as they come.

The point Mr. Broadnax realized he had a generation of younger R&B lovers in the palm of his hands was after a show he did in Rochester, New York, and a radio host christened him with the title.

“I had just did a show and they was like, ‘Jacquees just left this city and Jacquees the king of R&B.’ I had heard it on the radio and I was at a bar. He said, ‘Shoutout to Jacquees he just got off stage…’ at whatever radio station it was and he was like, ‘Man if you just think about it, if you ask the kids anything they listening to Jacquees. Jacquees, he the king of R&B for his generation.'”

After hearing the praise, he saw other subtle signs that the title was his before making the decision to go on Instagram to let the world know he was the rhythm and blues king.

“I had got a drink at the bar and then I remember I was just thinking and I was just sitting there by myself…I don’t ever sit in the airport by myself,” he recalls. “So then, I’m like, I’m the king of R&B you feel me? My cousin had just commented on my Instagram, he was like ‘King of R&B,’ and then one of my friends called me and was like you need to call yourself king and I was just like I’m the king of R&B for this generation. I just heard him say it. I don’t care who don’t like it because you got to believe in yourself.”

The state of R&B has been quite shaky over the past couple of years but there’s been a resurgence of fresh singers who are upholding the genre including Jacquees and according to him he’s already reviving the genre.

“I’m already doing it,” he says. “I’m making real R&B music. My R&B music don’t sound like nothing from my generation. It sound like the music that came before me, you feel me? That’s what I’m going to keep doing.”

Jacquees is currently touring through the month of April and his sophomore effort Round 2 is coming soon. The music video for Round 2‘s first single “My Peace” featuring Lil Baby is slated for release next week.

Watch the trailer for All Def Music’s original docu-series All In featuring Jacquees below.