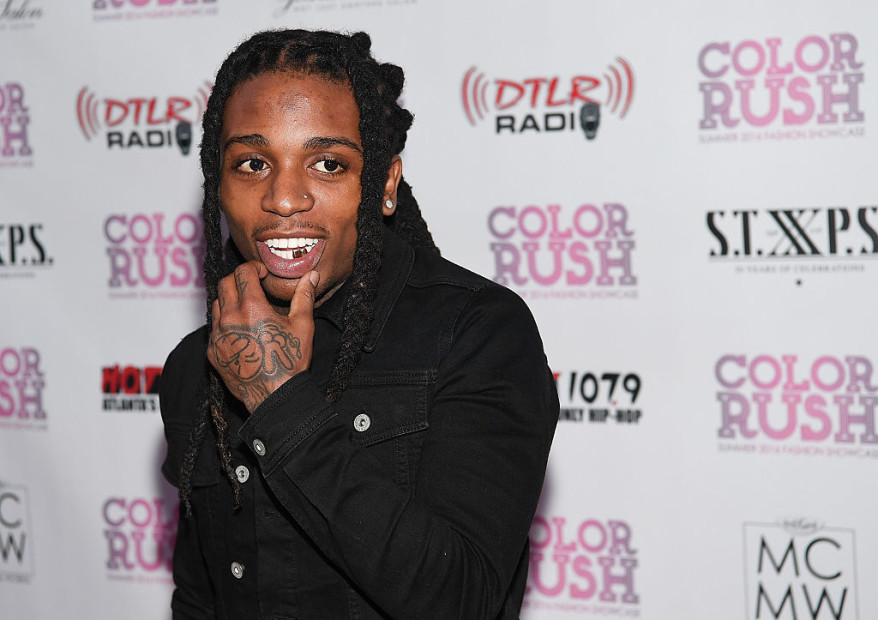 On a tranquil Sunday evening, Cash Money signee Jacquees made a quick appearance at the DTLR Color Rush Fashion Show in Atlanta. Hometown visits are becoming more and more infrequent for the 22-year-old singer now that his latest project, Mood is picking up momentum. “The reception has been crazy,” he tells HipHopDX on the red carpet. “They love Mood. Everybody in the streets loves Mood. I gained a whole rack of new fans and all my old fans love it. I’m going on tour because of this project. It’s been really successful.”

Jacquees has been at it for about five years now with his first release I Am Jacquees setting the tone back in the summer of 2011. Using painstaking deliberation, he built a network of supporters. Having signed to Birdman’s imprint 18 months ago, it seems that Jacquees has finally caught his wave—even amidst the turmoil bubbling over at that particular imprint. To date, the R&B crooner has remained out of the fray, instead, focusing on the music and the people that assist in making it great.

“[Jacquees]’s really passionate about this shit, it’s all he ever wanted to do, and I think people can really see that. On top of that, this nigga built his fan base up since he was 12, 13 years old. It’s not false. Those million followers on Instagram is real. You already have a million followers and they’re not even really playing you on the radio like that? Can you imagine what happens once they start putting this shit into rotation?”

Radio rotation may be happening sooner than later. There’s a 27-city tour that kicks off this weekend (April 30) and when asked about the details, the Mood creator can barely contain himself. “This is my first headlining tour,” he says excitedly. “I went on tour back in the day with FYB but this is the first one with me by myself so I’m excited. It’s gon’ be fun.”

FYB or Fresh Young Boys was a rap group of sorts—formed in his teenage years, Jacquees joined forces with four other young men, made music and hit the road. They built a fan base of loyal devotees who, at the time, were adolescent girls. Those fans that he mentioned having rocked with him long before Mood? They’ve been around since then.

“I’m just keeping it street, keeping it real and being myself. What made me want to be a singer, was just me, that’s what I’ve always wanted to do, it’s just what I got passion for,” he insists. “That’s my first love but I love music so I’m able to be versatile in the game and make records like “Like Baby” and still come back and make records like “Bounce.” Just keeping it fresh, I’m young so right now I’m just doing my thing but niggas know what it is when it comes to R&B.”

“See, I don’t wanna be a rapper,” he says simply. “I just wanna be Jacquees. I been doing that. If you’ve been a fan of me then you know I’ve been putting rap songs on my mixtapes. I’m not a rapper, I’m definitely a singer.”

As quickly as Quee steps onto the red carpet he’s being guided to the next task that Sunday evening. There’s always something to do. Life is coming fast now—essentially all good things though. The young artist is nonplussed regarding anything extra.

Bryan ‘Baby’ Williams, the head of his label home, Cash Money Records, has found himself in the headlines again after a particularly intriguing “interview” on Power 105.1’s The Breakfast Club last week. But Jacquees’s allegiance is unwavering, when asked about his relationship with Williams, the singer shares, “That’s my ace. Baby is my unk.”

“Our [work] process is easy,” he explains. “We can go out, come back to the studio and write a song about what we just did because the lifestyle is so lavish and so big. There’s so much to talk about.”

“Stunna is a legend,” he continues with conviction.

Jacquees is in the mood to win. There’s no time for anything else.