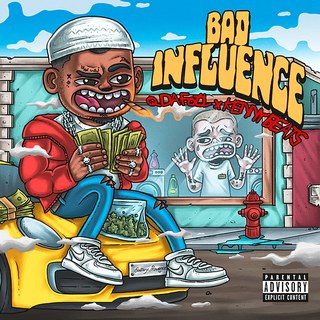 There are few things that an emcee can appreciate more than a beatmaker that really “gets it,” and creates beats that are specifically designed for his flow.

Roc Nation’s Q Da Fool may have found that beatmaker in Kenny Beats, and it’s evident in the six-track tete-a-tete that they’ve dubbed “Bad Influences.”

There’s something that we, as reviewers, need to come to terms with when discussing Kenny Beats, in particular: the rising star does so well because he’s able to shape-shift with the times and the flow. This can be annoying, especially when we’re used to beatmakers that have a signature sound (think Apollo Brown or Jahlil Beats), but once you get used to how he works, it actually makes more sense than not.

Rather than tell the artist to adapt to his style — thus trying to fit a proverbial square peg into a round hole — Kenny flexes his muscle behind the board to adapt his style to the artist.

As such, he’s able to produce vastly different sounds for vastly different artists. Just ask Ab-Soul, Kendrick Lamar, and Rico Nasty — all of whom have experienced the joy of a Kenny Beats-produced track — whose sound is universes, let alone leagues, apart from the DMV native currently on JAY-Z’s roster.

So here we are with “Bad Influences.” One thing you have to give Q (real name: George Hundall) credit for is his ability to hit us with sick wordplay. On the opener, “Drop,” he paints a post-apocalyptic picture as he spits, “Got her legs up/Like a Tesla truck/Bitch said I fucked her bed up/Made her catch the nut.” His style hearkens back to the early days of Lil’Wayne, back when he wasn’t BSing or zoning out on lean, and he’s as sharp as a tack with the flow.

The rest of the album flows in much the same way, with rapid-fire spit matching wispy, almost delicate beats. The combination only really falls short with “Had Shit,” and that’s only because the duo depends too much on Auto-Tune to make this track really have an impact. Auto-Tune belongs on pop tracks featuring Justin Bieber, not Hip Hop tracks featuring solid emcees and beatmakers.

Other than that, though, this is a nice solid offering from a duo who collaborated for the first time, but hopefully, not the last. Q Da Fool has a sound that is formless, shapeless, and fluid all at the same time, which makes him the perfect foil for Kenny Beats’ equally fluid sound and style.