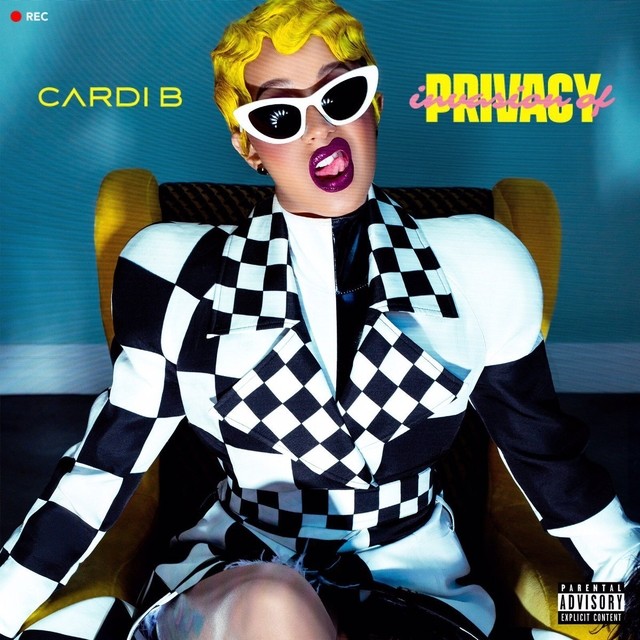 Prior to any accolade, analytic or analysis of the full product, Cardi B went into the release of her debut album, Invasion Of Privacy, already a winner.

Her invincible 2017 single, “Bodak Yellow,” put her in a small circle in terms of chart-topping female rap records. Not only did she single-handedly add musical credibility to VH1’s controversial Love & Hip Hop soap opera, “Bodak’s” monstrous success broke barriers. She became the first female rapper to land her first three entries in the Hot 100 top 10 and Hot R&B/Hip-Hop Songs charts but also the first female period to have five top 10 singles on the Billboard Hot R&B/Hip-Hop chart at the same damn time.

Which makes the circumstances going into Invasion Of Privacy even more interesting.

Released virtually a year after “Bodak” dropped, it’s a clean slate from her previous non-major label sanctioned Gangsta Bitch Music albums. At 25-years-young, Belcalis Almanzar is now an international celebrity who dictates her own path through the game; one that’s not necessarily dictated by traditional Hip Hop standards. Yet, the album — especially the one that lays claim to inaugural status — still maintains its king hierarchy, whether it’s for labels to compile record sales through stream numbers or the two-hour award show schmoozing designated for that final reveal.

Invasion Of Privacy is set in the present day where Cardi is the hottest in the game and supreme attractor of all things Gucci Gucci, Louis Louis, Fendi Fendi, Prada, et al. Despite possessing an undeniable entertainment factor packed with colorful and bassy beats, every song practically leans on the same topics, an apparent result of being pressured to be a hitmaker at such an early stage in her career. Rarely does a bar whiz by without reminding “these hoes out here” (or bitches!) how they aren’t on her level or how hard she worked to “get the bag.” The few times she steps out her killzone results in messy break-up anthems such as the languid “Be Careful,” a pop chart over-reach where strained vocals and vulnerability make for a mismatch.

To her credit, Cardi is fully capable of spitting bars with brazen energy. Her Boogie Down Bronx overtones are on full tilt on the opening of “Bartier Cardi” where she explodes, “Red bottom MJ/Moonwalk on a bitch/Moonwalkin’ through your clique/I’m moonwalkin’ in the 6/Sticky with the kick/Moonrocks in this bitch!”

The equally swaggy “Money Bag” is another aggressively fun performance that neatly checks all the Cardi persona boxes. Too bad the same can’t be said for the Chance The Rapper-featured “Best Life,” whose comeuppance motto can’t save it from criticism due to Chance’s wonky and annoying chorus and Cardi’s facepalm emoji bars: “I’m like Big Pop’ mixed with 2Pac, I’m like Makaveli/You need some Little Caesar’s pizza, I be Hot & Ready.” Eesh.

A huge chunk of “Bodak’s” storyline is the fact Cardi borrowed heavily from Kodak Black’s “No Flockin'” to create her own masterpiece; a practice continued throughout Invasion Of Privacy. While this approach to songwriting sheds light on her still developing talent, it’s also an area of expertise. On “Bickenhead,” she resurrects Project Pat and Three 6 Mafia’s 2001 battle of the sexes classic, “Chickenhead,” with a Bardi bop and bounce that’ll become an indefinite staple in clubs in the future. Similarly on “I Like It,” Cardi taps into the BX bodega lure with the sampling of “I Like It Like That” for a suave cat-calling jam that invites Bad Bunny and J Balvin along for the ride in an obvious effort to sample whatever “Despacito” ordered on the menu. And even though it sounds terribly like “Get Right Witcha’s” little brother, Cardi comfortably comes off as the fourth Migo on “Drip,” as she and her extended familia go to great lengths forecasting the temperature of all their ice.

Seeing that there’s no clear album direction other than creating heat, the debut ends on a rather uneven note. Following the petty “Thru Your Phone,” album closer “I Do” diminishes the uncanny talents of SZA to a formulaic chorus and leaves listeners with the messages of “bad bitches,” “broke hoes” and “Gucci” for the curtain call.

With an album title in Invasion Of Privacy, it would have been remarkable for Cardi to flip the openness of her Instagram page into an audiobook and not succumb to the invincibility cloak that comes along with a rap star title. Still, when you combine this decent first outing and relentless work ethic, there’s no question Cardi is here to stay.

After all, she already conquered the one-hit wonder rep.