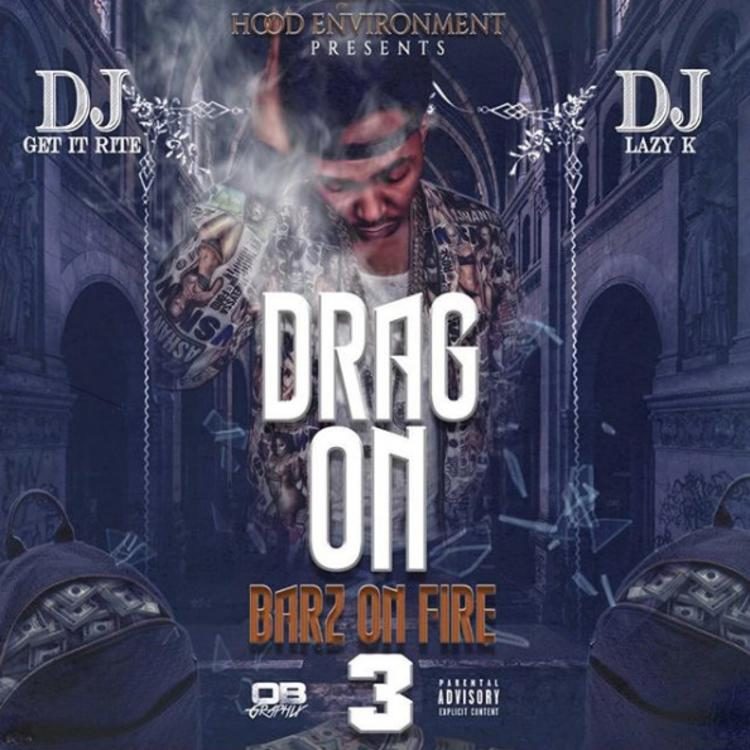 During the past year, a handful of Hip Hop veterans have caused a stir by either demanding credit or lampooning younger rappers. Last year, Pusha T artfully did it on Daytona. And last month, Soulja Boy cartoonishly claimed he was behind Drake’s success.

On his new mixtape Barz On Fire 3, Ruff Ryder vet Drag-On spends the majority of his time either questioning the street cred of new rappers or complaining about his lack of respect. As his career finishes its second decade, he still raps with bravado and candor. However, the project mostly sounds dated and lackluster.

Barz On Fire 3 kicks off with a remix of Jaden Smith’s 2017 hit “Icon.” Drag-On’s rendering is much more hard-hitting and showcases his technical superiorities over the young star. DJ Get It and DJ Lazy K pepper the track with gunshots and beat-switches, while Drag-On vigorously raps over the epic beat. “Pistol On My Side” builds off the intro track’s momentum with the Bronx rapper spitting back-to-back bars laced with threats. On another highlight, the former Ruff Ryders signee conjures up East Coast nostalgia on “Yo Momma Proud” — a diss song with some humorous punchlines.

But things take a turn for the worse on “Wave Hopper.” Over Crazeonthebeatz’s minimal production, Drag-On goes on a tirade against current artists. He opens up with the bars, “The next rapper I catch wearing a halter top/ I don’t care what’s in the clip, he’s getting all the shots/ Their pants showing the shape of their kneecaps/ I’m trying to figure what section they get their jeans at?” Instead of sounding like a legend bestowing wisdom to misguided youth, he comes off as out of touch and cranky.

Drag-On also leans into homophobia on “Who Run It.” In addition to the generic production, the insults fall flat. After suggesting that new rappers are all “deep-throating,” he throws subtlety out the window with his closing taunt. “Whose dick did you suck to get that deal?” Arguably, Drag-On is just continuing a decades-old tradition of diss songs. But it’s 2019 — gender-bending artist Young Thug frequently collaborates with much more masculine rappers, Brockhampton signed a lucrative deal with RCA — get over it, move on, and come up with something else.

Besides the enjoyable “G-Way” and a fairly decent remix of “Taste,” Barz On Fire 3 is mostly mediocre. The lowest point is “Tsunami,” a sensual track featuring R&B singer Ru Williams. The song oozes corniness. Once again, Drag-On sounds like he was teleported in from a completely different decade. Things gets cringeworthy when he raps: “She told me her pussy get wet like a tsunami/ I said a tsunami? She said a tsunami/ I will probably get wet but be careful don’t drown me.”

Though Drag-On surely still possesses technical ability, Barz On Fire 3 is filled with half-baked ideas and canned, cliché production. Almost a decade and a half after going independent, Drag-On remains talented but frozen in time.