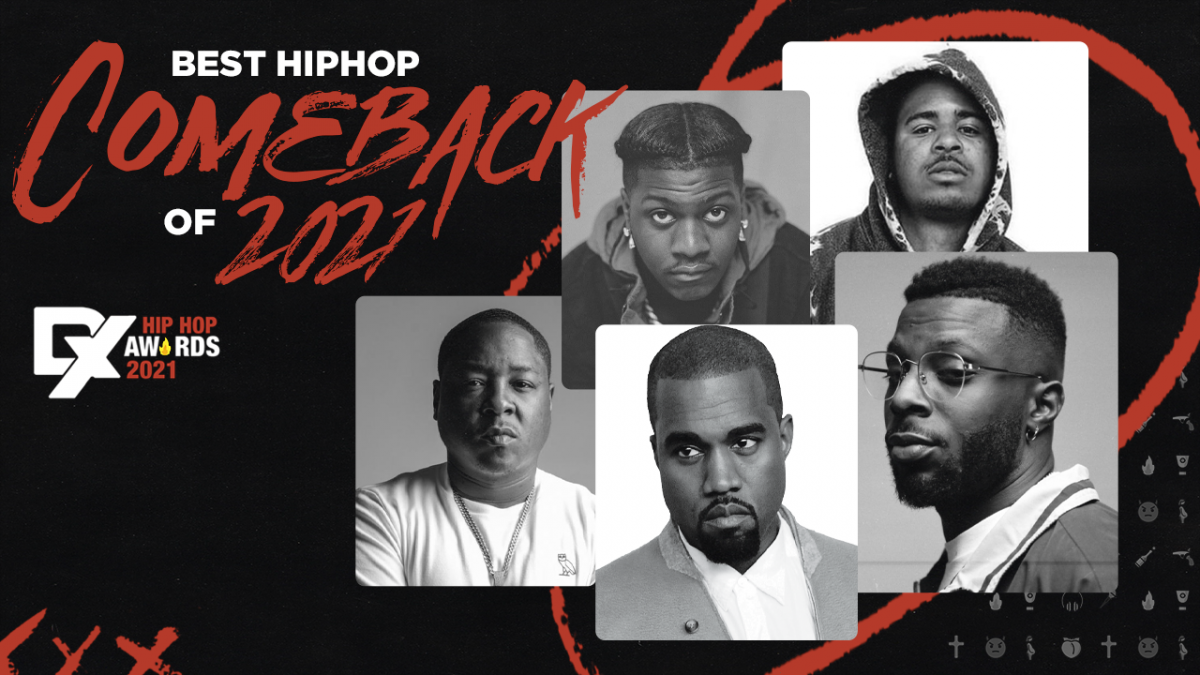 Whether it’s sports, entertainment or music, there’s a curious fascination when a celebrity either returns to form or does enough to get back on the public’s radar. The art of the comeback is one of the few times these larger than life figures feel relatable. We’ve all been down and out or counted out completely before, so seeing a return after a fall from grace can be inspiring and change the perception of the entertainer forever.

After a tumultuous 2020, 2021 felt like a time to get back on the horse and take baby steps forward to the dreams that were deferred. In rap music, this made for some beautiful comebacks. There were changes in public perception, music quality, artistic output, importance and even a reminder of the legends we take for granted. From Isaiah Rashad turning his whole life around to Drakeo the Ruler making the most of being a free man, it’s time to take a look at the nominees for HipHopDX‘s Comeback Of The Year in 2021.

The 2021 Comeback of the year award goes to…

Following the release of his critically acclaimed sophomore album The Sun’s Tirade in 2016, Isaiah Rashad all but disappeared. He later revealed he was drowning in substance abuse and self-doubt, which left him broke and crashing on a friend’s couch. But his close bond with his fans and their undying patience for new music meant the door was always ajar for Zaywop’s return. And after getting his shit together in rehab, he kicked (better yet, burned) it down with his long-awaited third LP The House Is Burning. Featuring a blend of cryptic poeticism, stoned melodies and production that sounds like J Dilla mixed with Juicy J — plus collaborations with the likes of Lil Uzi Vert, SZA and Jay Rock — the album put the TDE MC in the top 10 of the Billboard 200 for the time in his career. Isaiah Rashad’s return is a true comeback story in all senses, making him a no-brainer for HipHopDX’s Comeback Of The Year award. 2021 was Drakeo The Ruler’s first year as a free man in a few years, and best believe he made the most of it. Despite being acquitted of murder in 2019, the L.A. rapper — who is one of the most unique wordsmiths this side of Ghostface Killah — remained behind bars as prosecutors argued his music was proof his rap group, the Stinc Team, was a violent gang lead by The Ruler. Following his eventual release from prison in November 2020,  Drakeo took his pioneering brand of sinister West Coast rap to new heights by releasing five full-length projects and collaborating with the likes of Drake, Saweetie and Blxst; the 6 God-assisted “Talk To Me” put Drakeo on the Billboard charts for the very first time. Even a bizarre (and potentially targeted) arrest for riding in an Uber with tinted windows in August couldn’t restrain the Cold Devil’s comeback campaign. Jadakiss entered 2021 as a Hip Hop legend. But his veteran career enjoyed an unexpected second wind in 2021 thanks to his MVP-worthy performance during The LOX’s Verzuz bout against Dipset in August. Putting his decades’ worth of rapping precision, stage presence and battle-tested rebuttals on full display at Madison Square Garden, Kiss carried the Yonkers trio to a commanding victory over their less-prepared Harlem counterparts. Jada’s dominant display made him the toast of the rap world, with LeBron James crowning him “the most underrated Hip Hop artist of all-time” and Tyler, The Creator confessing to a man crush. Jada even earned a last-minute spot on Kanye West’s Donda album alongside Styles P and Sheek Louch. To deliberately misquote LL COOL J, don’t call it a comeback; Kiss been here for years. To say Kanye West “fell off” would be untrue, but after the muted reception to ye and Jesus Is King — not to mention his divisive political moves — it felt like he had lost his grip on the Hip Hop zeitgeist. But all that changed with Donda. Teased out and tweaked across a trifecta of sold-out stadium-status listening sessions at the height of his reignited cold war with Drake, Ye’s 10th studio album was the type of spectacle only Kanye could produce. Donda’s impact was reflected in the stats, breaking Spotify and Apple Music’s first-day streaming records for 2021 while earning Mr. West his highest sales week since 2013’s Yeezus. Away from music, Kanye’s explosive Drink Champs episode will go down as one of the most memorable rap interviews of all time. After all, history has shown Kanye West is at his best when he’s got a point to prove. There was a point when Lil Yachty was the most unique and buzzing rap star in the world among young fans. The Atlanta native has remained relevant in recent years, but never quite reached the peak stardom found on his Lil Boat mixtape. His new chapter, though, shows off a mature Yachty, one who’s willing to use his clout to get others recognized. Lil Boat played ambassador to Detroit’s fertile rap scene on his Michigan Boy Boat mixtape and appeared on Kanye West’s Donda, a full-circle moment following his modeling gig at Ye’s Life of Pablo MSG show while “broke” five years ago. Elsewhere, Yachty continued to chart new territory by securing a string of major movie bags, expanding his investment portfolio and welcoming his first child into the world. In 2021, the former king of teens became a full-fledged adult, and it’s working out well for him.

Race-related controversy threatened to derail Doja Cat’s breakout year in 2020 after her internet skeletons were dragged out of the closet, including an old song named after an alt-right term used to disparage Black victims of police brutality and footage of her flirting with alleged white supremacists in a video chat room (ask N.O.R.E. or Nas). But in 2021, Doja bounced back with Planet Her, which spawned three top 20 Billboard Hot 100 hits while debuting at No. 2 on the Billboard 200 itself. Adding to the array of awards she won this past year, Doja Cat heads into 2022 as the second most-nominated artist at the 64th Annual Grammy Awards, among those a nod for the prestigious Album of the Year award.

Although his Dipset crew got dismantled by The LOX during their Verzuz battle at Madison Square Garden in August, that doesn’t take away from the strong year Jim Jones had in 2021. The Skull Gang capo extended his late-career hot streak with The Fraud Department, a joint effort with New York street rap whisperer Harry Fraud, as well as a cameo on the deluxe edition of Young Thug’s YSL compilation Slime Language 2. Jimmy isn’t done yet; he’s closing out the year by dropping a Gangsta Grillz mixtape with old friend DJ Drama called We Set the Trends.

Much like Jim Jones, it’s been over a decade since Lloyd Banks was at his peak. But as Roc Marciano and Griselda’s popularity has shown, there’s still a healthy appetite for traditional Rotten Apple rap. Banks signaled his unexpected comeback at the top of the year with the aptly-titled “Element of Surprise,” taken from Griselda’s Conflicted soundtrack, before dropping his first album in 11 years, The Course of the Inevitable, in June. Sounding as sharp as ever, the Punchline King’s return was welcomed by fans and fellow rap legends alike such as J. Cole, Raekwon and DJ Premier.