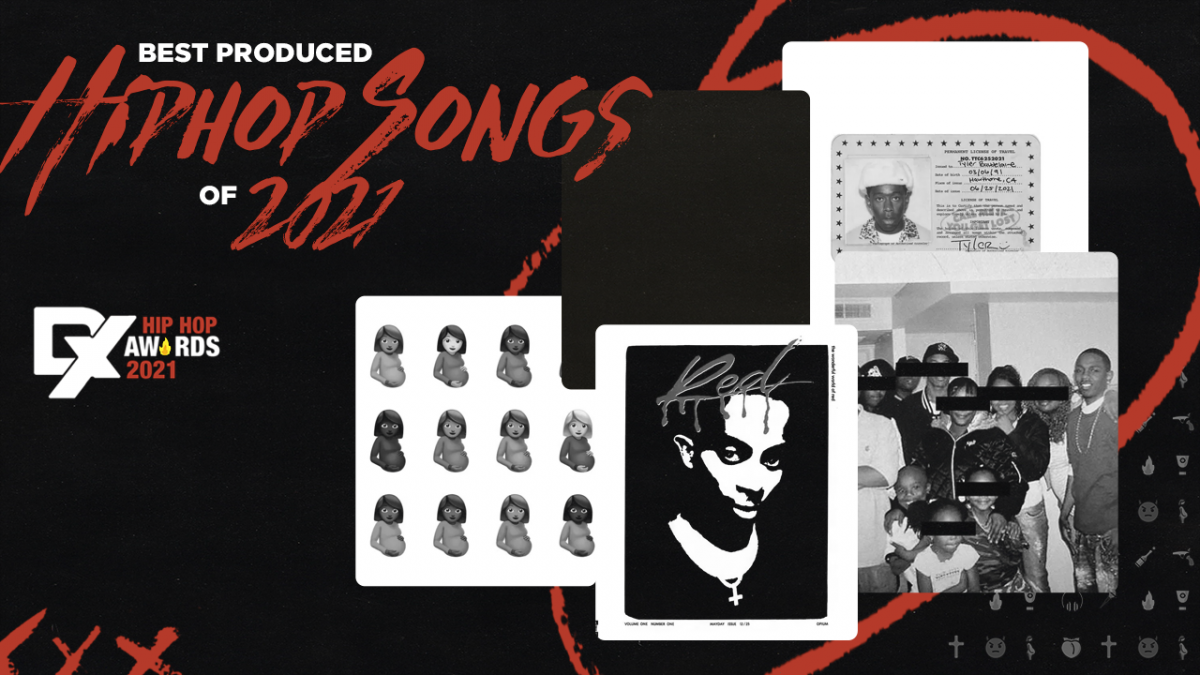 Here’s a hot take — for the first time in Hip Hop’s history, the producers are more reliable than the artists when it comes to the music.

The year 2021 saw plenty of hot hip hop production that still allowed artists to have their voice shine through and HipHopDX has compiled our pick of the litter through this year’s nominees.

HipHopDX has narrowed down the best Hip Hop songs with the most inescapable and instantly recognizable hip hop production that served as essential backdrops to equally great performances.

Check out the nominees for Beat Of The Year below.

What better way for Kendrick Lamar to introduce his cousin, lyrical protégé and pgLang artist Baby Keem than to appear on a track with him — that allows both of their personalities to shine through? That’s exactly what the aptly titled “Family Ties” displayed in terms of sound and synergy atop rousing split production.

The Las Vegas-born, Cali-raised MC reveled in his life story over triumphant horns and a thundering stampede of 808s. It’s a tale of perseverance and a winner’s ending all in one swoop. For being equally important and dynamic, “Family Ties” notches HipHopDX’s 2021 Beat Of The Year. In today’s rabid streaming era, it’s best to make an incredible impression upon the first play. It’s a practice Drake knows all too well, seeing that Certified Lover Boy emerged as his 10th Billboard No. 1 album and its opener, “Champagne Poetry,” ignited the pens in more traditional MCs such as Freddie Gibbs, Lupe Fiasco and IDK.

As far as Drake album intros go, the song  ranks amongst his most memorable as the Toronto rap legend gives a healthy dose of revelations across the two-part track. The production elements range from echoing bass to a heavenly choir crescendo.

Mr. Kendrick Lamar has been cryptically spoon feeding fans since the release and sunset of his 2017 album DAMN. and for one of his only guest features in 2021 (the other being another Baby Keem collaboration “Range Brothers”), he ensured his presence was felt; lyrically shitting on today’s streaming-and-sales metrics over a dark, grungy instrumental that personifies the Mad Rapper from the Black Lagoon.

The complex track took the collective team of Cardo, Outtatown, Roselilah, Deats, Jasper Harris, Frankie Bash and Baby Keem himself to construct, making for a melting pot that equated to one of the biggest moments in Hip Hop musically this year. “Genius” is the best description for Kanye West’s decision to hold not one but three sensationalized listening events for his latest album Donda in the heart of 2021’s quarantine unraveling.

The highly publicized livestreams gave the music the undivided spotlight, birthing the dawn of the manic instrumental “Jail.” While the changeup of guests in JAY-Z, DaBaby and Marilyn Manson speak to the aforementioned attention-grabbing hijinks, the electrifying pulse of the guitars make “Jail” immediately captivating hip hop production. After having a Christmas Day debut, Playboi Carti’s Whole Lotta Red was the listener’s gift that kept giving throughout 2021. The Billboard No. 1 album painted fans with a kaleidoscope of sound — with the Art Dealer-produced “Sky” being the most colorful of the bunch. The track assumes an 8-bit Nintendo-esque DNA as Playboi Carti’s marijuana-scented lyrics act as a vortex of euphoria.

“SWEET/ I THOUGHT YOU WANTED TO DANCE” – Tyler, the Creator Much can be said about Tyler, the Creator’s CALL ME IF YOU GET LOST as a standalone instrumental album. The cinematic LP musically unfolds as a labyrinth of unpredictability — with patches of island and afro jazz, 1970s funk, smoothed-out rock all encapsulated in a record dust taco.

Remarkably enough, the Brent Faiyaz and Fana Hues-featured “Sweet/ I Thought You Wanted To Dance” served as one of the pristine R&B moments of 2021 because of its hip hop production. The 10-minute after-disco romp lives up to its sugary title with a sparkling opening that personifies a drop of honey on the tongue before oozing into a sensual reggae-pop slow jam.