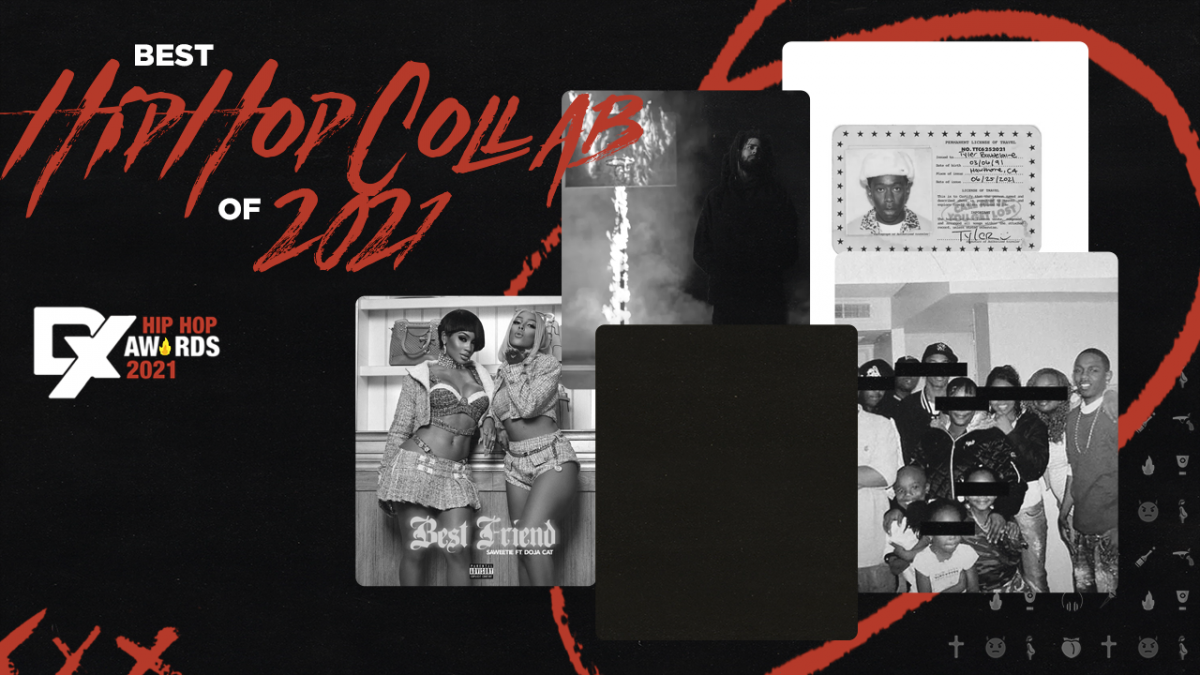 2021 served as a year to recalibrate with everyday life despite evolving Covid-19 variations. People shook off the fear they had for their neighbor and started to interact again. Times Square is filled with tourists again—people are back together.

If this year proved anything, it’s that rap music benefits when people are able to physically come together to create a record. While emailed verses are fine, it’s unmatched against in-person chemistry in the booth. During a time where a new genre is created by the second, collabs couldn’t be richer.

The nominations for 2021 Collaboration of the Year showcased different styles that meshed together to create new and refreshing results. From Kendrick Lamar saying, “Top of the morning” in a trance repeatedly, NBA Youngboy singing sultry bars alongside Tyler, the Creator, or Playboi Carti and Trippie Redd dialing it back to SoundCloud’s early days—these artists elicited a reaction through innovation and experimentation. These are the best hip hop collaborations of the year.

Here are the nominees for HipHopDX’s Collaboration of the year.

Baby Keem and Kendrick Lamar’s movements prior to “Family Ties” were shrouded in mystery. Then “Family Ties” finally arrived as the lead single off Keem’s debut album, The Melodic Blue, helping to quell fans’ thirst. Kendrick and Keem’s chemistry couldn’t be closer if they were conjoined by the hip. Keem’s laidback, weird, off-kilter delivery makes way for Kendrick to open his horizons and experiment. K Dot opens his verse with, “smoking on your top fives tonight” with the cadence of an alien taunting his rivals. Then he gives us a reminder, bar for bar, why he’s one of the greatest to touch a mic. The cousin duo notch their collective place in history by creating one of the best hip hop collaborations this year.

Doja Cat is undeniable. Her transition from viral internet sensation to pop star is staggering. It appears that every song she touches, whether she’s singing or rapping, becomes an instant hit. Saweetie, on the other hand, has impressively built her brand through endorsements and television spots. Both Doja and Saweetie have become household names in 2021, so when “Best Friend” dropped, it became clear that these two were a match made in heaven. It’s easily one of the best hip hop collaborations by women this year. Every time J. Cole drops, the internet implodes. Cole’s popularity, skill, and love for Hip Hop are undeniable. On The Off Season, the follow up to 2018’s KOD, Cole seeks to prove the haters and naysayers wrong. His raps are sharp, as if he were sharpening his rhymes in a shed for the past three years. On “My Life” he enlists 21 Savage, and Morray to confront their personal demons. While 21 and Cole impress with their verses, Morray’s hook steals the show, warbling with messages of empowerment and hope.

Let’s be honest, the rollout for DONDA was a mess between its revisions and Ye’s cold war with Drake. But throughout each listening session, one sentiment remained constant — “Off the Grid” is one of the hardest Kanye West records in recent memory. The menacing drill-inspired production sees Kanye on the hook, Playboi Carti flexing the tattoos on his ribs, and Fivio Foreign delivering a career-defining verse. The unlikely collaboration is the second single off Tyler, the Creator’s excellent Call Me If You Get Lost. The production is soulful and cinematic, with Tyler impressively rapping through the fantasies he has for a crush. YoungBoy provides the softer vocal performance of the two, singing about love and the things that suck about it. The unlikely collab proves its worth as one of the best hip hop collaborations this year.

Wale made an impressive comeback with Folarin II, the sequel to his 2012 mixtape. On “Down South,” Wale taps in with Houston’s Maxo Kream, and Yella Beezy for a flip of the H-Town classic, “Still Tippin’”. Wale adds a DMV twist using uptempo snares that snap along the verses.

The fact that DOOM isn’t here anymore hurts. His legacy forever lives on through his influence and the music he left behind. One of the final verses he recorded was “Barcade” off of Atmosphere’s  and it’s vintage DOOM. Slug and Aesop don’t miss a beat either, but this is DOOM’s show: a gift from beyond.

Trippie Redd paid homage to the early SoundCloud days on his highly anticipated album Tripp At Knight. The lead single and the tape highlight is “Miss the Rage,” a raging anthem featuring Playboi Carti that dials back to 2016. Although its older, the song is still one of the best hip hop collaborations this year.