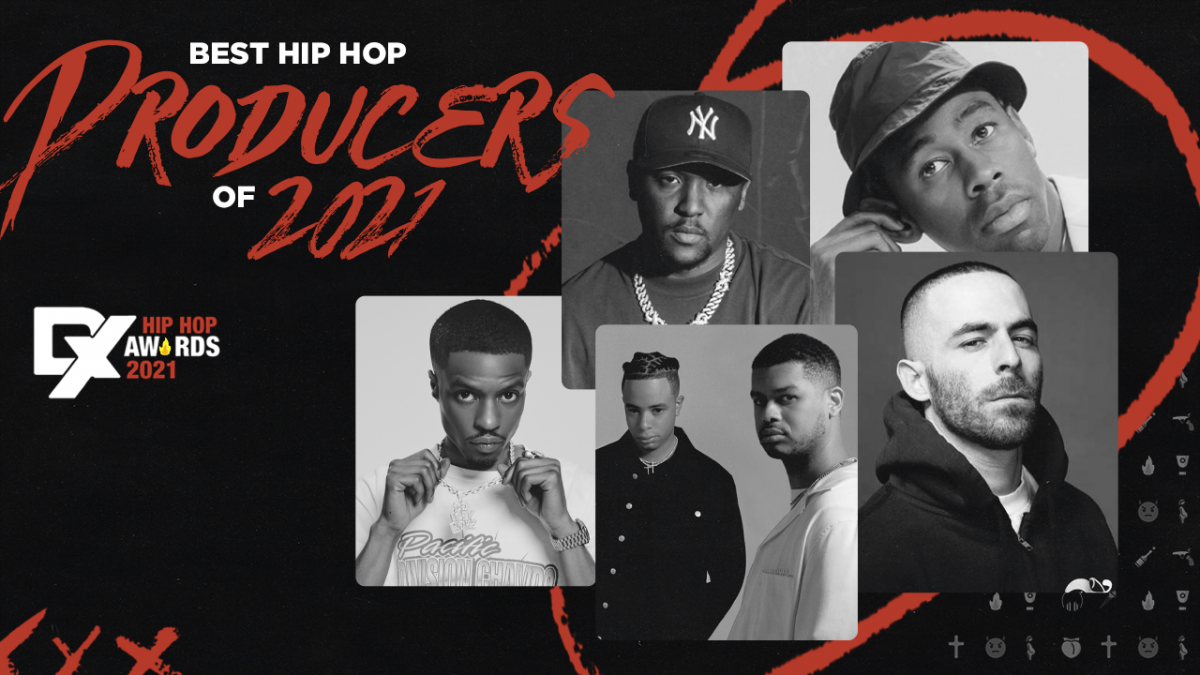 As always, when the year draws to a close, the DX staff converge to puff out their chests and furiously debate, critique and rank the year’s finest across the spectrum of the culture.

In a year filled with amazing production sonically developed by a diverse cast of veterans and bubbling newcomers, 2021 didn’t make the task of ranking producers an easy one. From upper echelon underground bangers to imminent Grammy-domination, the crop of nominees for HipHopDX’s 2021 Producer of the Year dominated charts, playlists and Hip Hop Twitter.

Ultimately, a handful of Hip Hop producers cheffed up more magic than the rest. Whether producing for themselves like Tyler, The Creator (who scored his second No. 1 album) or tackling full-length projects for artists—like Hit-Boy or Take a Daytrip—the most significant sonic architects this year refused to take their feet off the gas. Here are the Hip Hop Producers of the year.

Editor’s Note: All nominees are listed in alphabetical order.

The Best Hip Hop Producer of 2021 award goes to…

It’s been almost three decades since LA-born Alchemist was taken into the Soul Assassins fold and molded by the likes of DJ Muggs and DJ Lethal before eventually coming into his own. Alc has never remained stagnant. Following 2020, which saw him drop massive collaborative efforts with Boldy James, Conway The Machine and Freddie Gibbs, he crushed the last revolution around the sun, helming critically acclaimed efforts by Armand Hammer (Haram) and Boldy James (Bo Jackson).

For hardened heads, he also dropped some instrumental affairs, Carry The Fire and the sixth entry in his Rapper’s Best Friend series, as well as a compilation EP This Thing Of Ours—all via his Alc Records imprint. Several members of the DX editorial staff wanted Al to win this award last year. But through his dynamic collabs, superior consistency and impactful projects, Alchemist takes home the HipHopDX 2021 Producer of the Year in our tightest vote of the awards. Hit-Boy dominated 2020 with a level of versatility and pure heat that earned him HipHopDX’s 2020 Producer of the Year.

2021 saw him defend his crown with the same energy, helming the King’s Disease sequel with Nas, multiple placements on the Judas and the Black Messiah soundtrack and recently the What You Expect EP with Big Sean. With numerous Grammy nominations in place (one for Producer of the Year, Non-Classical)—as well as a new placement on Cordae and Lil Wayne’s “Sinister”—he doesn’t look to be easing off at all headed into 2022. Ending 2020 with a pair of placements on Playboi Carti’s Billboard 200-topping Whole Lotta Red, “Magnolia” producer Pi’erre Bourne did “wanna come out here” for another big 365 filled with Ws. For starters, he crafted The Life of Pi’erre 5, which he revealed in an interview with Complex would be the final entry in the popular series. The project spawned four singles, including “Sossboy 2 featuring Lil Uzi Vert, and peaked at number 35 on Billboard’s Hot 200.

On top of that, he put in a lot of work with members of his Sosshouse imprint, helming projects by Chavo (Chavo’s World 2), Sharc (47 Meters Down) and an eponymous project by Frazier Trill. “Mo Bamba” producers Take a DayTrip (Denzel Baptiste and David Biral) had themselves a fruitful 2020, working with artists like Dua Lipa and Juice Wrld—as well seven placements on Kid Cudi’s seventh studio album Man on the Moon III: The Chosen. But this year, they saw massive commercial success.

They scored ten credits on Lil Nas X’s Grammy-nominated debut LP Montero. These included “Montero (Call Me By My Name)” and “Industry Baby” featuring Jack Harlow—both of which topped Billboard’s Hot 100 and earned two and three platinum certifications, respectively. Yesterday’s price ain’t today’s price. They even dabbled with the R&B side with credits on serpentwithfeet’s gorgeous DEACON. Tyler, The Creator made a grand return to form with his follow-up to 2019’s Grammy Award-Winning Igor with Call Me If You Get Lost—his sixth self-produced foray and second number one album, debuting atop the Billboard Hot 200. Thirteen of the LP’s 16 songs charted on the Hot 100 with the YoungBoy Never Broke Again and Ty Dolla Sign featured “WusYaName” peaking in the top 20.

The LP is up for Best Rap Album at the 2022 Grammy Awards, so it remains to be seen if he can go two for two. Aside from his project, he also racked up two placements on the producer-heavy Temporary Highs in the Violet Skies album by Snoh Aalegra.

Philly beatmaker Maaly Raw trooped into the 2021 on the back of a pair of big placements on Playboi Carti’s Whole Lotta Red—“Teen X” “New N3on.” However, he made his biggest splash this year co-crafting Coi Leray’s Tik Tok famous, platinum-selling single “No More Parties” with Okaykhan—which also received remix treatment by Lil Durk.

Tony Seltzer added to an already stacked discography that includes production for names like Freedie Gibbs, Ski Mask The Slump God, WifiGAWD and Jay Critch (among others), with a handful of big drops in 2021. Aside from helming his own compilation Hey Tony, featuring the likes of Key!, Lucki, Mavi, Slimesito, Wiki and Lil Ugly Mane, he also produced the critically-acclaimed Key! LP The Alpha Jerk. He’s become one of the most in-demand Hip Hop Producers of the underground.

After five placements on Playboi Carti’s Whole Lotta Red, Outtatown racked up two credits on Gunna and Young Thug’s Billboard 200-topping ​​Slime Language 2—including “Ski” which peaked at 11 on Billboard’s Hot 100—and three on Trippie Redd’s Trip at Knight. He also had a hand in the Baby Keem and Kendrick Lamar collaboration “Family Ties.”