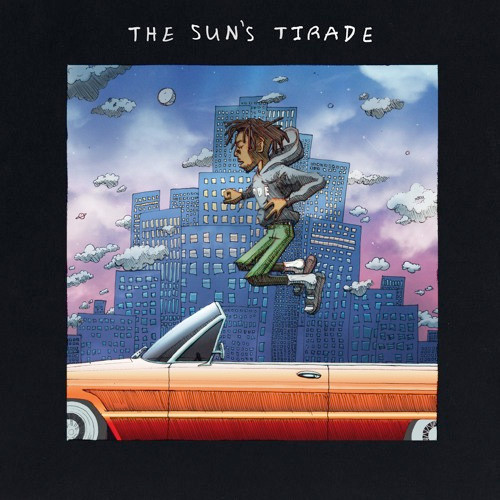 Leaving home is hard, but Isaiah Rashad is doing it — or at least he’s in the process of it. After his inaugural release, Cilvia Demo, on TDE in Winter 2014, Tennessee’s scrip-popping poet has laid low in a state of limbo much to the chagrin of his following. The Volunteer’s freshman effort showcased a well-versed repertoire mature for his age, and while Cilvia’s replay value rings true, Zay’s catalogue has suffered through the same waiting game as the rest of the Top Dawg breed. Marinating back and forth between Tennessee and his California rendezvous, Spottie’s withstood quite the quasi-exile from the TDE soundwaves aside from some buzz-worthy cuts over the past two years. Gripes and groans should subside, however, with Rashad’s shining new release, The Sun’s Tirade. Soaking up the pedigree of Top Dawg Entertainment’s culture is an opportunity any rapper would envy, and just as TDE has proven time and again, their latest release soothes the torment of its purgatory.

With Cilvia Demo as its prologue, Tirade divulges Zay’s conflicted tale to an even further degree. A vacillating narrative twisted by self-medication, California sunshine, and the nostalgia of home, Zay juxtaposes these shifting worlds with stories both bleak and redeeming. Prescribing Xanax and liquor to combat “two tears on the inside” and small city woes on “Stuck in the Mud (featuring SZA),” he speaks not only of himself but of so many others clawing to escape their swamp of troubles. But even stationed in the California glam, Rashad seemingly can’t escape his scarred memories of Chattanooga. “Rope (feat. SiR) // rosegold” strategically adds insult to the injury of Zay’s absent father, and after admitting that he’s burnt out on “AA,” Spottie goes on to reminisce on “havin’ nothin’ but my momma and some Starter on my muthafuckin’ birthday,” a recollection among a host of others calling him to the opportunities of a bigger world.

A spawn of this hyper-aware generation, Shad meets fire with fire on his own tirade, acknowledging the noise of the streets and interwebs through a series of satirical skits with Top Dawg co-president, Dave Free. “I don’t understand this process, dog,” Free laments over the album’s intro “where u at?” “Everybody was bumpin’ yo last shit, you don’t wanna get your next shit out? You don’t care? You got until Friday, bro,” he says, mocking the grievances of TDE faithful. Later on he goes as far to demand Zay to “Find a motherfuckin’ topic,” chalking him up as just another one of those “complicated ass young motherfuckers” that populate Hip Hop’s burgeoning future. Surely, both Rashad’s path and his music are marred by complication but quips from the peanut gallery present little significance in comparison to the dichotomic tug of war inside his mental.

Luckily for Rashad, it’s the bigger world this TDE dreadhead was bred for. He swears to his mother over the piano of “Park” that “I knew I was ‘bout it, way before venue was crowded,” subsequently proving his worth with performances like “Free Lunch,” “Tity and Dolla (with Hugh Augustine and Jay Rock),” and by going bar for bar with K. Dot on their souled out collab, “What’s Wrong.” And if it feels like he’s “running in circles,” that’s because he is. Of all the drugs Zay partakes in, stardom and money are his strongest vices and they occur at the expense of his loved ones. He confesses to his girl on the kickback poetry of “Silk Da Shocka” that he “chose the world in the end,” and admits on “Dress Like Rappers” that he didn’t have enough time to visit his daughter while he was home before having to head back to Cali. Still scaling to new heights, Zay’s greatest conflict at this point isn’t his sporadic release cycle, it’s finding his equilibrium between fame and fam.

This balancing act unfurls seamlessly across the album’s duration, and even through enduring obstacles, Tirade is a refined exercise in Spottie’s advancement as an artist. Back and better than ever are the spaced-out blues he demonstrated on Cilvia Demo, and even if Shad’s slurred bars suffer from hints of attention deficit, he scales scat-riddled verses more smoother than any TDE artist not named Cornrow Kenny. “I used to could’ve, would’ve, should’ve,” he says on the album’s outro “by george (outro),” keywords being “used to.” With Tirade, it’s irrefutable that Rashad is all aboard his fated train to rap relevance. He’s saddled with baggage from back home, but he’s also supplied with a pen and a set of blueprints left behind by Hip Hop forefathers. So while the sun’s criticism beats down on him at the station, Zay knows his odyssey will be one of pain but equally fruitful returns.