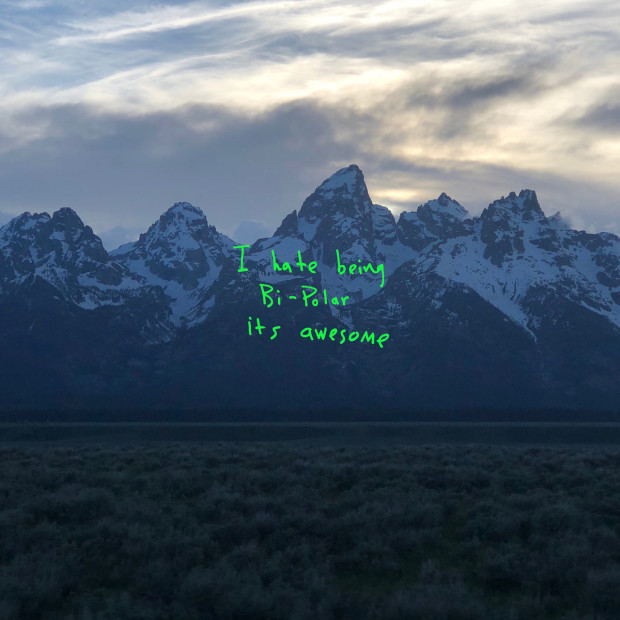 For the first time in his storied career — a career that has catapulted his discography into the holy grail of Hip Hop solo acts — Mr. Kanye West does not have the answers.

His semi self-titled ye masterfully arrives after the internet firestorm the 40-year-old maestro ignited through co-signing Donald Trump and other right-wing trolls.

But when it comes to the moment of truth for an explanation, the 23-minute album glosses over the ongoing narrative of his mental illness and unscripted 400 Years A Slave feature, among other erratic behavior. The usual crop of composers, such as Mike Dean, Benny Blanco, Che Pope and more, all combine for a symphonic auditory trek that’s spliced with pharmaceutical name drops and insecurity masking as invulnerability.

Seeking “the old Kanye” on a new Kanye album is an unfair — and unrealistic — expectation. Both man and artist have the God-given right to grow, evolve and even become products of their own success. But ye as a whole provides a rather deflating experience from an artist who’s enabled his GOAT status by not being naive to the ongoing narrative.

A bouncy track like “All Mine” is absolutely perfect for today’s club circuit, complete with snazzy Auto-Tuned gibberish from Valee and Ty Dolla Sign and instant sing-a-long lyrics from Kanye. But it’s ultimately a fleeting time-waster given the album’s brevity. An excuse to let the people eat cake instead of giving them the food for thought they so unapologetically demand from their Lord Yeezus.

Kanye has no issues in mentioning his Black Brothers in Kardashian Khrist (“Sometimes, you gotta bag the boss up/ I call that taking Corey Gambles” and “All these thots on Christian Mingle/ Almost what got Tristan [Thompson] single” he cracks on “All Mine”) but when it comes to addressing his own controversy, well, *Kanye shrug*.

“They say, ‘Build your own’ — I said, ‘How, Sway?’/ I said, ‘Slavery a choice’ — they said, ‘How, ‘Ye?’/ Just imagine if they caught me on a wild day/ Now I’m on 50 blogs gettin’ 50 calls,” he begins on “Wouldn’t Leave,” before revealing that Kim Kardashian severely struggled with his unfiltered thoughts to the point it opened the conversation for separation talks.

And that’s where the anticipated discernment reaches its peak. There’s no elaboration on why he feels Black people could benefit from being Republicans. There’s no open call to heal the millions who suffer from bipolar disorder or detailing how he was able to avoid complete immolation.

Even Kanye West, who has the ability to emote pop melodies out of Hip Hop arguably better than anyone who ever identified as a rapper, can’t cover such a weighty subject in just 23 minutes.

“Yikes,” the aggressive true opener of the album, finds a triumphant Kanye fully draped in his cloak while proclaiming his mental illness is a “superpower” and embracing his prescriptions with lines like “Tweakin’, tweakin’ off that 2CB, huh?/ Is he gon’ make it?/ TBD, huh thought I was gon’ run, DMC, huh?/ I done died and lived again on DMT, huh” overtop an echoing ad-lib and pummeling bass knocks.

On May 21, a North Carolina man sat down with his family at a restaurant, only to return to his vehicle and drive into the venue, killing his daughter and daughter-in-law. On the dawn of the album, the spoken word “I Thought About Killing You” finds a poetic Kanye revealing homicidal thoughts (largely hinted to be aimed at Kim Kardashian throughout the project) before shifting gears to stop-and-go turn-up flow to appease the kids.

Conveniently using his “superpower” to morph weighty subjects into headnodders is a luxury Kanye long abandoned when he ensured that he would be a legend circa the time executives wouldn’t even listen to his demo. It’s a Peter Parker-sized responsibility Kanye must own up to and has yet to prove he’s capable of, as evidenced by his TMZ interview, where he failed to articulate his slavery streams of unconsciousness.

Sure the heavenly feel of “No Mistakes” harkens back to his gospel soul days, 070 Shake’s passionate cameo on “Ghost Town” unveils a star-in-the-making and honest thoughts about raising North and Chicago on the serene album anchor “Violent Crimes” make for a alluring sonic experience.

But ye merely excels in surface-scratching instead of the transcendent territories that spawned the Kanye everyone loved. Sometimes less does not equate to more.