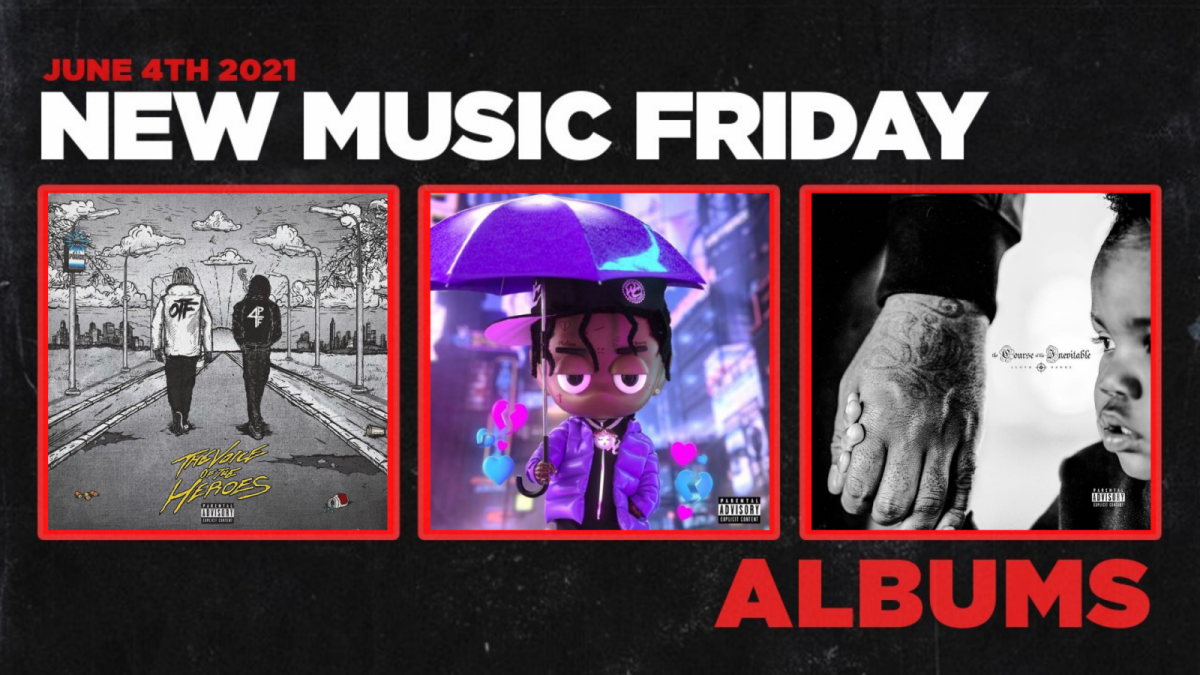 The first week of June may have been relatively quiet compared to May’s onslaught of high-profile releases, but there’s still plenty of music to dive into. To start off today’s New Music Friday, the current King of Atlanta, Lil Baby, linked with Chicago’s Lil Durk, releasing their hotly anticipated joint album The Voice Of The Heroes.

Brooklyn showed up strong this week, with 2021 HipHopDX Rising Star Sleep Hallow dropping Still Sleep?, his first project since 2020’s breakout Sleepy Hallow Presents: Sleepy For President. There’s something for everyone though, as older rap heads will thrilled to hear that Lloyd Banks of G-Unit fame dropped The Course Of The Inevitable.

With new albums from Smoke DZA, Peter Rosenberg, TyFontaine and more, this Friday may have brought fewer albums, but the albums it brought are gems. Keep reading for our complete list of coverage: we’ll see you next week.

You’d be hard pressed to find two artists who have a better CV over the past two years than Lil Baby and Lil Durk. Last year brought the epic My Turn from Baby and the heartfelt, blood-soaked The Voice from Durk. In a meeting of rap titans, the two have combined forces for Voice Of The Heroes, a full-length joint album. The duo teased VOTH with a passionate and melodic eponymous single and a corresponding music video earlier this week.

The Only The Family and 4 Pockets Full bosses have previously collaborated many times, most notably on Durk’s “3 Headed Goat” which also featured Polo G, and most recently on DJ Khaled’s “EVERY CHANCE I GET” from this year’s Khaled Khaled. Durk and Baby have been putting numbers on the board all season: now it’s time for the All-Star Game.

The Course Of The Inevitable – Lloyd Banks

Lloyd Banks has been a Hip Hop staple for almost two decades. From his work on the seminal 2003 G-Unit album Beg For Mercy to his debut 2004 solo project The Hunger For More, Banks is an undisputed Hip Hop champion. The Queens MC spars with the beat each time he approaches the microphone. He bobs and weaves with an agile flow, but one thing is for certain: Banks will always land the last punch.

Banks’ influence and legacy have already been solidified: he has nothing to prove. Still, over the eighteen tracks of The Course Of The Inevitable, Banks’ latest project, its thrilling to see a veteran MC maneuver with such nimble agility. With a loaded cast of features from Freddie Gibbs to Benny The Butcher, TCOTI showcases exactly why Banks has been a household name for nearly twenty years.

Sleepy Hallow has been one of Brooklyn Drill’s leading figures for years, but it was last year when he burst into the greater Hip Hop ecosystem through Sleepy Hallow Presents: Sleepy For President, led by “Deep End Freestyle” and the Sheff G assisted “Molly,” two tracks which spread like wildfire on TikTok and other social media platforms. Since then, the rapper dropped a few singles, but was largely quiet until this week when he dropped Still Sleep?.

TyFontaine is from the DMV, but we’re pretty sure he’s actually from whichever strange, mystical galaxy birthed Playboi Carti and Trippie Redd. The Internet Money rapper just dropped Ascension, his first full-length album since last year’s 1800, a thirteen-track project loaded with dynamic vocals and engulfing production. Ty’s melodic and malleable cadence bends around beats that could have served as the soundtrack of 2001: A Space Odyssey if Stanley Kubrick had heard trap music.

Ty’s only featured verse on Ascension is SoFaygo’s colossal hook on “Run It Up,” one of the album’s highest peaks. If Ty’s not on your radar yet, this is a convincing argument of why he should be added.

Smoke DZA’s career began in the Blog Era, but he’s one of the artists to successfully break through and adapt to Hip Hop’s changing landscape. Earlier this month the New York rapper released “Big Steppa” the lead single from The Hustler’s Catalog 2 which featured Griselda’s Westside Gunn and a fellow Blog Era alum, Curren$y. THC 2, the follow-up to DZA’s 2011 mixtape, is now here, carrying with it ten kush-heavy tracks, features from Dave East, Benny The Butcher and more, not to mention a few hits from his partner-in-crime, Harry Fraud.

The best way to enjoy DZA’s latest is on a beach-side lawn chair, puffing at your finest herb. But if you’re in a rush, be sure to check hit play on the essential tracks: “No Regrets” with Dom Kennedy and “Ramadan” with Benny and Nym Lo.

Peter Rosenberg may not a rapper, but he’s an undeniable force in the world of Hip Hop. The iconic DJ and Hot97 personality already has two mixtapes under his belt in 2011’s What’s Poppin’ Vol. 1 and its sequel, The New York Renaissance in 2013. Now Hip Hop’s renaissance man is back with his third tape, Real Late.

It wouldn’t be a Rosenberg mixtape without an assembly of the best rappers the East Coast to offer. Real Late didn’t disappoint on that front, as the features range from iconic artists such as Wu-Tang Clan and Styles P to the best of the new school represented by Freddie Gibbs and Westside Gunn. Real Late just has us missing cassette tapes and late night drives through the Five Boroughs.

Bop Menaxe earned one of this week’s Honorable Mentions for his latest effort Different Design, as did Tech N9ne and Hu$h for their new mixtape BLIGHT.