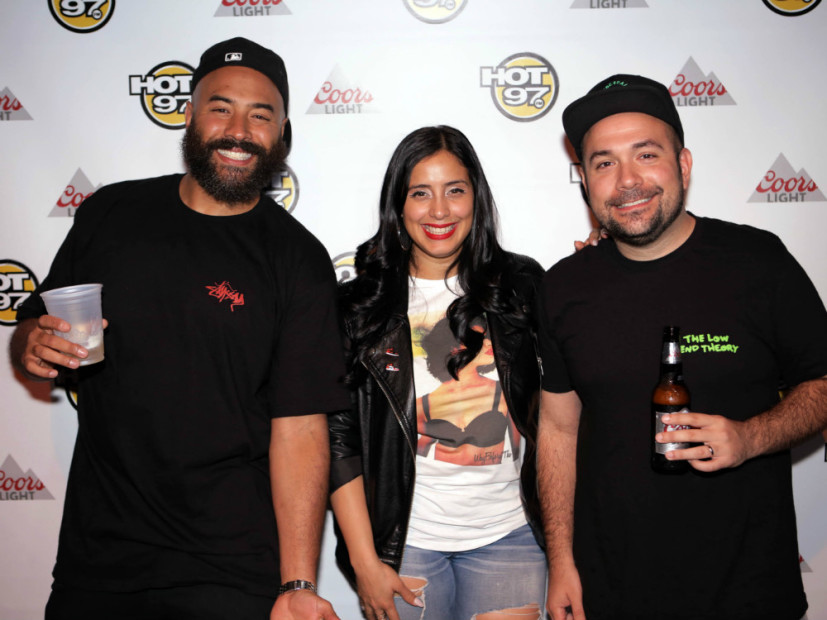 New York, NY – Summer Jam is always one of the biggest shows in Hip Hop every year, and a trio of Hot 97’s on-air personalities has varying opinions about where the highlights will be at this year’s show.

The ‘Ebro In The Morning’ crew – Ebro, Peter Rosenberg, and Laura Stylez – spoke to HipHopDX about their expectations for this year’s Summer Jam, and highlights from previous years.

Younger artists at Summer Jam have a chance to take full advantage of one of Hip Hop’s biggest stages of the year. Ebro said he thinks Chance The Rapper, who is enjoying positive reception for his mixtape Coloring Book, has a shot at being one of the evening’s most memorable performers.

“There’s people who come to Summer Jam who may not know that much about Chance because he hasn’t made a big radio single, so I think Chance has an opportunity to really win people over,” he said.

He noted that the A$AP Mob could also make a splash. He claims A$AP Ferg has big potential to make an impact with his Always Strive and Prosper album and he is interested to hear what A$AP Rocky has up his sleeve.

“I think A$AP Ferg is probably one of the most underestimated artists in New York, in my opinion,” Ebro continues. “Just as far as who he collaborates with, and songs on his album, his rhyming abilities and brand. I feel like people really take Ferg for granted, so he has a big opportunity. Rocky isn’t on an album cycle but I know he’s gearing up for another album pretty soon.”

“This timing could be great for Ferg if these records continue to build,” Rosenberg added. “If ‘New Level’ gets bigger and ‘Strive’ starts to move, then he could have a really nice moment there.”

Laura Stylez said she was looking forward to seeing Dave East and Justine Skye, two young New York artists who likely have wanted to perform at Summer Jam for their whole lives.

“It’s a special moment for the artists themselves, so that’s going to be good to watch,” she said.

When asked about Desiigner, whose hit “Panda” has become the number one song in the country, the hosts said they were looking forward to hearing other songs from the G.O.O.D. Music signee.

“I’m expecting to hear some music we haven’t heard before, because I’m assuming he’s not going to get up there and do just one song,” Ebro said. “They have a chance to win people over by playing some other records or performing some other way.”

Desiigner may also jump into the G.O.O.D. Music performance, since “Panda” was reworked for Kanye West’s The Life Of Pablo. In 2015, the label seemed to take the divide and conquer approach, as Big Sean enjoyed a breakthrough album with Dark Sky Paradise and Pusha T closed out the year with Darkest Before Dawn. Summer Jam 2016 should offer a renewed look at the crew, which is under new leadership with Pusha T’s recent hire as label president.

“It’ll be interesting to see how they handle that and how much of a unit they seem to be, because it has been a minute since we’ve seen that, and if we end up getting Kanye West to come out. You know that’s his Grammy family right there if you will,” Rosenberg said. “Desiigner’s on the Festival Stage, but it would be shocking if he didn’t come on the main stage to do ‘Panda’ with everyone. And then if he does ‘Panda,’ doesn’t he really have to do ‘Pt. 2’ with Kanye West?”

Performances start at 6:30 p.m. on Sunday, June 5 at MetLife Stadium.

The hosts also shared some of their favorite Summer Jam moments from over the years. Rosenberg said that Michael Jackson’s surprise appearance at Jay Z‘s set in 2001 was “iconic and so obviously untouchable,” while Ebro preferred the legendary beat battle between Kanye West and Swizz Beatz in 2007.

“A lot of times artists get really big, and they forget that some of the most fun you can have with fans is to keep it simple with Hip Hop,” Ebro said. “What’s more Hip Hop than two producer/artists playing the songs they’ve done for other people as well as their own songs in front of the crowd? And being like, ‘nah, nah but what about this one?’ ‘Oh, OK, OK,’ and just going back and forth.”

Laura Stylez agreed with Ebro’s choice, while also admitting that she enjoyed behind the scenes moments – seeing Jay Z and Beyonce backstage, and seeing Rihanna watch Drake while he performed with Nicki Minaj and Lil Wayne.

Ebro was also asked if he has spoken to podcaster Taxstone since their most recent spat on social media. The two have gone at each other for years, but in recent weeks, Taxstone insulted the mother of Ebro’s children, leading Ebro to email Viacom to have Taxstone suspended from MTV’s “Uncommon Sense.”

“You know you can’t talk about my wife on IG. Yeah I’m a boss man, I call my other boss friends and you get suspended. You think I’m going to step down out of my ivory tower and talk to podcast niggas?” Ebro said.

“As big as that nigga is, that nigga still don’t got 50,000 followers. So he must not be that important. He’s as important as dirty scrub niggas who like to hear from other unemployed niggas talking about being unemployed.”