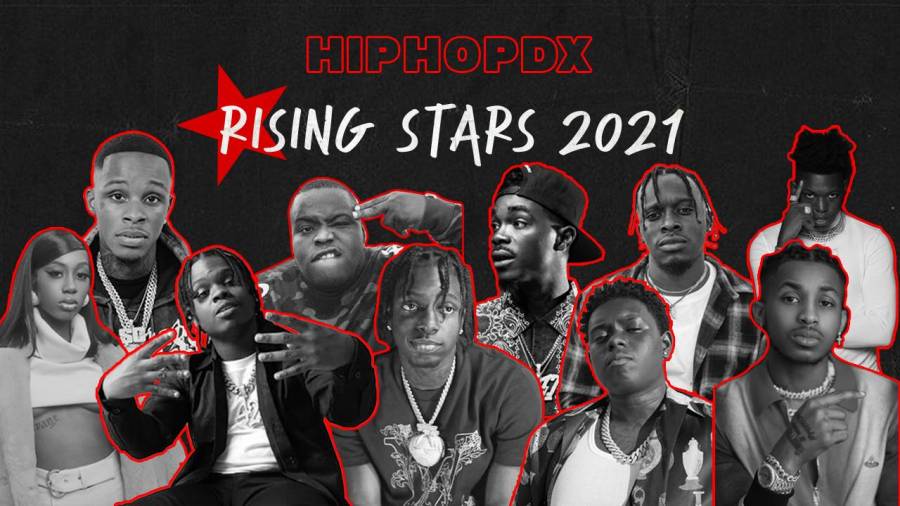 With each passing year, new rappers have proven to be the true lifeblood of rap music. Whether their energy is referred to as “drip,” “swag” or a trendier lightning bolt in between, always count on the younger generation to influence the game’s top rappers and takes cues from the most lively creative source around.

So with much excitement, HipHopDX is proud to introduce our Rising Stars 2021. Over the past year, we have monitored these 10 new artists and determined their trajectory through their presence and style. Most importantly, their music has many qualities worth revering down the line. You may have seen many of our artists on the 2021 XXL Freshman class cover as well, but these picks were released back in February.

So what is a HipHopDX Rising Star, exactly? A Rising Star is a burgeoning talent we pinpoint within the year before or after their initial introduction and rollout of new rap music. These are the artists we feel have the ideal total package in terms of their musical sound, stage presence and genuine personalities.

Over the course of the year, we will highlight their career progression through special and exclusive features, interviews, playlist love and other indulgent surprises.

There will also be a Weekly Rising Stars column that will chronicle the exciting career turns this year will undoubtedly bring. Much like our past new rappers’ iterations of Rising Stars (our 2018 SXSW set showcased the talents of Saweetie, Jay Park, Tylah Yahweh and last year’s Hip Hop Awards highlighted the achievements of Jack Harlow, Roddy Ricch and the late Pop Smoke), the Rising Stars 2021 will undoubtedly set a standard for vibrant energy for Hip Hop this year.

Read more about each artist’s 2021 so far and check back weekly for updates on our HipHopDX Rising Stars picks!

[This post has been updated. The following was originally published on February 5, 2021.] Read updates below.

From aligning his goals with those of Yo Gotti and Lil Baby’s for their CMG and 4PF imprints, respectively, to casually beasting Billboard hit singles such as “We Paid” and “Grace,” 42 Dugg carries himself like a rap vet who disregards any rookie hazing. Solidifying his name as a lyrical, fashion and op killa, HipHopDX is proud to introduce 42 Dugg as a 2021 Rising Star.

Flo Milli’s colorfully stratified existential persona and bouncy, punchline flinging raps make her stand out greatly amongst competition and we can guarantee her trajectory is limitless!

It’s not a strange thing to hear a new rapper say they’re going to be the next big thing in a few years. Some have succeeded in accomplishing those lofty claims, while others have missed the mark, but DDG is on pace to reach that goal. As it was made clear in his conversation with HipHopDX, DDG doesn’t keep all his eggs in one basket.

Most of Hip Hop’s brightest stars commonly exist at an apex of originality, authenticity and influence. 22-year-old MC Sheff G is one such artist, credited with refocusing the sound of Brooklyn street music. He is considered one of the crucial voices that gave life to the borough’s drill scene: capturing his city’s energy without compromise.

Influenced by the likes Kanye West, Pharrell Williams, the late great Nate Dogg and more, Los Angeles multi-talent Blxst has made a name for himself patenting his sonically layered Hip Hop bops and as of today, he is forever a HipHopDX Rising Star 2021!

Atlanta has been the Hip Hop capital for over 20 years and continues to produce talent daily. For a new rapper trying to make it out of the neighboring regions, it’s an even more difficult task trying to stand out in such a crowded scene. But Gucci’s latest signee, Foogiano, has managed to figure it out by being himself and has all the makings of a real Hip Hop star, and because of that, he is one of HipHopDX’s 2021 Rising Stars!

Alabama had a lot to offer the wide world of Hip Hop in 2020 from Grammy-nominated MC Chika To HipHopDX Rising Star 2021 Flo Milli’s impressive campaign.

With major co-signs from Louisiana legend Boosie Badazz and OVO monolith Drake, Yung Bleu is without a doubt one of the most hyped upcoming artists hailing from Alabama to don the crowning title of HipHopDX’s Rising Star 2021.

With all eyes on the Brooklyn drill scene as the en vogue sound dominating Hip Hop that everyone wants a piece of, it’s time for Sleepy Hallow to make the quantum leap and snatch a seat at the table in 2021, making him a prime candidate for the HipHopDX Rising Stars 2021 class!

Armed with his first RIAA gold certification for “Love Cycle” featuring Summer Walker and a monster co-sign from his South Coast Music Group labelmate DaBaby, the 21-year-old Toosii is ready to fully embrace his new role as one of HipHopDX’s 2021 Rising Stars!

Imagine being an earnest, hardworking — yet relatively unknown Hip Hop artist from a relatively unknown region.   You decide to put out your most focused single to date, go about your day and all of a sudden, the game’s hottest rappers — legends even — are showering you with praise?

Such is life for Morae Ruffin a.k.a. Morray, our 10th and final HipHopDX Rising Star 2021!

Check out our weekly Updates to find out what our Rising Stars have been up to: