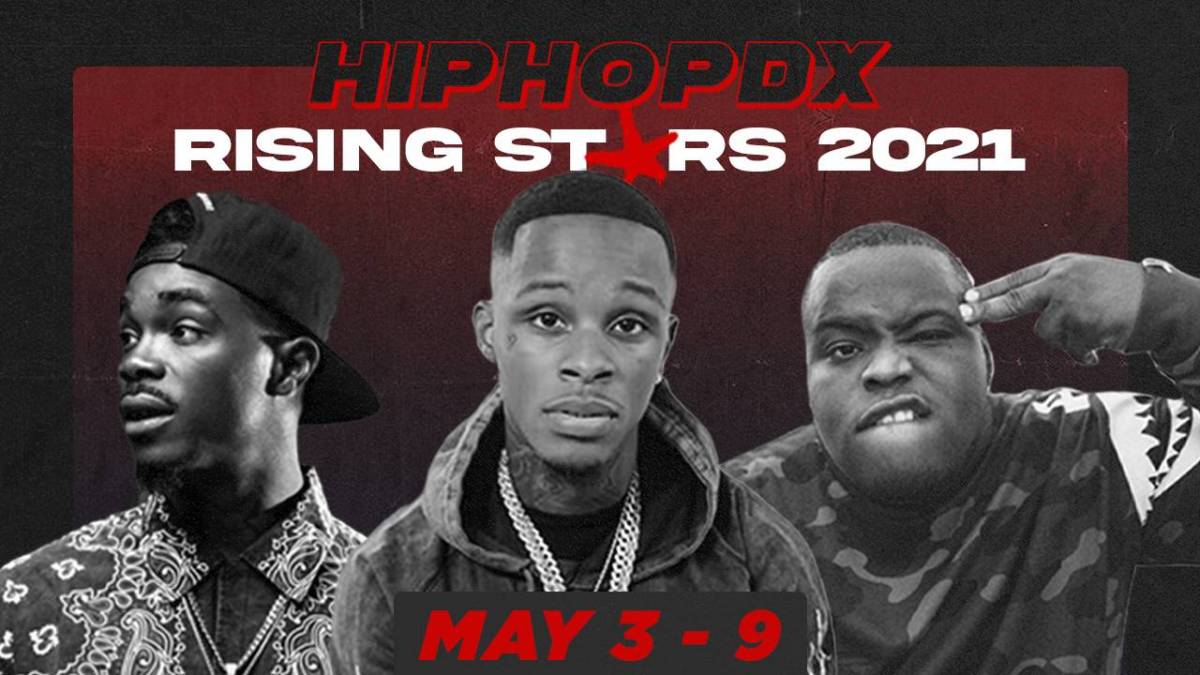 This past week has been life-changing for some of the 2021 HipHopDX Rising Stars.

While we may have received discouraging news about Foogiano, which may jeopardize his rising stardom, Rising Stars Morray and Toosii have been putting in serious work. One of the two earned a top spot on Apple’s Top Album chart, while the other performed for a jam-packed crowd in their home state.

The Rising Stars continue to show the game why they, in fact, may be what’s missing in today’s Hip Hop culture. DX may have even encouraged two of the Rising Stars to make some noise together this week – who knows?

In March, HipHopDX announced 2021 HipHopDX Rising Star Foogiano had been arrested in Memphis after being on the “run” since last December. The Georgia native was accused of burning off his court-mandated ankle monitor ordered from a previous firearm charge. Big Foo was then booked into Shelby County Jail and branded a “fugitive from justice.”

When the alleged ankle monitor-burning incident happened several months ago, Foogiano was accused of “hiding out” from the authorities, although he hasn’t actually been laying low. The “First Day In L.A.” rapper collaborated with fellow 1017 label mate Pooh Shiesty in November 2020, while also documenting his first visit to the City of Angels. Meanwhile, his Instagram account has continued to be active with daily postings ever since the arrest.

Music executive and Authentic Empire CEO Boomman stated in a tweet Foogiano has received a five-year prison sentence in the county in which he was a fugitive.

“Green County Just Gave @FoogianoDaMayor 5 years for cutting an ankle monitor for a gun charge that wasn’t his and was claimed by some one else this is beyond crazy,” he wrote. “we have to do something about this!”

Green County Just Gave @FoogianoDaMayor 5 years for cutting an ankle monitor for a gun charge that wasn’t his and was claimed by some one else this is beyond crazy ? we have to do something about this!

If anyone would like to write Foogiano and send him positive vibes and encouragement for the next five years during his incarceration, write him at this address:

Last month, DX announced Foo’s new visual for “The Plan Pt. 2,” which sequels his 2020 standout Gutta Baby track “The Plan” continuing the storyline of an apparent robbery gone wrong. Foogiano’s team also wrote in an Instagram caption under a picture of Foo and his children “new music is coming soon too.”

2021 HipHopDX Rising Star Toosii has continued to be active as he pushes his newly-released album Thank You For Believing, which dropped on Friday, May 7. The Syracuse-bred artist finally revealed his tracklist, which includes features from Mulatto, DaBaby and Key Glock.

To build anticipation for the project, the “Love Cycle” singer and rapper just released music videos for “What It Cost” and “Back Together.” Both music videos have amassed over 2.5 million YouTube views. Now, Toosii is back with DaBaby for the “Shop” music video.

The visual comes just in time, as Toosii’s Thank You For Believing hits No.5 on Apple’s Top Albums chart, only hours following its release.

The video includes a dreadlocked DaBaby sporting a “Canadian Tuxedo” as he raps in-front of motorbikes performing donuts around him. Toosii shares a club scene with a leading lady where he ends up knocking out a dude that has an apparent history with her.

Elsewhere in the video, a few choreographed dance scenes break out amidst cutting to Toosii performing in a vacated hallway. Directed by Edgar Esteves, the video ends with Toosii and the lead-girl watching the motorcycles perform on a rooftop.

Check out the tracklist to Thank You For Believing and watch the video for “Shop” below.

During an On The Record interview with Genius’ Rob Markman, 2021 HipHopDX Rising Star Morray shared how his hit single “Quicksand” quickly changed his and his family’s life and also how he doesn’t care about any allegations pointing to the idea of him being an industry plant.

The Fayetteville artist’s single “Quicksand” amassed over 50 million views on YouTube, which helped lead him to an Interscope Records deal just a few weeks ago. The 28-year-old artist has already earned the support of J. Cole, DaBaby and JAY-Z himself.

Morray’s unexpected rise to stardom has caused conversation on how he got to where he is so quickly. All in all, his hard work and actual rap skills must be acknowledged, as he’s one of the most polished new artists out right now.

When asked about how he felt about critics such as DJ Akademiks alleging he was an “industry plant,” Morray responded, “If you see my life, and you hear my music, you know who I am. You know the truth. You feel me? Like I’m not going to debate a n-gga for having opinions. Who cares?

“I’m going to keep it a band. That shit got me hella fans. That got me hella more love. People want to know if I am now, so it’s bringing me more attention. So he did his job. You feel me?”

Morray recently performed in his home state, where he packed out the show performing some songs from his latest mixtape Street Sermons, which is out now on all streaming platforms. He also blessed our timelines with a fiery-freestyle video of him spitting bars to a beat playing from a distant car.

Watch the full interview above to hear more

Yung Bleu says he wants to shoot video in Africa with Davido for their teased new single (listen to the snippet here).

Sheff G and Sleepy Hallow are two of 10 up-and-coming rappers named to HipHopDX’s 2021 Rising Stars! For more info on Sheff G, Sleepy Hallow and the rest of the talented Hip Hop bunch, read about them here.