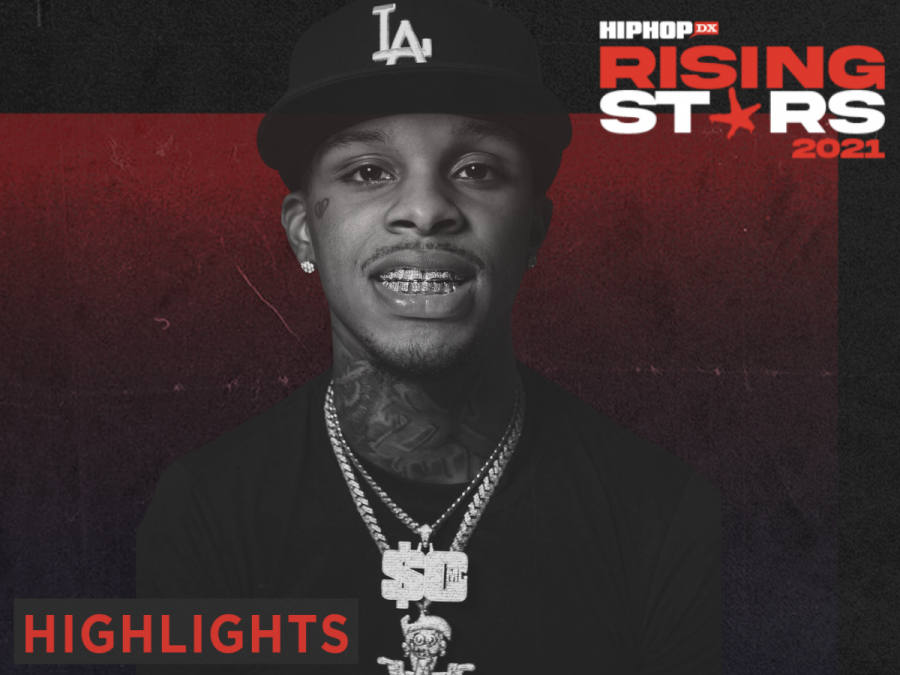 Coming off a Rolling Loud Miami high, a few of the 2021 HipHopDX Rising Stars have gotten right back to work.

As one of the most consistent artists out of the bunch, 2021 HipHopDX Rising Star Toosii has decided to hit fans with a deluxe album Thank You For Believing: The Manifestation.

It seems Toosii has decided to step into the drill scene with “Spin Music” featuring Fivio, as he dropped the music video Friday (July 30) to kick off the album.

Directed by Jeremi Thi Lam a.k.a. JLShotThat— also known for a host of music videos in the Brooklyn-drill scene ranging from Pop Smoke to Lil Tay — has shown off his Guerrilla style in this one, too.

The “Spin Music” video is saturated with ATV’s, dirt bikes, and flashy cars as the duo exchange braggadocios bars about getting any woman they want, not caring about what anyone thinks of them, and of course how much money they are getting now. We can also give kudos to visual effects artists Ritson and Aylo for the dope graphics seen throughout the music video.

Thank You For Believing: The Manifestation follows a minor Twitter fiasco on Wednesday (July 28) involving Toosii tweeting this generation is “soft” and “would’ve cancel Bernie Mac” if he were alive.

The timing of Toosii’s tweet could be assumed to be in reference to the backlash his labelmate DaBaby is receiving after making homophobic and insensitive comments about the HIV and AIDS community, as well as the LGBTQ+ communities.

“The real ‘soft’ ones are y’all like y’all wanna say whatever the fuck y’all want without consequences,” a fan replied in a tweet which brought on some confusion to Toosii.

However, in the same week Toosii also projected himself to be “the biggest rap artist in the world” one day.

After seeing what’a happening to DaBaby for voicing his own opinions about sensitive matters, it’s best Toosii does like Chris Brown said to do when it comes to their music and “shut the f-ck up” about topics that can cancel their careers before they even blossom.

In the meantime, stream Thank You For Believing: The Manifestation below.

2021 HipHopDX Rising Star 42 Dugg has spent this week defending a video that surfaced of him kissing his son’s neck in a way that many viewed as unusual.

Twitter was in a frenzy when Dugg posted several photos and videos of him and his son celebrating his birthday on Friday (July 30). The “We Paid” rapper posted a carousel of memories on IG with the caption, “Happy birthday again younging loveee you too the moon in backkkkkkkk TURNT UP 3.”

However, there was one video that caught everyone’s attention and sent them through the roof.

With events happening recently surrounding insensitivity to the LGBTQ+ community, such as what DaBaby said at Rolling Loud Miami, it is quite expected that almost anything can make social media go crazy right now.

42 Dugg responded to the uproar with a since-deleted IG post saying, “Suck my dick you gay biotches. Ain’t nobody going for that gay ass hoe ass shit y’all on, y’all quit to get on some GAY BITCH ASS BUT WHEN AS N-GGAS AND CALL SOMEBODY OUT WE HOMOPHOBIC.”

Social media responded to Dugg’s post with trolling, threatening to even call Child Protective Services on him.

Check out how Twitter responded to Dugg showing love to his son for his birthday through a few memes below.

42 dugg responding to gay allegations & bringing up lil nas instead of responding to the hickey giving to his son.. y’all see the problem here?😂 pic.twitter.com/qzOHMDdyKX

Meet and greet DDG while he’s on tour with Kevin Gates this September. (Get tickets here.)

To complete the subscription process, please click the link in the email we just sent you.
Joining Newsletter
Subscribe
×