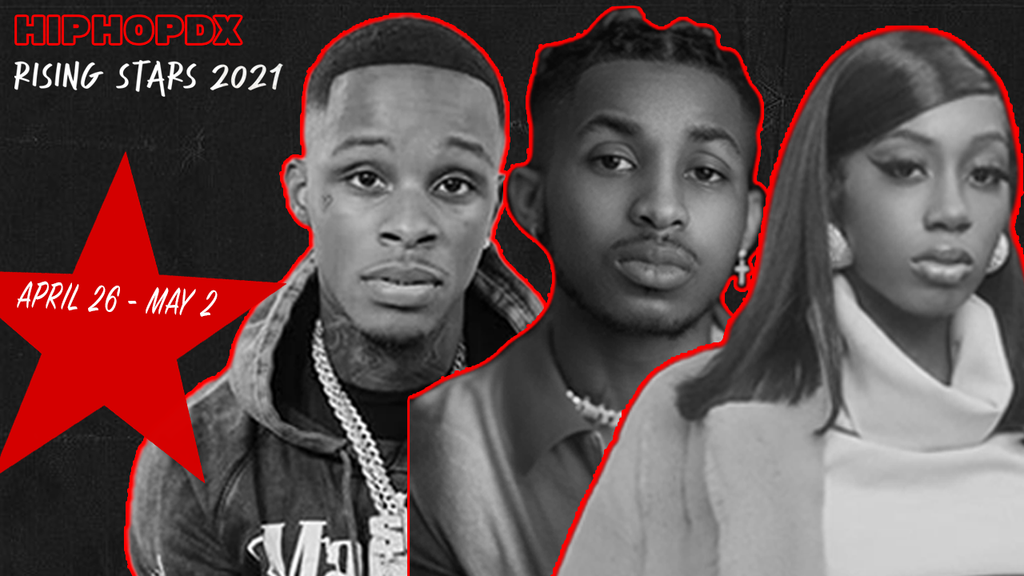 As some of HipHopDX’s 2021 Rising Stars get closer to their Rolling Loud sets and prepare for project-releasings, a few of the stars have remained pretty silent on social media and when it comes to their music cough, cough, Sheff G. However, the Rising Stars still have eight months to continue to show the world their star-power, and why they are the future of Hip Hop.

Let’s just hope the “beef” between some of our Rising Stars discontinues, and they continue to focus on polishing their crafts.

“Cover Girl Milli Is What They Call Me!”

The queen of Mobile, Alabama; also 2021 HipHopDX Rising Star, Flo Milli, took to her Instagram on Thursday (April 29) to announce her magazine cover-story with Brick magazine.

“COVER GIRL MILLI IS WHAT THEY CALL ME,” an excited Flo wrote in all caps. She also followed up with two photographs from the photoshoot captioned with, “HO … I’M HERE TO STAY,” and “2 cool for you.”

The 21-year-old rapstress who makes anthems like “Weak” for women to boss-up to, was included in Brick Magazine’s “Brick 10” special-edition issue with their “10 iconic cover stars.” The “Brick 10″ special-edition also includes Grand Master Flash, Lil Baby, Lil Durk, Chika, and Coi Leray amongst others.

DX can vouch that Flo Milli does has iconic value with her capability to match and sometimes top, any artist’s flow that she joins on a track, as well as her ability to make any verse of hers go viral. She is especially known for her viral-verse on the West Palm Beach rapper $NOT’s 2020 hit “Mean” with her ear-worm-worthy rhymes, “Cause I got a small waist, pretty face with a big bank (You mad, duh)/Look how you hatin’ on a bitch and you my momma age (Hah, wow),” which took TikTok influencers by storm.

“I love it!” she said of today’s insta-fame. “Literally, I love TikTok. Blowing up off TikTok is a compliment for me. Like, ‘OK, what? I blew up on TikTok, but you’re sitting at home like a bum.’” she told DX in a 2020 interview. “It’s like at the end of the day, I really don’t care, because you’ve got to think about this. If people are trying to bring you down about your accomplishments, they’re already below you. Somebody has to be below you to try to bring you down.”

Flo, who has been pretty quiet for the last two weeks besides announcing her Rolling Loud performance, recently announced another upcoming performance at the 2021 Outside Lands festival taking place Friday (October 29). She will be sharing the same stage as Tyler The Creator, Kaytranada, and EarthGang.

Toosii Is Releasing Limited-Signed Thank You For Believing CDs, While “Beefing” with DDG Over Rubi Rose

2021 HipHopDX Rising Star Toosii surprised everyone this past week by announcing the release date for album Thank You For Believing, which will drop on Friday (May 7).

The announcement follows Toosii’s latest single releases “What It Cost” and “Back Together” in which both music videos have amassed over 2.5 Million views on Youtube.  After fans took under his post guessing who was featured on the album from Lil TJay to Drake, Toosii finally revealed his tracklist including features from Mulatto, DaBaby, and Key Glock.

Toosii also took to his Instagram to make an intimate video explaining the motive behind the gratitude-geared album, and offering to personally sign a limited amount of albums that will be sent out to his fans with purchase.

In the IG post, Toosii gives sentiments to his fans:

“From me to you, I just dropped a limited amount of signed CDs on my store, as another way to “Thank You For Believing.” Link in bio. Once you grab your copy, tag me in stories with your receipt so I can thank you personally.”

Outside of the excitement for Thank You For Believing dropping next week, personally autographing CDs, and reposting every screenshot of purchase made for the album on his IG story, Toosii still found some time to feud with fellow 2021 HipHopDX Rising Star, DDG.

You can read more about the feud between DDG and Toosii below, in the meantime you can pre-save Thank You For Believing here.

Although DX’s Rising Star DDG seems to be the most consistent out of the bunch, and also the most multi-faceted, he also tends to be the one involved in drama the most.

In an interview that Toosii recently did with DJ Akademiks, he claimed the tension between DDG has been marinating for months dating back to October of 2020. According to Toosii, DDG DM’d him to ask about his involvement with rapper Rubi Rose. However, Toosii took it a step further to back his claims by showing an alleged DM conversation between him and DDG where the “Moonwalking in Calabasas” rapper/YouTuber questioned Toosii about unfollowing him on the Gram.

More into the interview, Toosii revealed a heated exchange he shared with Rubi Rose, regarding DDG’s DM, in which the “Big Mouth” rapstress replied with:

After multiple alledged subs thrown on social media between DDG and Toosii, the two made it to a phone call where things got worst, resulting in Toosii telling DJ Akademiks:

DDG seems to be unbothered as he hasn’t mentioned anything more about the situation via social media, but he sure did use the opportunity to tease a music video for his latest TikTok-explosive song “Impatient” featuring Coi Leray, and promoting his feature on Melvoni’s “Get Money” alongside Tyla Yaweh.

Hopefully both DDG and Toosii can keep it about the music, even with both performing live at Rolling Loud.

Morray is one of 10 up-and-coming rappers named to HipHopDX’s 2021 Rising Stars! For more info on Morray and the rest of the talented Hip Hop bunch, read about them here.