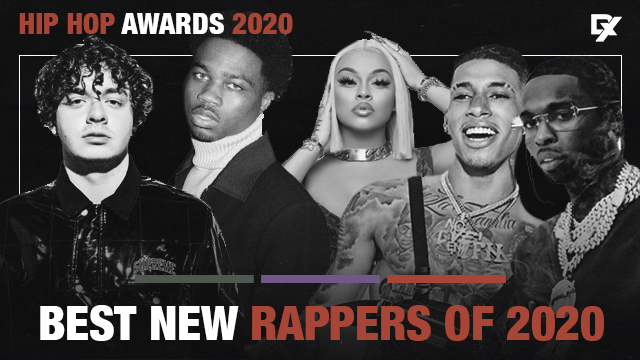 2020, a year marred by chaos and controversy, also served as a promising beginning for the next generation of new rappers, primed to take hold of the game in the coming year. Amid the turbulence of the COVID-19 pandemic, protests and the most divisive election in the nation’s history, five young rappers focused on their craft and game plan —  and succeeded despite the odds.

This year’s nominations for Rookie Of The Year are sonically and regionally diverse. Atlanta, Compton, Brooklyn, Memphis and Louisville are all represented in this list. Whether it’s Mulatto’s salacious bars, Roddy Ricch’s knack for a pristine melody or Jack Harlow’s contagious lyrics, each of these five new rappers proved that this year was just the beginning. Unfortunately, one of the biggest breakout artists of the year tragically had his career cut short. As we look back on 2020, we also remember the legacy of Pop Smoke.

The Rookie of The Year winner will be announced on December 28, 2020.

2020 Rookie Of The Year Nominations

This year’s winner is…

“The Box” placed Roddy Ricch in the superstar category — but he’s just getting started.

A newcomer whose knowledge of crafting a hit can rival any vet in the industry, Roddy Ricch took 2020 by storm. Please Excuse Me For Being Antisocial broke in the final days of 2019 and has served as much of the soundtrack for 2020. The debut album is already two times Platinum certified and spent months at the top spot of the Billboard 200. “The Box,” Ricch’s breakout single from his debut, spent eleven weeks at peak of the Billboard 100 and is unequivocally one of the best tracks of 2020. Ricch has also dominated the feature game, with notable verses on projects from Cordae, NLE Choppa, Pop Smoke, DaBaby and Gunna. A year into the game and Roddy is well on his way to stardom in 2021 and beyond.

Kentucky-rookie Jack Harlow exploded onto the scene with “WHAT’S POPPIN” and his debut album That’s What They All Say. Perhaps no song from 2020 will be better remembered than Jack Harlow’s “WHAT’S POPPIN” and its subsequent remix. The track has prompted TikTok trends and flooded social media feeds since its release in January. Though flattering comparisons were drawn early on in his career to the late Mac Miller, Harlow has shown he’s not the progeny of the late Pittsburgh artist but a well-rounded rapper with his own story to tell. Harlow followed-up his smash hit debut with “Tyler Herro,” dedicated to the Miami Heat rookie making waves in the NBA. Harlow just put Kentucky on the map: expect him to be around for a while.

Through a string of hits, Mulatto is on her way to taking the crown of Atlanta rap. A year ago, Mulatto was still on the fringe of Atlanta’s rap scene — now she’s a household name. Mulatto’s meteoric rise has been one of the most exciting storylines throughout 2020. Cosigns from artists such as 21 Savage, Saweetie and City Girls certainly helped her ascension, but it’s Mulatto’s unapologetic raps and unbridled confidence that’s guaranteed her success. Queen of Da Souf produced hits such as “Muwop” featuring Gucci Mane and showed Mulatto’s broad range of skills. With a masterful debut under her belt, Mulatto is carrying steam into 2021.

Whether he’s meditating or laying down brutal bars, NLE Choppa is a force to be reckoned with. It’s mind-boggling to remember that newcomer NLE Choppa just turned 18-years-old. The fiery spitter from Memphis first broke onto the scene in 2019 with Cottonwood, a raucous EP that placed him in Tennessee’s rugged rap lineage. But it was Top Shotta, Choppa’s debut project that certified him as being the real deal. Since the widely acclaimed Top Shotta proved Choppa as a rough Southern MC, the young rapper has shifted his direction towards more wholesome themes and sounds as he released From Dark to Light, a thoughtful EP consisting of raps about meditation, veganism and positivity. It’s unclear whether NLE Choppa’s character revelation will stick over the coming years, but his dexterous skills on the mic and intoxicating energy will carry him to whatever goal he has in mind.

The late Pop Smoke is the voice of New York — that’s not changing anytime soon. Hip Hop is still recovering from the loss of Pop Smoke, one of 2020’s best rookies and the most sensational act to come from Brooklyn in over a decade. Pop followed-up his breakout year in 2019 with Meet The Woo 2 which features fellow New Yorkers Fivio Foreign, Lil TJay and A Boogie Wit da Hoodie. Pop’s life was cut short in February of 2020 following a home invasion, which left his friends, family and fans reeling at the tragic loss of a young life and a talent extinguished at the upswing of his career. Shoot For The Stars Aim For The Moon, Pop’s first posthumous album was executive produced by 50 Cent, and reminded us of Pop’s talent and the potential he carried. Though his contemporaries are still active, Pop has single-handedly kept the Brooklyn Drill scene alive and his tunes still serve as the undeniable soundtrack to New York.