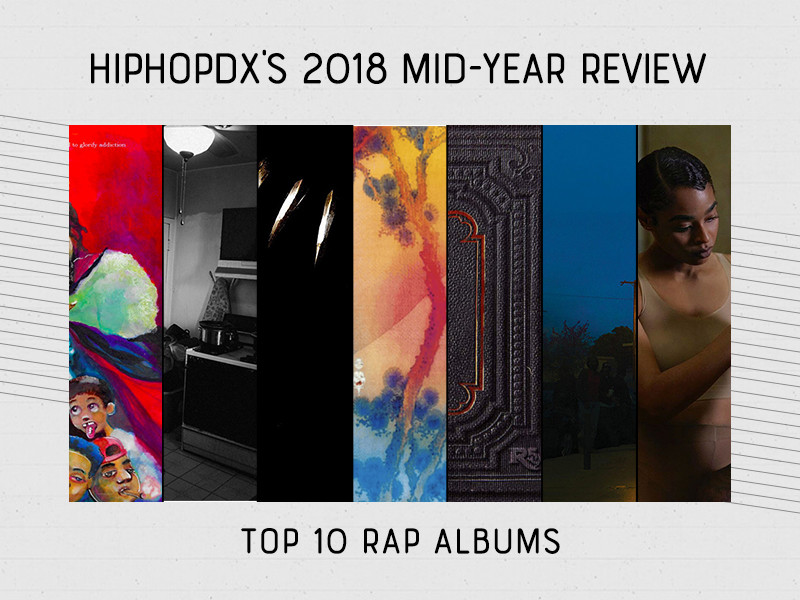 It felt like the first half of 2018 passed in the blink of an eye. Every week another crop of albums dropped, often completely erasing the cycle of the previous week’s releases.

But some albums endured, bubbling back onto the timeline with the occasional tweet heralding their outstanding quality and reminding followers of how much they once loved a project that was often only a few weeks old.

At the same time, the idea of what constituted an album shifted, as what was once considered a mere EP became the new normal for (mostly Kanye-produced) albums. Releases either adapted to coalesce with shortened attention spans, or ballooned to game streaming numbers into major sales equivalents.

So, here are DX’s picks for the standout albums of the first half of 2018, as determined by our editorial team.

If you’ve been sleeping on Neighborhood Nip’s grind the past 10 years, then Victory Lap will slap you awake like he did to that parking attendant at the 2018 BET Awards. The major label debut album of this corn-rowed Crip from Crenshaw is a hustler’s blueprint for success and sustainability on one’s own terms in the rap game.

He’s organically grown his audience and carved his own niche since the Los Angeles rap scene’s homegrown Jerk Movement heyday in the late 2000s. The songs “Blue Laces 2” and “Victory Lap” are triumphant West Coast gangsta rap, and the project finishes on a high note with closing track “Right Hand 2 God.”

Nipsey’s guttural delivery evokes his “succa-proof” attitude over ambient and choppy pianos (“Million While You Young” and “Hussle & Motivate”) and chunky fuzz bass-based bangers (the YG-assisted “Last Time That I Checc’d”). With all-star features from Puff Daddy, CeeLo and Kendrick Lamar, Nipsey’s life-long grind is paying him huge dividends with his blue pager buzzing. [Dana Scott]

Redemption maintains Jay Rock’s gritty and aggressive style while exemplifying the raw pain heard through his unique tone. It does a remarkable job of exposing his strengths and allowing listeners to witness his songwriting ability.

Two years after breaking several bones in a serious motorcycle crash, Rock doesn’t miss a beat as he explores harmonization on songs such as “Knock It Off” and “Rotation 112th.” Though many of the songs on Redemption carry an upbeat tempo live enough to make the ladies twerk, a closer listen often highlights Rock’s authenticity.

On “ES Tales,” he shows us a day in the life of a Watts, California native raised in the Nickerson Gardens Projects, and provides insight on the paranoia that can come with trying to survive the streets on “OSOM” featuring J. Cole. Redemption exemplifies Rock’s growth and shows his willingness to shift his style without running off course. [Cherise Johnson]

Saba, one of the brightest spots in Chicago’s thriving Hip Hop community, has offered his special storytelling and melodic production on projects such as 2016’s Bucket List Project. But, his most recent album, Care For Me, is far different. Saba’s lyricism remains top-notch, yet the tough subject matter results in a more poignant tone. A sense of raw emotion — reflective of what has been a tough year for Saba — can be heard throughout.

As such, Care For Me is a difficult-yet-necessary listen that touches on the loss of his cousin John Walt (“PROM/KING”), the ensuing depression (“FIGHTER”) and his early fights with newfound fame (“LIFE”), leaving listeners exposed to a much darker side of the MC/producer.

The heartbreak is genuine, as are the messages delivered in each song. At just 23 years old, Saba has already proved capable of creating timeless music. With a bright future ahead of him, his story is just beginning. [Andrew Gretchko]

Royce Da 5’9’s second album of 2018, Book Of Ryan, takes Nickel Nine’s fans to his Detroit origins, confronting his past demons and praising his guardian angels. The album is Royce’s 21-track catharsis, an eventful ride down memory lane.

It’s a far more intimate work than his album with DJ Premier, March’s PRhyme 2, and also more diverse. Royce occasionally sings his heart out while detailing some of his darkest childhood moments. He copes with an abusive, drug-addicted, alcoholic father (“Cocaine” and “Power”); fear of his own children enduring America’s harsh realities (the jazzy “Outside”); peer pressure into drugs and alcohol as a teenager (“Boblo Boat” with J. Cole); and his dreams of becoming a basketball star (“Amazing”). It all sounds like a monologue in a one-man show.

This was Ryan Montgomery’s therapy session, and we got to sit alongside him for a satisfying couch trip. [Dana Scott]

A grounded Phonte solo album is exactly what the chaos of 2018 needed. The former Little Brother frontman had been gearing up to release No News Is Good News, his second solo project, for what seemed like forever, but it arrived at just the right time.

Phonte has aged perhaps better than any other rapper still active in the game today and put together a very mature album that aims to Hip Hop heads. Tigallo’s rhymes on this album are blissfully conversational and the production remains right in his usual soul sample, piano-driven, boom-bap and crooning chorus wheelhouse.

No News Is Good News is a whole-hearted offering from one of rap’s most sensible voices. On one hand, he proved he’s still a top-tier lyricist with a sharp edge that hasn’t rusted. More importantly, he’s comfortable with his status and the man he’s become. [Scott Glaysher]

Not every year sees a movie soundtrack being heralded as one of the best standalone albums, but not every movie soundtrack has Kendrick Lamar serving as its executive producer. TDE’s brightest star did more than just showcase his versatility, curating a new experience as intricately layered as his own solo works.

With an immense scope that mirrors the colossal kingdom of Wakanda, Black Panther: The Album pulls from many voices that are shaping the current Hip Hop and R&B landscape, including Future, SZA and Anderson .Paak. Its extensive sound dips through moods with ease, linked together by a constant ferocity that keeps the album rolling along smoothly. Rather than dominating the spotlight, Lamar’s presence is often more subtle, popping up in the form of ad-libs and background vocals that allow the other artists room to shine.

When he does choose to rap a traditional verse, he’s as commanding as ever — look no further than the title track where he steps into the shoes of T’Challa and exalts himself accordingly. [Kenan Draughorne]

Pusha T’s DAYTONA, the first release from Kanye West’s epic Wyoming sessions, is a seven-song marvel. Debuting at No. 3 on the Billboard 200 and shrouded with hype, it’s the most significant success of King Push’s solo career.

The project’s seemingly real-time release also came with its own controversies. First, there was the cover: a paparazzi-owned photo of Whitney Houston’s bathroom at the height of her addiction —  a picture that cost Yeezy a cool $85,000. Then, there was the Drake jab on “Infrared,” which set off the feud of the year. Controversy aside, the album won with incredible production from Yeezy and an abundance of top-notch bars. Eghck! [Riley Wallace]

A week after ye’s release, Kanye West and Kid Cudi unleashed a long overdue self-titled collaborative project under the name Kids See Ghosts. Amid a hectic roll-out and hasty stream posting with incorrect song titles, the project was ultimately what Cudi fans had yearned for since Man On The Moon 2, and the rapping version of Yeezy fans hoped for the week prior.

The guests who appear on the project are so tightly curated it almost feels like the group is a much broader collective, with Cudi and West merely serving as lead vocalists among the supporting cast of names like Mr. Hudson, Yasiin Bey, Ty Dolla $ign, Pusha T and Anthony Hamilton.

Covering themes of mental health, spiritual and psychological reawakening, and returning to a less-polluted state of innocence, the album is a cathartic experience. Also, if Cudi’s hums on the “Reborn” intro don’t move you, you’re likely made of stone.

KOD proved J. Cole is rap’s king of the walk-off home run. After nabbing three consecutive No. 1 album debuts, proving his ability to go platinum (with no features) on his previous two albums 2014 Forest Hills Drive and 4 Your Eyez Only, it seemed like there wasn’t a new height for Cole to reach. But, that’s exactly what he did from a creative perspective on KOD.

Cole doesn’t quite have the iconic status of Prince, but the cautionary tales of addiction and vice, incisive political commentary and glorified life highs on KOD are the rap version of the late Purple One’s double-album masterpiece Sign O’ The Times. The songs on KOD range from the reflective and spiritual (“FRIENDS,” “Window Pain”), to danceable vibes (“Kevin’s Heart,”) to warning signs about chasing money (“BRACKETS,” “ATM”).

On top of all that, the didactic closer “1985” created a guide to longevity, artistic growth and self-preservation for an entire generation of rappers. [Dana Scott]

Beyoncé and JAY-Z are the very definition of a power couple. When the two music moguls got together for their joint album, EVERYTHING IS LOVE, it wasn’t surprising it caused a momentary internet craze.

Clocking in at nine tracks, the project is packed with personal revelations on their marriage — including Hov’s infidelity — and puts the period on a tumultuous chapter in their storybook romance. Beyoncé shows off her rapping prowess on the particularly catchy, trap-inspired “APESHIT” and Hov is rhyming with fury on songs like “Black Effect” and “713.”

The album comes with plenty of classic Hip Hop references and jazz-infused beats, lending it a sophisticated feel. The album closer, “LOVEHAPPY,” is kind of like an “eff you” to anyone saying they couldn’t make it through the fire. Evidently, their union is stronger than ever. [Kyle Eustice]

Check out our picks for the Top Songs, Most Slept-On Albums, Top Videos and Best R&B from 2018 (so far).