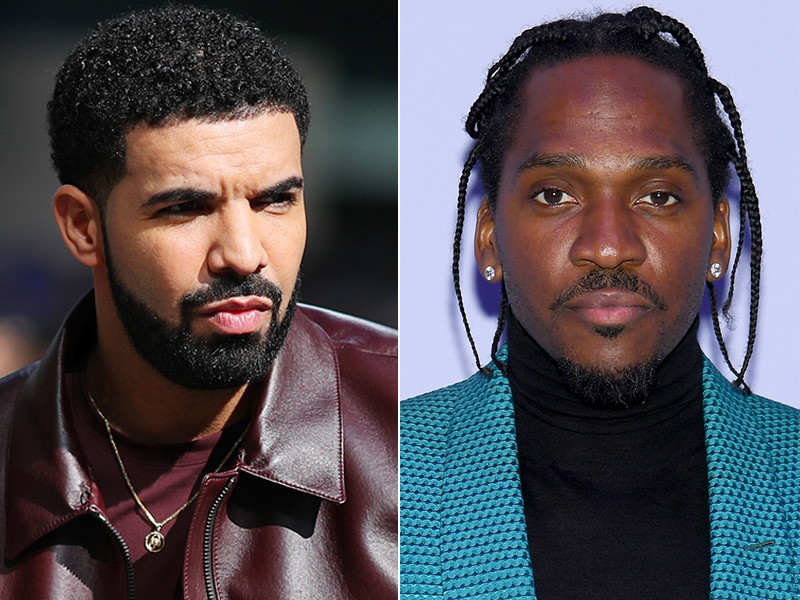 The back and forth between Drake and Pusha T has been one of the most exciting moments in Hip Hop this side of 2000. The diss tracks are educating the youth on the lack of borders when it comes to content in beef as well as restoring the competitive nature between rappers in lyricism, not album sales or chart numbers. And that’s just the impact from round one (although that might be all we’re getting if Kanye West’s apparent peace treaty holds).

But it’s easy for fans to get caught up with their previous allegiances, so HipHopDX is breaking down the numbers on both sides to give a fair presentation of the facts.

Number Of Years This Beef Has Gone On

The beef between Pusha T and Drake originally stems from an argument between Lil Wayne and Clipse in 2006.

Here’s a quick rundown of the timeline.

April 2006: After Lil Wayne appeared on an issue of Vibe wearing Bape, Malice rapped, “Niggas bite the style from the shoes to the watches” on the song “Mr. Me Too.” Each camp then played the other side down with disrespect in several interviews that followed.

May 20, 2011: Drake released the song “Dreams Money Can Buy” with the line, “And I feel like lately it went from Top 5 to remaining 5/ My favorite rappers either lost it or ain’t alive.”

September 26, 2011: Pusha releases “Don’t Fuck With Me” over the same beat as “Dreams Money Can Buy,” solely aimed at Drake.

May 24, 2012: Pusha kept the hits coming with “Exodus 23:1,” which had the memorable line, “You signed to one nigga that signed to another nigga/ That’s signed to three niggas, now that’s bad luck.”

September 24, 2013: Drake responded with the line “I’m just as famous as my mentor/ But that’s still the boss, don’t get sent for/ Get hype on tracks and jump in front of a bullet you wasn’t meant for” on “Tuscan Leather” from his album Nothing Was The Same.

October 12, 2016: Pusha released “H.G.T.V. Freestyle” and reignited the beef with “It’s too far gone when the realest ain’t real/ I walk amongst the clouds so your ceilings ain’t real/ These niggas Call of Duty cause their killings ain’t real/ With a questionable pen so the feelin’ ain’t real.”

October 23, 2016: Drake then responded with “But really it’s you with all the drug dealer stories/ That’s gotta stop, though/ You made a couple chops and now you think you Chapo” on his song “Two Birds, One Stone.”

May 25, 2018: Pusha’s song “Infrared” on his Daytona album contains the lines “How could you ever right these wrongs/ When you don’t even write your songs?” and “The game’s fucked up/ Niggas’ beats is bangin’, nigga, ya hooks did it/ The lyric pennin’ equal the Trumps winnin’/ The bigger question is how the Russians did it/ It was written like Nas, but it came from Quentin.”

# Of Actual Disses In Each Response

By DX’s count, Drake pulls away on the scorecard if this was a boxing match with punches landed. He strings together more combos like, “Father had to stretch his hands out and get it from me/ I pop style for 30 hours then let him repeat.” He also has a wider scope for his targets than Pusha, going after Virginia (Pusha’s fiancée) and other associates. Pusha picks fewer targets then hones in and digs deep, focusing on the baby mama drama. And don’t forget the artwork for “The Story Of Adidon.”

References To Other People

Duppy Freestyle: 8
The Story Of Adidon: 6

The collateral damage from this beef is far reaching as various members from each crew and family members have been name dropped. And without fail, Quentin Miller is brought up on both sides.

Both diss tracks are relatively clean. Each rapper chooses to keep the explicit content to the actual lyrical barbs.

Drake put energy into wordplay in his diss track, using song names as part of his insults. They include “Pop Style,” “Cruel Summer,” “30 Hours,” “Father Stretch My Hands,” and “Infrared.”

The difference in streams can be attributed to the fact that Drake’s response has been out several days longer than Pusha’s. But the average streams per day shows that Pusha has Drake beat on plays.

They both clock in at just over three minutes, but their approaches to what they do with that time is very different. Drake has a buckshot approach with his victims while Pusha prefers to snipe at those closest to Drake. In the literal sense of who said more, Pusha fit 338 words into his verse while Drake had 481 words.

Duppy Freestyle: 1.1M views and 288 contributors
The Story Of Adidon: 1.3M and 361 contributors

Pusha’s track has surpassed Drake’s among people looking into the meaning of the lyrics, even with it dropping four days later.

Please stop referring to this picture as “artwork”…I’m not an internet baby, I don’t edit images…this is a REAL picture…these are his truths, see for yourself https://t.co/gd6vRS3HM8 pic.twitter.com/2el58HEZ8F

Time Before A Response

While Drake wasted almost no time releasing his response to “Infrared,” Pusha took his time to craft something on his own terms. This is actually on brand for his latest album since the name comes as a result of Pusha feeling like he can afford to make music on his own schedule at this point in his career. The clock is running now on Drake’s side at this point for Round 2.

Drake, Push ima let y’all finish but “Loose Change” was one of the most disrespectful diss records of ALL TIME… ?????

This is what you get for going to anything with this bum involved. pic.twitter.com/nAziOqj2Hx

Somehow, the decades-long beef between 50 Cent and Ja Rule has started up again in the peanut gallery of Drake and Pusha’s battle. Ja Rule tweeted that “Loose Change” was “one of the most disrespectful disses of ALL TIME.” 50 was quick to reply with a jab about the Fyre Festival. The two have since gone back and forth on Twitter and Instagram to the joy of old heads.

# Of Jokes Resulting From The Fray

Too many to count

The internet was eating up the verbal exchanges between Pusha and Drake, with the latter getting the brunt of jokes for the revelation about his alleged baby mama. Take a look at a small portion of the antics below.

Drake: “youre not top 5 in your label”

Pusha T: “youre not in your son’s life and your producer about to die” pic.twitter.com/K8HfgEvs8U

“the hell wrong with my suits” pic.twitter.com/cc98w0ha5I

Meek Mill listening to The Story of Adidon pic.twitter.com/z5STCfrYOY

I just saw that Ja Rule commented on the whole Drake vs. Pusha T beef, which is hilarious to me.

Each time I hear about Ja Rule giving his opinion on anything, all I can think about is this Dave Chappelle clip. WHERE IS JA?! pic.twitter.com/NMsOsUhQcJ

Y'all took this Drake and Pusha T beef too far ?? ain't no way Drake is coming back from this. pic.twitter.com/dglXfgeugp