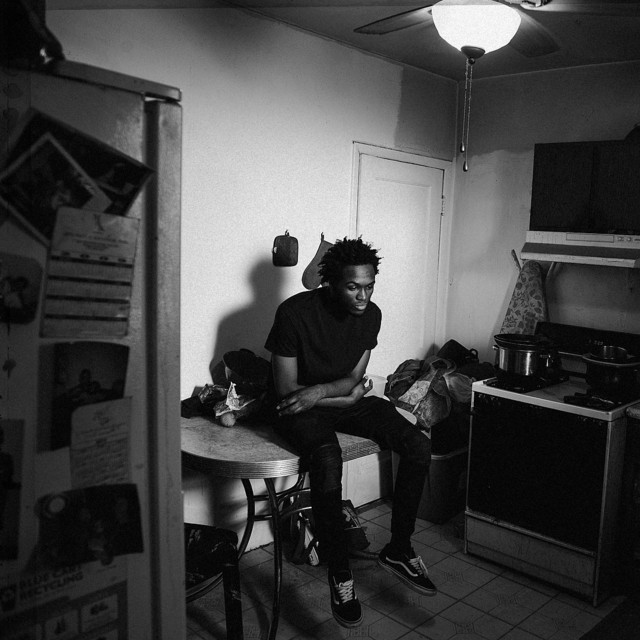 Amid the constant flood of new artists who are here today and gone tomorrow, Saba has carved out a sustainable career with a loyal fan base. Despite releasing quality work for the last six years, he — like many Chicago artists — often remains in the shadow of frequent collaborator Chance The Rapper. But Saba’s new album, Care For Me, is the type of project that could change this perception.

Saba’s previous releases showed flashes of brilliance (2016’s Bucket List Project, in particular) but Care For Me is the product of a fully realized artist. From front-to-back, the PIVOT Gang MC’s latest record is a compelling and engaging listen that should force fans and media alike to reconsider his place in Hip Hop’s food chain.

The album thrives due to Saba’s willingness to open himself up to listeners, exploring the most impactful moments to his psyche. Moments of jubilation and sadness are delivered through a variety of flows, distinctive vocals inflections and colorful storytelling.

The death of John Walt, Saba’s cousin and close friend, is an unabating presence on the 23-year-old rapper’s mind with multiples references to it on the LP. On “Life,” it’s part of the hook (“They killed my cousin with a pocket knife”) and on the lead single “Busy,” it’s mentioned when discussing his lack of trust (“Jesus got killed for our sins, Walter got killed for a coat”).

The most gripping recollections of the late John Walt occur on “Prom/King,” which begins with a firsthand account of his cousin’s efforts to get him a prom date. Over soft piano keys, the song provides a glimpse at their early relationship, but the mood changes as drums kick in and Saba’s delivery becomes more assertive. The scene jumps to their college years and early days on the music scene before Saba and the beat intensify once again. The drum pattern reaches a breakneck speed, matching Saba’s frenetic state when he receives a phone call about his cousin’s whereabouts.

These types of beat switches are used effectively throughout the album. Saba, daedaePIVOT and Daoud — who produced the entire LP together — typically use these sonic shifts as distinctive closers for songs.

Sometimes it’s a bit frivolous, such as the distorted vocals and tempo change on “Fighters,” but for the most part, it works as a transition between tracks. Overall, the trio crafts a mix of jazz club-ready production and a heavenly gospel-influenced sound with occasional deviations, such as the pounding 808s of “Life.”

Outside of the deeply personal cuts, Saba gives his perspective on the digital age and the music industry. Chance The Rapper briefly assists on “Logout,” which expresses disillusionment with social media. Lil Chano’s appearance is too abrupt, preventing a good track from being a potentially great one with a more substantial guest spot.

Saba’s most biting commentary, “Grey,” scrutinizes the artistic turmoil between creating meaningful music and meeting label demands for what’s marketable. “The best song’s probably on the B-side/ Won’t be surprised when the label deny,” he croons on the hook.

The catchiness of the song paired with its content is clever, but his finest performance comes at the conclusion of the standout cut. The vibrant horns become prominent and Saba’s bars transform from relaxed to forceful. He expounds on his goal to craft timeless music unlike many of his peers, rapping, “Don’t nobody wanna be great/ Everybody wanna be seen/ And nobody wanna be quiet/ Everything is grey.”

With Care For Me, Saba accomplished his objective by making an album that can endure for years to come. His higher aspirations won’t afford him the visibility of the rappers acting out for attention, but projects like Care For Me should put him into the discussions of his generation’s best Hip Hop artists.