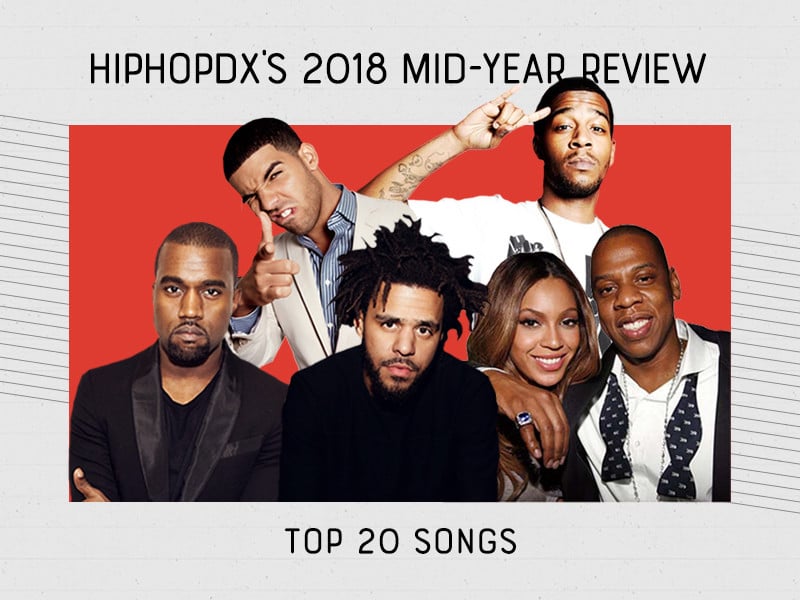 The first half of 2018 was like an intravenous hit for Hip Hop fans, with new projects coming faster than most listeners could handle. We got new albums from J. Cole, JAY-Z, Nas, Pusha T and Drake, as well as 36 new songs produced by Kanye West across five different projects, including his own.

But among that glut of music, there were singles that were able to separate themselves from the competition, whether it was through ear-worm melodies, audacious visuals, internet crazes or just sheer quality.

Check out our picks for the Top 20 songs from the first six months of 2018, based on a combination of votes from DX’s editorial contributors.

Who could’ve guessed Pete Rodriguez’s 1967 hit “I Like It Like That” would find new life in 2018? Cardi B made it happen by revamping the boogaloo party cut with Bad Bunny and J Balvin for a Latin trap anthem. Cardi’s star power makes it work, allowing listeners that don’t even speak Spanish to enjoy the multi-language record. [Justin Ivey]

The collab between Kanye West and Kid Cudi that fans had been clamoring for since 2009 finally dropped this June. A self-titled seven-track project, Kids See Ghosts features the standout track “Reborn,” which features a catchy, melodic hook courtesy of Cudder and some introspective words from Ye.

The “way-oh-way-oh” chants from Cudi and reflective lyrics from West serve as a throwback to an earlier time, and while the combo doesn’t exactly make for a summer banger, it’s a return to what made each artist special in the first place. Better late than never. [Andrew Gretchko]

Prior to his June 18 shooting death, XXXTENTACION was on his way to having a formidable rap career. One of his last offerings was “SAD!,” a song about depression, suicide and heartbreak that perpetuated the emo-rap style that launched him. The song was already a hit, debuting at No. 17 on the Hot 100, but it skyrocketed to No. 1 and set a streaming record on Spotify shortly after X’s death. [Kyle Eustice]

Black Thought is already heralded as one of best MCs to ever pick up a mic. On his collaborative effort with producer 9th Wonder, Streams Of Thought Vol. 1, the track “9th Vs. Thought” proves for the umpteenth time The Roots frontman is lethal with the pen. From references to Macklemore and Ryan Lewis to Cinderella, his dense wordplay leaves any competition in the dust. [Kyle Eustice]

Over the past few years, the brothers from Tupelo have repeatedly proven they’re more than one-hit wonders. The third installment to their SremmLife series (titled SR3MM) was a triple disc anchored by the pulsating single, “Powerglide.”

The track featured a perfectly executed flip of Three 6 Mafia’s “Side 2 Side,” courtesy of co-producers Mike WiLL Made-It, Hovart and Mally Mall. In true Rae Sremmurd form, Swae Lee handles the catchy chorus while Slim Jxmmi laces it with a formidable verse. [Scott Glaysher]

Serving as the climax of Kanye West’s ye solo release, “Ghost Town” is one of most powerful records of the year. With emotion-filled contributions from Kid Cudi and 070 Shake, West was able to deliver a true introspective moment, reminiscent of what “Runaway” did for My Beautiful Dark Twisted Fantasy. [Marcus Blackwell]

Drake’s 2018 has been filled with high highs and low lows, but that hasn’t changed the fact that he’s a certified hit machine. The collaboration between Memphis’ BlocBoy JB and Drizzy for the Tay Keith-produced banger “Look Alive” has been one of the most exciting team-ups of the year so far, debuting at No. 6 on the Hot 100.

Drake’s edgy raps and Blocboy’s charismatic delivery make for a deadly combination, and the record had folks hitting the “Shoot” dance all year. [Marcus Blackwell]

Like many of the tracks on Phonte’s No News Is Good News, “Sweet You” is grown-man rap done right. This ode to his wife covers the ups and downs, all without being corny and still managing to deliver lyrical gems. Tall Black Guy’s two-step-inducing production completes the package for one of the best tracks 2018 has to offer. [Justin Ivey]

In 2016, Anderson .Paak proudly announced he had “GLOWED UP” — two years later, his achievements are literally bubbling out the bag. The multi-talented artist from Oxnard, California raps with seasoned bravado on “Bubblin’,” taking pride in his journey while reveling in the fact that he’s finally reached his destination. He’s toured the world on his path to superstardom, and his next album should only serve to propel him to even greater heights. [Kenan Draughorne]

Arguably the most intriguing song off of West’s ye album, “Yikes” explores themes of addiction and intoxication, even referencing Prince and Michael Jackson. At face value, the track paints a frightening picture of the severity of West’s personal problems, explaining some of his more erratic behavior.

But considering the themes of freedom and rebirth that appear on both ye and Kids See Ghosts, is the track talking in the past or present tense? [Riley Wallace]

Though reports have said otherwise, it sure looked like Pusha T prompted Drake to rewrite some of Scorpion after delivering “The Story Of Adidon.”

The G.O.O.D. Music president went all in for his “Duppy Freestyle” response, accusing Drake of being a deadbeat dad with the savage “You are hiding a child” line. The song’s cover art also featured a smiling Drake in blackface.

The result? A post from Drake explaining the image, and a month later, a full admission to being the father of Sophie Brussaux’s infant son on the Scorpion tracks “March 14” and “Hopeless.” [Kyle Eustice]

Push had plenty more fire this year aside from just his Drake diss track. His long-awaited and now-acclaimed DAYTONA album only brought more fans to the fold, and sent Drake stans into hiding. But beef aside, the opening cut of DAYTONA is possibly the album’s best for a few reasons.

First, West’s production is a departure from what we expect from him. An eerie sample chop woven through cascading chord progressions and synths — its triumphant yet terrifying. Push delivers a cocky array of drug dealer bars, gratifying his core fan base that definitely “know” what his surgical summer is all about. [Scott Glaysher]

The spirit that inspired much of Saba’s excellent Care For Me album comes into haunting focus on “PROM/KING,” a seven-minute memorial dedicated to the life of Saba’s cousin and fellow rapper John Walt.

Saba spends the first half of the song detailing how he and Walt became close as prom night approached, before frenetically ramping up the pace on the second half as the timeline races toward Walt’s untimely death. Already a moving story, Saba reveals himself as the perfect person to detail the narrative with his captivating flow and passionate vocals, honoring his comrade’s legacy in the process. [Kenan Draughorne]

“Nice For What” ended up on the slower, R&B-driven side of Drake’s Scorpion double disc, but the high-energy beat and uplifting message kept it blaring across radios all summer. Thanks to Murda Beatz’s rapid-fire hi-hats and a perfect sample chop of Lauryn Hill’s “Ex-Factor,” this Hot 100-topping single is a standout track on Scorpion, as well as within Drake’s overall catalog.

The song’s inherent bounce is dangerously catchy as Drake calls for strong independent women to “pipe up” on their male counterparts. Plus, the video (which is at 210 million YouTube views and counting) features some of Hollywood’s most powerful women doing just that. [Scott Glaysher]

Marvel’s Black Panther was an instant box office hit upon its February 2018 release. A big component to the film’s release was the accompanying soundtrack, the aptly titled Black Panther: The Album, which was curated by Kendrick Lamar and Anthony “Top Dawg” Tiffith.

The pop-tinged “All The Stars” featuring K. Dot and SZA closed out the film, making it the only song from the soundtrack to be used in the movie. With its catchy, melodic hook and captivating beat, it was easily the most intoxicating song on the TDE project. [Kyle Eustice]

“King’s Dead” is a banger. There’s no way around it. Jay Rock’s relentless delivery is complemented perfectly by Mike WiLL Made-It’s infectious production. Future’s hilariously catchy, Juicy J-referencing “La di da di da/Slob on me knob” makes for an unforgettable moment on a track where we find each artist at their strongest.

You can’t go wrong with a Kendrick Lamar conclusion, and he closes the record with a fiery, tactical verse, putting a bow on one of the most exciting records of the year. [Marcus Blackwell]

Spawning one of the most quoted bars of 2018 (“I only love my bed and my mama, I’m sorry”), “God’s Plan” is Drake acknowledging positivity amid the sea of detractors praying on his downfall.

It also sees him making lots of reference to creating a legacy, should he face an untimely death. That concept carried over to the heartwarmingly charitable video that saw him performing acts of kindness while passing out a million dollars. With its success, it virtually guaranteed that Scorpion was eligible for platinum certification upon its release. [Riley Wallace]

Over a Pharrell soundscape and sporadic Migos ad-libs, Hip Hop’s power couple flexes on the game, oozing smoothness and opulence in this certified banger.

The song was released in tandem with a video shot in The Louvre, and the image of the couple in front of the Mona Lisa ties the trap-flavored track to high art. [Riley Wallace]

J. Cole takes the kids to school on the KOD scorcher “1985.” Despite many assuming it was a Lil Pump diss track — including Lil Pump — the song is really an ominous warning to the entire younger generation of SoundCloud rappers.

Cole doesn’t shy away from predicting a grim future on Love & Hip Hop if they don’t step up the quality of their music. Moral of the story: money and jewelry is temporary, content is forever. [Kyle Eustice]

1. Childish Gambino – “This Is America”

As Donald Glover/Childish Gambino pulled double-duty as host and musical guest on the May 5 episode of Saturday Night Live, he unleashed a new song called “This Is America,” immediately following it with a powerful visual for the track.

Over a deep, speaker-rattling bass line, Gambino tackles issues of police brutality and America’s gun obsession with a purposeful air of apathy to illustrate how numb people have become to deadly shootings. [Kyle Eustice]

Let us know your own picks below, and check out our mid-year picks for Most Slept-On Albums, Top Rap Videos and Best R&B.