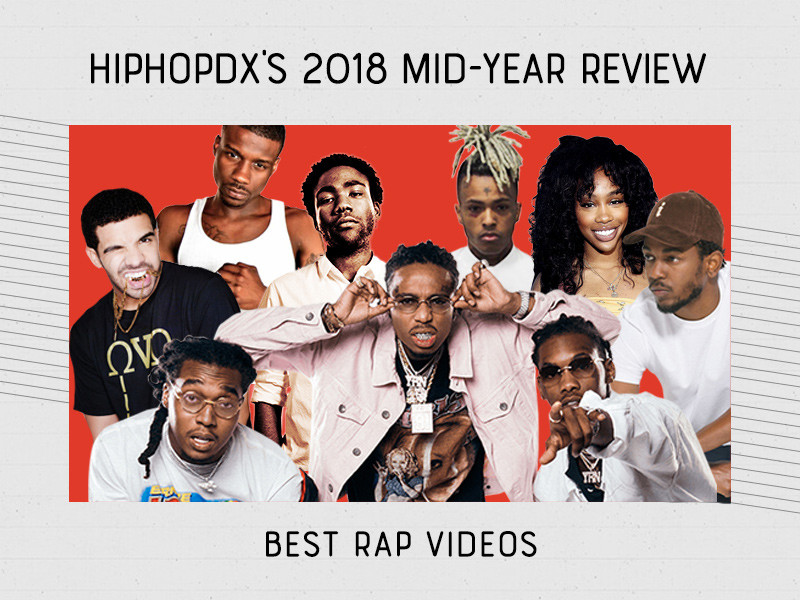 So far, 2018 has been another wild year for new music and Hip Hop happenings, and with summer here, it’s only going to get more fuego. It’s also been a great year for creative music video treatments from some of the game’s best and brightest.

2017 presented amazingly outside of the box visuals, and with the bar lifted, some of the industry’s most sought-after directors are rising to the challenge.

Here are our picks for the 10 best videos from the first half of 2018.

Drake proves that you don’t need to load a visual with an egregious amount of strippers and vixens to stand out. Karena Evans pulls together a brilliant visual ode to female empowerment starring the likes of Olivia Wilde, Misty Copeland, Issa Rae, Rashida Jones, Jourdan Dunn, Tracee Ellis Ross, Tiffany Haddish and many more.

Migos took the Culture II standout “Walk It Talk It” to another level with this unique treatment. Dripping with Soul Train aesthetic — complete with bell-bottoms, afros and Drake’s hilarious jheri curl — this Quavo co-directed visual’s throwback accuracy is rivaled only by Bruno Mars’ “Finesse” remix.

A great example of a visual that doesn’t match the song, Nabil transforms “Doves In The Wind” into a super fun kung-fu flick, complete with hilarious voiceover and sound effects.

“Kevin’s Heart” is an awesome song on its own. But as the soundtrack of a self-aware, cinematic visual of comedian Kevin Hart riding around L.A. doing mundane things while encountering an equal balance of judgment and temptation, it’s absolutely brilliant.

Tierra Whack’s Whack World is a lot to unpack. In the spirit of a complete visual album à la Lemonade, it’s a 15-minute series of brilliantly creative (and literal) vignettes. If you haven’t taken this one in yet, stop what you’re doing and get to it — because you’re missing out.

From eating elote in a palm tree while wearing a bubble goose, to a scuffle (and shooting) in an alley, to the hustle and bustle of a busy corporate environment, this video has all the elements you’d expect from a Dave Free treatment.

Accompanying the surprise album and shot secretly in the Louvre, “Apeshit” is not only a symbol of extreme opulence but a dynamic visual feast loaded with lots to unpack. Let’s all just appreciate that Hip Hop’s most valuable couple holding hands in front of the world’s most famous painting is about as iconic as it gets.

Released 10 days after his murder, this video seemed to address much of the debate around XXXTENTACION’s violent past from beyond the grave. The JMP visual shows X wrestling with the dark and light elements of his personality, ultimately choosing to spread positivity.

No matter how you feel — or felt — about Drake, watching the genuinely heartwarming reactions of the various lives he touched while systematically giving away $996,631.90 around the Miami area is next-level touching. PR stunt or not, the positive energy is infectious.

1. Childish Gambino – “This Is America”

One of the fastest videos to reach 100 million views on YouTube, this Hiro Murai visual banquet — which launched in tandem with Gambino’s debut performance of the song on Saturday Night Live — takes the track into dark, enthralling territory, layering enough Easter eggs to warrant multiple watches. Lots and lots of watches.