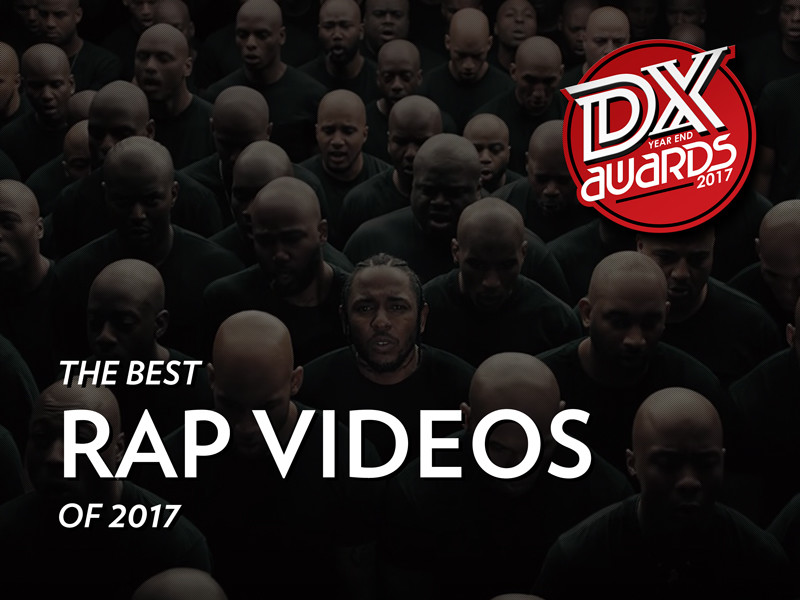 2017 was a great year in music, with huge records like 4:44 and DAMN. dropping alongside a host of high-profile releases that kept Hip Hop Twitter debating endlessly. But it was also a great year for big budget videos. From Kendrick Lamar to Young Thug, there have been some intensely fun and fascinating treatments — some of which stepped so far outside the box they’d need binoculars to see it.

Here at HipHopDX, we’ve broken down our top visuals from the past 365 days.

Do you agree with our list? Let us know in the comments.

Riding high off the release of two back-to-back albums that had the whole game talking, Future gave the undeniable hit “Mask Off” the royal treatment. The visuals find the Trap Jesus riding through the city at night through a tense, violent clash between the authorities and what at points appears to be Purge night. But that’s just the side story to his voyage with 21 Savage’s now boo, Amber Rose, who can’t keep her hands off him.

Director Colin Tilley had a great year: aside from the massively popular “Mask Off,” he also provided DJ Khaled with a striking visual treatment for “Wild Thoughts.” Not only does it bear a nighttime aesthetic similar to Future’s wildly successful hit, but it also stays somewhat true to the overall vibe of the original sample’s video, 1999’s “Maria Maria” by Santana featuring The Product G&B.

Continuing his work with Dave Meyers & The Little Homies (a.k.a. himself and TDE President Dave Free), Kendrick and Rihanna are a ride-or-die duo in this visual feast from DAMN. From beating up a john and holding steady among street sharks to dangling Riri off the edge of a building as they continue to chant the hook, it’s pretty damn engaging.

Ripe with all types of conversation-starters about the history of black people in America, JAY-Z’s “The Story Of O.J.” is a hypnotizing black-and-white animation that was impossible to turn away from. It premiered on TIDAL and was one of the few 4:44 visuals to make it off the platform onto YouTube.

Without a doubt, “DNA.” is one of the most creative visuals of the year when it comes to script. Lamar takes over actor Don Cheadle’s mind during an interrogation, which results in the two going back and forth bar-for-bar in a super energetic performance.

As gorgeous as it is brutal, “ELEMENT.” was yet another look at the visual genius that Lamar brings to the table to complement his music. While paying not-so-subtle tribute to the work of pioneering black photojournalist and filmmaker Gordon Parks, the video strings together sparse tranquil moment and seemingly unrelated scenes of violence and destruction. Those moments are captured in such a way that the hook “If I gotta slap a pussy-ass nigga, I’ma make it look sexy” actually rings true.

. @kendricklamar with the beautiful homage to photographer Gordon Parks in his new Element video. pic.twitter.com/mfPamAyqUR

French Montana cracked his glass ceiling and put himself on another level with this catchy song, but the video changed his life. While filming alongside the residents of Uganda, he fell in love with the warmth of the people he met. His #UnforgettableChallenge also helped raise a sizable amount of money for the impoverished community where he filmed, which was used to build a new health center.

After an undeniably rocky year for race relations in America, Joyner Lucas wrapped his 2017 with a simple yet powerful treatment for his polarizing “I’m Not Racist.” Whether you felt that the video was the most woke thing you’ve seen all year or that it was a grossly outdated suggestion that racism can simply be solved by “hearing each other out,” this video is pretty incredible and inspired substantial dialogue.

A definite standout on Wins & Losses, “Young Black America” is a gritty narrative of life — as Meek saw it — coming up on the streets of Philadelphia. The video, which is more of a mini-movie, gives a dark, well-structured representation of reality with no filter. Meek took his share of Ls this year — this wasn’t one of them.

Tyler The Creator – “Who Dat Boy”

After (partially) blowing his face off in the self-directed visual, Tyler The Creator’s neighbor A$AP Rocky helps him out by sewing a new white face onto his. That’s before Tyler leads police on a car chase. If you’re still not a fan of Tyler at this point, the question is why?

Without question, this is one of the most important songs of the year, and the video gives incredible power to the message. The cinematic seven-minute visual, which stars both Don Cheadle and Luis Guzman, explores the life of a teenager struggling to come to terms with his sexuality in the face of bullying and feelings of inadequacy when it comes to his father. It’s not an easy watch — and that’s the point.

First trekking into the mountains to meet a drug dealer who cooks up with Pyrex over a campfire, the trio then celebrates in the snow with women and snowmobiles before getting cozier in a cabin. It’s a ridiculous departure from the Migos norm, and it’s phenomenal.

When Young Thug showed up 10 hours late for this video and director Ryan Staake’s $100,000 shoot basically fell apart, he spun all the footage he had (along with the story) into something that without question could turn even the staunchest Young Thug hater into at least a casual observer. It’s that entertaining.

The visuals for Kendrick Lamar’s “HUMBLE.” have been nominated for a slew of awards (including the Grammy for Best Music Video), and for good reason. It’s a cinematic marvel shrouded in aggressive symbolism, from the juxtaposition between K. Dot as the Pope to him showering himself and women with money. The three minutes are filled with striking imagery, with Kendrick reenacting Leonardo da Vinci’s “The Last Supper,” standing out as the only one with hair in a sea of bald heads, and wearing white at a funeral. It took an already successful single to the next level.