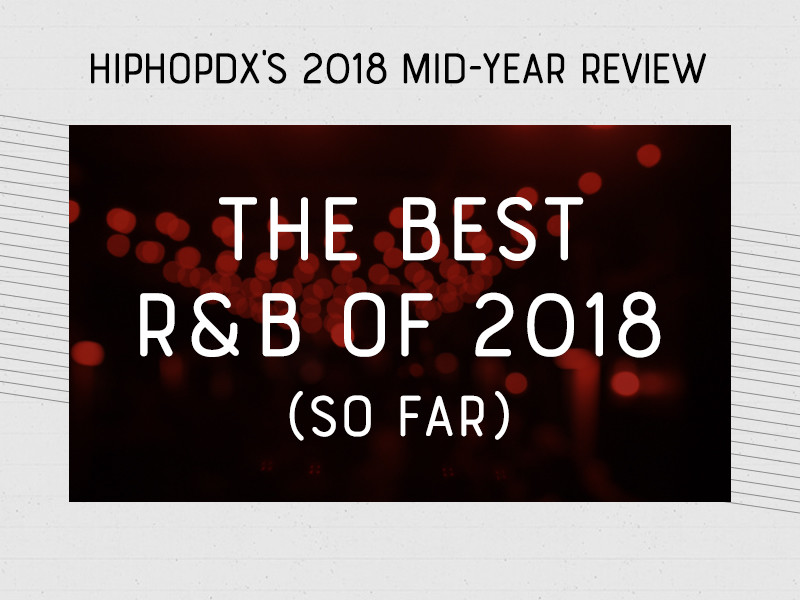 Midway through 2018, R&B is having an unshakable moment, with plenty of great albums and mixtapes being released.

Notably, female R&B singers are enjoying a momentous time in the love-focused genre, which is why women dominate HipHopDX’s list of the best R&B of the first half of 2018.

Jazz-infused production, slow hi-hats and drawn-out synths are the crux of today’s emerging R&B music — and good riddance to the trendy sounds of Trap&B that dominated 2017.

TDE’s SiR examines dating in today’s climate (and other lurid tales) with his sophomore effort, November. His standout cut “Dreaming of Me” carries a vibe reminiscent of an old D’Angelo record and the rest of the album maintains the same ambience. There’s nothing but soul emanating from November.

Ne-Yo is a genius at creating music with infectious melodies, and Good Man is a reminder that the Grammy Award-winning artist still has it. At 20 songs, Good Man is a pleasant mixture of dancehall-influenced numbers and the popular trap sound.

As a veteran in the game, Ne-Yo graciously features musicians who grew up inspired by his songwriting, such as PARTYNEXTDOOR on “On Your Mind” and Eric Bellinger on “Hot Box.”

1500 or Nothin’s My Guy Mars took the executive production initiative on Mýa’s T.K.O. (The Knock Out) and it’s everything you’d expect from a woman who first came onto the scene in 1998. No song on T.K.O. deserves to be skipped, especially the emotional “Ready 4 Whatever 2.0” and empathetic “Damage.”

Ravyn Lenae’s voice is velvety, unique and addicting. The Chicago-born singer uses her vocals to whip listeners into her romanticized vortex with the five-track Crush EP. It’s produced entirely by The Internet‘s Steve Lacy and includes two beautiful duets sung by the pair, “Computer Luv” and “4 Leaf Clover.”

Janelle Monáe’s brilliance shines on Dirty Computer, with clear influence from the late Prince. Monáe takes us through a series of human thoughts and emotions and also pushes for sexual liberation, all while tying everything to womanhood and the Black experience.

Good Thing perfects retro-soul, showing off Leon Bridges’ singing prowess and providing a rich base of relatable relationship topics. The crashing intonations of hi-hats, intermingled with the sounds of brass instruments and the strums of bass guitars, bring to life an album that your grandmother and aunties can easily fall in love with.

Tinashe’s Joyride was a long time in the making. After buying her album’s title track back from Rihanna ahead of its release, Tinashe was free to deliver a comprehensive R&B album that was worth the wait. “He Don’t Want It” and “Ooh La La” are the standout cuts here, as well as her cautionary song “Stuck With Me” featuring Little Dragon.

Teyana Taylor’s K.T.S.E. (Keep That Same Energy) may have been released incomplete due to sample clearance issues (a Lauryn Hill sample for “Rose In Harlem” and another song are entirely missing from the project), but the eight-song album has proven to be good enough just as it is.

It’s the most creative we’ve heard Tey, and the project exalts an old-school, jazzy vibe reminiscent of the ’70s with a modern twist courtesy of Kanye West’s production.

2. The Weeknd — My Dear Melancholy,

On My Dear Melancholy, *The Weeknd took a step back from the ’80s pop-synth sound expressed on 2016’s Starboy and brought it back to The Weeknd from 2011. What makes My Dear Melancholy special is its ability to maintain listeners’ attention for all six songs before they realize the emo-fest is over.

U.K. singer Jorja Smith’s debut album Lost & Found offers a renovated version of neo-soul and wraps it in the pains of unrequited love. The gradual crescendo of each track provides enough time for the classically trained singer’s crystal clear voice to guide us to its highest points.

Aside from her popular cut “Blue Lights,” records such as the strength-finding “On Your Own” and ambiguous-relationship-status-addressing “Wandering Romance” are just as important.

Lost & Found is a solid R&B album that shows plenty of potential for the 21-year-old singer.

Let us know your top own picks in the comments below.