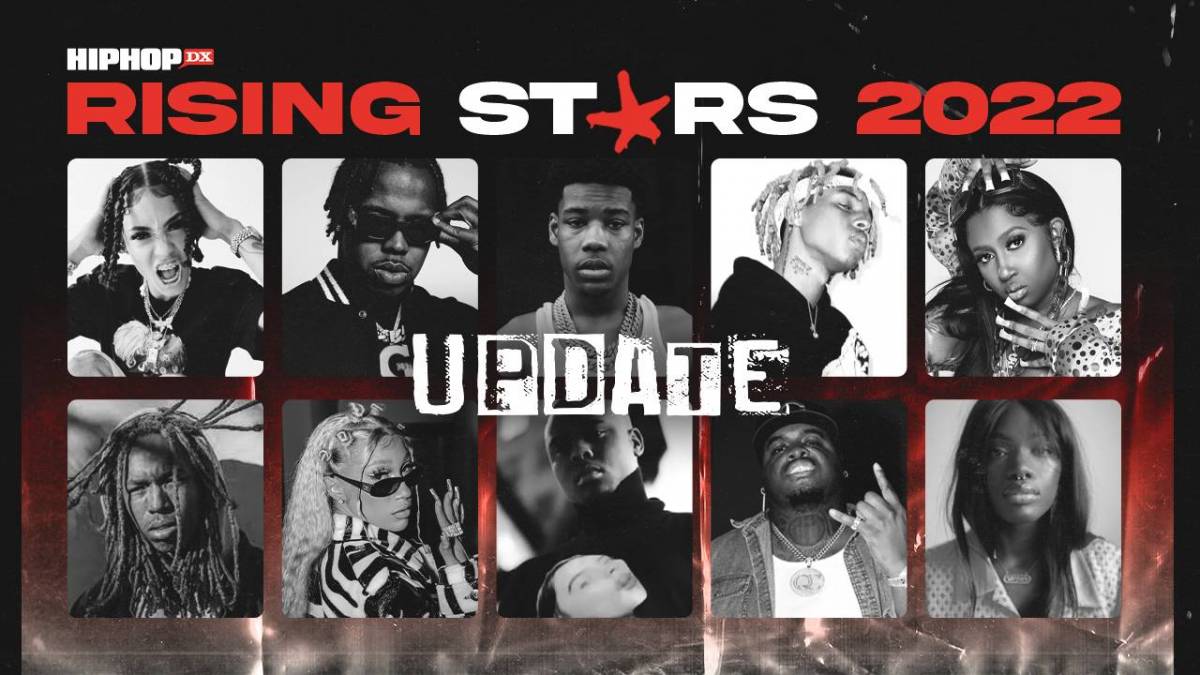 At the top of the year, HipHopDX set the tone by once again electing 10 up-and-coming artists to be part of the 2022 Rising Stars class, which was preceded by artists such as Blxst, BLEU, Morray, 42 Dugg, and more last year.

With the year already more than halfway through its 365-day course, DX has taken the responsibility of tracking the progress of this year’s Rising Stars and laying out the blueprint for their breakout success for the sake of establishing a detailed record of their growth.

Check out the full details on what each of DX‘s 2022 Rising Stars have going on currently below:

There’s no denying the fact that Baby Tate gained an incredible amount of traction last year after releasing the deluxe edition of her project After The Rain and earning co-signs from Rihanna and Raedio founder Issa Rae. But it’s clear the “I Am” lyricist kept that same energy throughout the first half of 2022.

She kicked the year off strong in January by announcing she had become an ambassador for Rihanna’s Savage X Fenty brand after RiRi reached out to her on Instagram following her AfroPunk performance. She also notched her first-ever Billboard Hot 100 Chart entry thanks to a standout contribution on Dreamville rapper JID’s 21 Savage-featuring “Surround Sound” single.

And even though Baby Tate hasn’t released a full project since her After The Rain EP, she has remained committed to releasing a consistent string of singles, which include her banger “Pedi” and her double-single “What’s Love” and “Slut Him OUT.”

However, there is still hope that Baby Tate will deliver her highly anticipated debut album this year as she revealed to DX her plans to deliver her Mani Pedi project during her exclusive Rising Star interview.

Few artists have the major co-signs that BIA is fortunate enough to boast early on in her career.

After claiming the attention of the universe in 2020, due to her remarkable performance on Russ’ hit “Best On Earth” single, she went on to tour with superstar acts such as Ariana Grande, Pusha T and J Balvin. She also connected with the one and only Nicki Minaj last year for their platinum-certified “Whole Lotta” collab.

But it wasn’t until 2022 that BIA truly went from being considered a promising talent to a true Rising Star, as she effectively held her own while going bar-for-bar with J. Cole on their anthemic collaboration “London.” The Dreamville MC was actually so impressed by BIA’s elite level of lyricism on the record that he also took it upon himself to bring her out as a special guest during his performance at Wireless Festival in the United Kingdom last month.

And even though BIA is still promoting the deluxe edition of her For Certain EP, she’s also managed to connect with her fellow DX Rising Star classmate and TDE signee Doechii for David Guetta and Afrojack’s “Trampoline” single, which also features legendary Hip Hoper Missy Elliott.

While Coi Leray’s Rising Star status was bestowed upon her by DX earlier this year, the Republic Records rapper realistically deserves an award or some sort of acknowledgement for her resilience and perseverance.

After funneling the hype she created in 2021 behind a popular string of singles, which include her Lil Durk-assisted “No More Parties,” Coi Leray unleashed her debut album Trendsetters in April, which saw her collaborate with artists such as Pooh Shiesty, Yung Bleu, G Herbo, Polo G and more.

Nicki Minaj, who also appears on the album, even gave Coi Leray her flowers for her lyrical performance on their “Blick Blick” collaboration — which Nicki revealed she pulled one of her verses from in order to celebrate Coi’s handy hook-work. Despite sluggish first-week sales numbers and ongoing criticism from her estranged father, Coi Leray has continued to stand on her work and hit the road on her first-ever headlining tour in June.

Coi Leray has also continued to showcase her tireless work ethic throughout 2022 as well by performing at several major festivals, including Hot 97 Summer Jam in New York City, collaborating with Fivio Foreign and Queen Naija and following in the footsteps of Drake by locking down her very own Sprite commercial.

If inking a record deal with Top Dawg Entertainment, the former label of Kendrick Lamar, wasn’t enough of an indicator of Doechii’s star power, the moves she’s made since to secure the bag certainly are evocative of her illumination.

Who else, besides Doechii, manages to land on former President Barack Obama’s Summer Music Playlist and collaborate with CTRL vocalist SZA ahead of the release of her debut album?

Furthermore, evidence of the instantaneous impact Doechii has made also lies in the Sarah C Prinz-directed music video for her “Crazy” single, which was banned from YouTube for it’s radically powerful imagery.

On top of all that, the Florida native made her television debut with a special performance on The Tonight Show Starring Jimmy Fallon last May, in addition to releasing her debut project She / Her / Black Bitch in August.

Thanks to Duke Deuce, the spirit of Memphis crunk music is alive and well.

Following the release of his debut album Duke Nukem last year, the Quality Control signee charged into 2022 with a full head of steam. Migos member Quavo recently added a verse to his Glorilla-featured banger “Just Say That.”

As if his Offset co-sign wasn’t potent enough, Duke Deuce received a major stamp of approval from crunk innovator and Three 6 Mafia member Juicy J when the Memphis legend recruited him for their “Step Back” collaboration.

More importantly, Duke Deuce earned an impressive DX review rating of 3.8 out of five stars for his sophomore album Crunkstar, which includes guest appearances from artist such as Doe Boy, Lil Yachty and Rico Nasty among others.

Yo Gotti’s Create Music Group signee EST Gee is one of those guys who feels like he’s been a Rising Star for years now, primarily due to his work ethic.

While still bubbling from the release of the deluxe edition of his Bigger Than Life or Death album, the Kentucky rapper joined forces with his CMG labelmate 42 Dugg for their collaborative Last Ones Left project and also contributed heavily to the label compilation project Gangsta Art.

EST Gee has also made his seemingly constant presence felt with a consistent stream of single releases, including his recent offering “Love Is Blind,” along with the guest verse he provided French Montana for their “Keep It Real” collaboration.

To top it all off, Geeski officially made it to the big leagues earlier this year in February when JAY-Z himself invited EST Gee to Super Bowl LVI so that the pair could hang out and connect in the studio.

Earl Sweatshirt co-signed lyricist Mavi has a bright future ahead of him.

In the years following the release of his 2019 debut project Lets Talk The Sun, the Charlotte native has aligned with artists such as Warner Records rapper IDK, who invited Mavi to join his Simple. World Tour, which he kicked off in June.

While Mavi, who studied neuroscience at Howard University, hasn’t delivered a full-length release since his 2021 End Of The Earth EP, 2022 isn’t over yet and he has shown signs of his resurgence recently via his “Tucked In” single.

It’s almost frightening how quickly Florida rapper Nardo Wick has blown up since releasing his debut song in 2020.

After connecting with Lil Durk, G Herbo and 21 Savage for the remix of his hit single “Who Want Smoke” last year, the 19-year-old MC has maintained his fast-paced lifestyle by delivering the deluxe edition of his Who Is Nardo Wick album in addition to embarking on his 20-date North American tour of the same name.

And on top of earning the co-signs of heavyweight artists such as Lil Baby and Future, who collaborated with the Jacksonville native on his fan-favorite record “Me Or Sum,” Nardo Wick was also stamped as one of the members of the 2022 XXL Freshman Class list, which includes DX Rising Star Doechii, Babyface Ray, Babytron, Big30 and more.

While most of DX‘s Rising Stars have been active and consistent all year, California rapper Remble appears to be somewhat of a late bloomer.

Following the release of his Lil Yachty-assisted “Rock Climbing” single last September, the “Touchable” rapper has seemingly gone ghost. In fact, he’s only surfaced from his seclusion periodically throughout 2022 to deliver his feature verse on Lil 9’s “Paper Plates,” single and for his recent interview with VladTV to discuss his connection to deceased L.A. rapper Drakeo The Ruler.

But according to Remble himself, his absence will be well worth it as he tweeted to his fans last minute, “This album I’m finishing up for y’all is dangerous. Who do you wanna hear on it?”

Like Doechii, SoFaygo inking a deal with Travis Scott’s Cactus Jack record label is proof enough that the Charlotte native is a star in the making.

However, since then, SoFaygo has gone on to earn the praises of Lil Uzi Vert, a spot on the 2022 XXL Freshman Class list, was named the “Top Independent Artist” by streaming platform SoundCloud and delivered his debut Cactus Jack project by way of his 2020 After Me album.

At this point, the sky is literally the limit for SoFaygo, who made noise early this summer upon the release of his B4PINK EP.

And the hype surrounding SoFaygo is only going to grow before the end of 2022 as the “Knock Knock” rapper recently announced the completion of his upcoming Pink Heartz album back in May.

Given we are still several months away from the reveal of DX‘s 2023 Rising Stars class, the staff has been hard at work chronicling the best new releases this year, so far. In the meantime, between time, check out the lists we have compiled of the Best Hip Hop, R&B and Rap albums, which include releases from Lupe Fiasco, Pusha T, Beyoncé, Drake and Kendrick Lamar, among others.