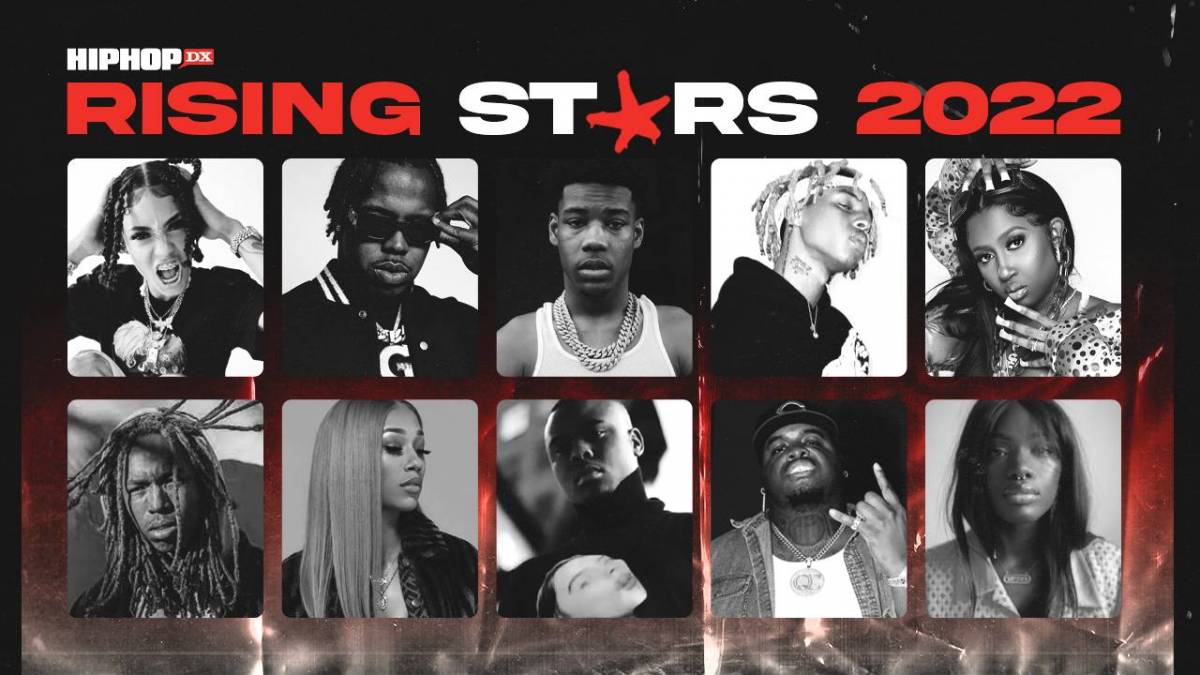 Time and time again, new rappers have proven to be the saving grace for the future of Rap music. It doesn’t matter if their energy is referred to as “TikTok” Rap or a trendier term, the game can always count on the newcomers to impact Hip Hop history.

Following up from the inaugural 2021 Rising Stars year, HipHopDX is proud to introduce our Rising Stars for 2022. Over the past year, we have monitored these 10 new artists and predicted their trajectory through their social presence and musical style. More than anything, their music has many qualities that make them worth checking out.

So what is a HipHopDX Rising Star, exactly? A Rising Star is a burgeoning talent we pinpoint within the year before or after their initial introduction and rollout of new rap music. These are the top artists that we feel have the ideal total package in terms of their musical sound, performance and genuine personalities.

Over the course of the year, we will highlight their career progression through exclusive features, interviews, playlists and other  surprises.

Much like our past new rappers’ iterations of Rising Stars (42 Dugg, BLEU, Blxst, DDG, Foogiano, Flo Milli, Morray, Sheff G, Sleepy Hallow and Toosii) the Rising Stars 2022 will undeniably set the bar for a fresh batch of talent for Hip Hop this year.

Read more about each artist’s 2022 so far and stay tuned for updates on our fresh new batch of HipHopDX Rising Stars! Baby Tate (formerly Yung Baby Tate) is a new voice amongst the “Rap girls” that simply can not be left out of conversations in 2022. Influenced by her famous mother Dionne Farris, Nicki Minaj, Migos and CeCe Peniston, the multi-talented rapper can not only spit a bar or two, but she can hold a note. Best known for her viral tune “I Am,” Baby Tate’s body-positive-women-empowered singles easily make her a 2022 HipHopDX Rising Star! Bia has been around a bit, but really made a name for herself in 2020, when her single “Whole Lotta Money” made a whole lotta buzz. Getting co-signed and a feature from Rap royalty Nicki Minaj herself, Bia proved that not only could she make charting music, but she can grab the attention of vets in the game. Having already worked with a few “big names” in the industry, Bia’s laid-back rhymes additionally pack a punch that solidifies her as a 2022 HipHopDX Rising Star! Coi Leray’s gender-neutral fashion style paired with her unique raspy tone continues to help her  dominate the domain of the internet with viral singles, like “No More Parties.” As Hip Hop runs through her bloodline, Coi has made sure to make a name for herself as an individual. As one of the most hyped upcoming artists hailing from New Jersey, HipHopDX is proud to announce Coi Leray as a 2022 Rising Star! Any Rap song titled “Yucky Blucky Fruitcake” could make anyone’s ears curious to hear what it’s about. Doechii (formerly known as Iamdoechii) undeniably stands out when it comes to colorfully stratifying her eccentric style and sound. As a newcomer already sharing stages with some big names, Doechii’s catchy flair and delivery solidifies her endless trajectory to stardom! Duke Deuce is finally in his prime as he’s been overlooked as a star on the broader spectrum. As an aspirational voice for Memphis, TN, Duke Deuce made waves all 2021 with his humorous personality, “jooking” dance moves, and ability to attract the vets in the game like Juicy J, Project Pat and Lil Jon. Having seen what buzz Duke Deuce can create on his own, it is without a doubt that he will continue to blow everyone away as a 2022 HipHopDX Rising Star! EST Gee really started gaining national attention with his feature on Lil Baby’s 2021 single “Real As It Gets.” Signing to Yo Gotti’s CMG label last year and dropping his debut mixtape Bigger Than Life or Death, EST Gee knocked down doors, forcing more eyes to be on him for the 2022 year. Stay updated to see what he does as a 2022 HipHopDX Rising Star! Mavi has been going viral for singles like “NUN NEW,” “Love of Money” and more. Getting cosigned by the likes of renowned artists Earl Sweatshirt and MIKE (all while being a Howard University student), Mavi has been expanding his fanbase and feeding them new music consistently – earning him a spot as a 2022 HipHopDX Rising Star! Nardo Wick has been on a fast-track to stardom ever since the unapologetic rapper sent out an invitation to anyone who wanted to test him. With his now certified platinum single “Who Want Smoke?” Nardo’s ability to make singles that take over social media is just one reason to watch him closely. Nardo’s catchy hooks and raw talent definitely makes him a 2022 DX Rising Star! Remble brings a fresh sound to the growing list of Rap’s newcomers. Carefully enunciating his lyrics and uniquely delivering hilariously detailed one-liners, Remble has become one of the most hyped new rappers of 2021. HipHopDX is excited to announce Remble as a 2022 Rising Star! SoFaygo hit the ground running with consistent content in 2021. Creating viral music within his short time of being out, he signed to Travis Scott’s label Cactus Jack Records in 2021. At only 19-years-old SoFayGo brings an energy that is unmatched and worthy of a 2022 HipHopDX Rising Star spot!

With this list, HipHopDX is showing that we’re looking for the next stars in rap, whether they spit ironclad bars or turn up the Auto-Tune and use their melodic abilities to craft a catchy hook. Hip Hop has become the most experimental and versatile genre in music and these artists all possess the ability to carve out their own paths in the rap game. Check out how our inaugural Rising Stars class of 2021 faired through the year here. Also take a look at our year end awards which feature many of the rising stars listed above.