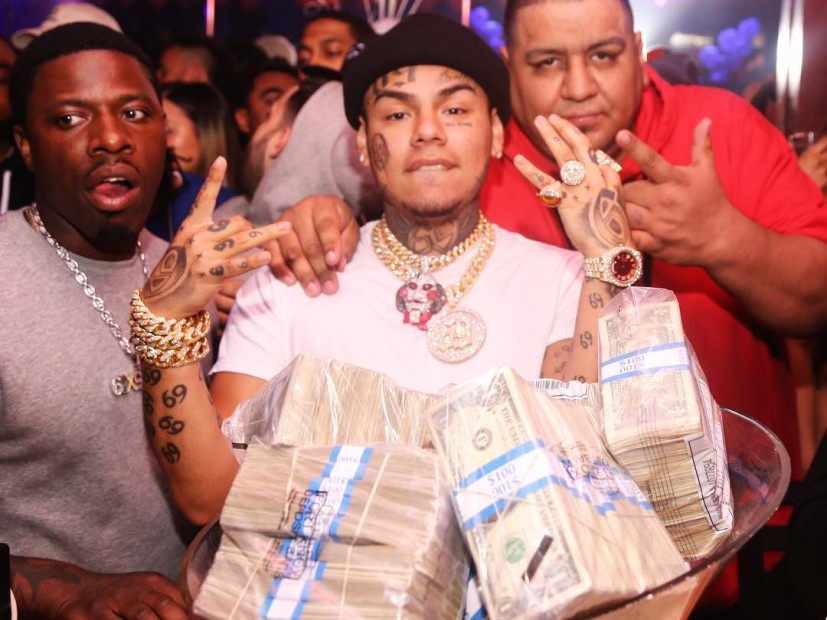 HipHopDX – This week in Hip Hop, Tekashi 6ix9ine found himself in some more drama with former music collaborator Trippie Redd when he accused Trippie of having sexual relations with Bhad Bhabie. J. Cole had an interview with Angie Martinez this week and crushed the widely held assumption that his KOD track “1985 (Intro To ‘The Fall Off’)” was directed toward Lil Pump. Lastly, T.I. was arrested outside his gated community for public drunkenness, disorderly conduct, and simple assault.

Trippie Redd originally disassociated himself from Tekashi 6ix9ine over sexual misconduct charges stemming from the Brooklyn rap star’s guilty plea of the use of a child in a sexual performance and the “GOTTI” rapper decided to hit back at his former collaborator with a similar accusation.

Earlier in the week, 6ix9ine went on to Instagram and in front of his 5 million followers accused Trippie of having sex with Danielle “Bhad Bhabie” Bregoli (also known as the Cash Me Outside girl). Trippie quickly responded with an IG post of his own and said he knew it was XXXTENTACION who gave him that information and that it is absolutely false.

To further clarify, Bregoli hopped on IG Live with 6ix9ine to let the world know the assertion she had sex with Trippie Redd is fake news. She revealed she shared a kiss with Trippie when he was 17 years old, making them both minors.

That should be the least of Tekashi’s worries, though. He’s been called out for not paying his jeweler, he reportedly has a warrant out for him after a fan accused him of choking him, and there’s a women’s advocacy group pushing for Spotify to remove his music from playlists.

Read more about the 6ix9ine vs. Trippie Redd vs. Bhad Bhabie drama here.

Lil Pump took J. Cole’s KOD track “1985 (Intro To ‘The Fall Off’)” to heart, responding to the track after many fans pinpointed him as the target. However, during a recent interview with Angie Martinez, Cole went on record saying it wasn’t about Pump but about this generation of young rappers capitalizing off the attention trolling gets you.

When Cole’s fans began chanting “Fuck Lil Pump” at JMBYLA 2018 in Texas earlier this month, the Dreamville boss shut the crowd’s shouts down. Although Pump never offered Cole the same consideration when his fans shouted out “Fuck J. Cole” during his Rolling Loud set in Miami, he recently showed love to him when TMZ caught him outside LAX.

Up-and-coming rapper YBN Cordae also had some words for Cole regardless in the form of a reworked version of “1985,” titled “Old Niggas.”

T.I. Arrested Outside His Mansion

After a night out, T.I. came home to his gated community after hours and was denied entrance because he didn’t have his key. Despite his wife Tiny calling the security booth to ask for the security guard to let him in, the police were called and he was eventually taken into custody. Authorities charged Tip with public drunkenness and disorderly conduct — which he called “small potatoes.”

Kevin Gates — Chained To The City

Too Short — The Sex Tape Playlist

Lil B Clarifies Only The BasedGod Can Curse People

In an exclusive interview with DX, Lil B discusses all those curses he’s put on various profession sports athletes such as Kevin Durant and more famously, James Harden, who he accused of not acknowledging him as the creator of the “cooking dance” he would performed on the court.

As of now, no one has any curses.

Read the full interview with Lil B here.

Veteran turntablist Kid Koala spoke to DX about his new album, Floor Kids: Original Video Game Soundtrack, which serves as the supplement to the Floor Kids video game. He also gave an update on new Deltron 3030 material, his group with Del The Funky Homosapien and Dan The Automator.

“When Del is ready to do it, I know Dan and I are absolutely ready to go,” Kid Koala says. “I have heard a couple of the beats already for the new one.”

MC Paul Barman released his debut studio album Paullelujah! back in 2002 and a lot in the music industry has changed since then. Speaking with DX, he addresses the aggressive changes the industry has experienced since his first album.

“That’s a tough one as it presupposes I know much about the music biz or that it, in fact, currently exists at all,” he says. “Streaming and internet has been a massive land grab. My real understanding is that when Virgin Records told the labels, “Hey $16 is too much, we need to reduce the price,’ the labels got greedy and raised it to $20. That was the tipping point. Used CDs were too cheap, of exactly the same quality, and then when Napster and CD burners came out, there was no goodwill and no more record stores. Also, the Twin Towers fell (bad), the internet happened (bad probably) and I had kids (mostly good).”